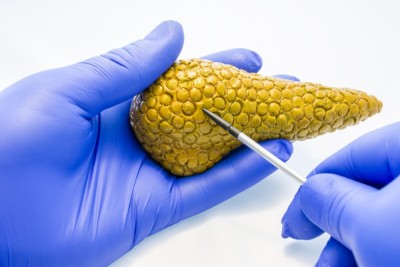 This article is most relevant for People with pancreatic cancer

PANCREATIC CANCER AT A GLANCE

In 2020, the impact of pancreatic cancer received much-needed media attention due to the passing of U.S. Supreme Court Justice Ruth Bader Ginsberg, U.S. House of Representative member John Lewis and Jeopardy! game show host Alex Trebek—who all died from the disease that year. They were preceded by many well-known figures including Dizzy Gillespie, Sharon Jones and Alan Rickman, profiled by WebMD to highlight the impact of this disease.

Although pancreatic cancer is rare, it is the third leading cause of cancer-related death in the United States, claiming more than 47,000 lives in 2020 and is projected to be the second leading cause of cancer deaths by 2030. The American Cancer Society estimates that more than 60,000 people in the United States will be diagnosed with pancreatic cancer in 2021.

What is pancreatic cancer?

Pancreatic cancer develops in the pancreas, an organ that aids in the digestion of food and the breakdown of sugar. The pancreas is located behind the stomach and around the upper portion of the small intestine. Pancreatic cancer starts when mutated cells of the pancreas begin to grow uncontrollably and begin to form a tumor (a mass of cells).

How is pancreatic cancer detected or screened?

Because the pancreas is located behind the stomach, early tumors are not easily seen or felt by healthcare providers during routine physical exams. People with pancreatic cancer usually have no symptoms until the cancer has become very large or has already spread (metastasized) to other organs. More than half (52 percent) of all pancreatic cancer cases are diagnosed as cancer and another third are found when the cancer is inoperable.  In all of these situations, the cancer is diagnosed at a point where it is treatable, but incurable.

Can pancreatic cancer be treated?

Pancreatic cancer tends to be aggressive—even when diagnosed at early stages—which makes it difficult to treat. Only 11 percent of people with pancreatic cancer are expected to live five years after their initial diagnosis. However, the chance of surviving up to five years is increased about fourfold with early detection, which also allows for better treatment outcomes.

Andrew M. Lowy, M.D., Chief, Division of Surgical Oncology at the Moores Cancer Center at University of California San Diego Health, spoke with CURE magazine about current pancreatic cancer treatments and drugs that are being studied in clinical trials to better treat the disease.

Where you receive care matters

“Pancreatic cancer is a complex disease,” said Dr. Lowey in the interview. “Patients (with pancreatic cancer) face several issues that range from managing their therapy, whether it be chemotherapy, radiation therapy or surgery, to managing other medical aspects.”

To help address these concerns, multiple healthcare professionals need to be involved in your cancer care. These multidisciplinary teams of professionals are more likely to be found at academic cancer centers that have expertise in treating pancreatic cancer. Pancreatic patients whose care is managed by a are likely to live an average of seven months longer than pancreatic patients who are not treated this way.

A may include the following health professionals:

Pancreatic cancer is treated with multiple therapies, including surgery (partial or total removal of the pancreas) or chemotherapy. “Like all cancers, the treatment selection is based on ,” Dr. Lowy says. “However, what’s different about pancreatic cancer is because it’s such an aggressive disease, every patient essentially will get chemotherapy at some point in their care.”

Chemotherapy is a drug treatment that uses chemicals to kill fast-growing cancer cells. According to Dr. Lowy, the best outcomes for treating pancreatic cancer are achieved when people receive chemotherapy in addition to surgery. Chemotherapy can be given as therapy (before surgery) or as an therapy (after surgery).

In the past, chemotherapy was often prescribed only after surgery in patients with disease to kill any remaining cancer cells. However, Dr. Lowy explains, this traditional approach has many disadvantages. “The thing to understand is that pancreas surgery is very complex. Despite the fact that we’ve gotten better at it, it is associated with a high complication rate. [It can take patients time] to recover from the operation to be able to get their chemotherapy. And so, by giving chemotherapy before the operation, when people are still in good shape before they have to undergo a surgical recovery, it ensures that we get that chemotherapy delivered.”

Dr. Lowy also notes that for people whose cancer has spread beyond the pancreas (advanced cancer), giving chemotherapy before surgery can determine if they will be a good candidate for the operation. If chemotherapy is successful in getting rid of cancer in other areas of the body, then that person would be considered a good candidate for surgery. If not, then surgery would not be considered beneficial.

Currently, three standard chemotherapy regimens are used to treat newly diagnosed pancreatic cancer. These include FOLFIRINOX (a combination of folinic acid, 5-fluorouracil, irinotecan and oxaliplatin), a combination of gemcitabine and nanoparticle albumin bound (nab)-paclitaxel (Abraxane), and Lynparza (a targeted also called olaparib). FOLFIRINOX is intravenous and usually given to people who are in good health due to its associated side effects. Gemcitabine and Abraxane is also intravenous and typically has fewer/different side effects than FOLFIRINOX so is favored if the patient who are not as healthy. Lynparza is a pill but is only offered to those people whose cancer is due to underlying , or mutations.

Although not a focus in the CURE article, it’s important to note that newer, targeted therapies and immunotherapies may be available to treat certain types of pancreatic cancer. The olaparib (Lynparza) is approved for (after chemotherapy) for people with an inherited or mutation whose cancer responded to platinum chemotherapy.

Tumor testing should also be used to try to identify other possible treatments for pancreatic cancer. For example, tumors that have the traits of deficient mismatch repair () or are high () or have a high tumor mutation burden on genomic profiling may respond to a type of known as immune checkpoint inhibitors. Pembrolizumab (Keytruda) is an drug with approval for treating cancers regardless of what organ the cancer came from.

Treatments that may be available in the future

According to Dr. Lowy, more therapies to treat pancreatic cancer are being tested in current clinical trials than any other time in history, and these therapies span different drug classes. The therapies include immunotherapies (drugs that prompt that your immune cells to fight cancer), cancer metabolism drugs (drugs that block cancer cell growth by cutting it off its energy source) and targeted therapies (drugs that target specific genes or the genetic material of certain cancer cells).

“Some of these drugs may be approved as soon as 2022 if they show effectiveness in treating pancreatic cancer,” Lowey concludes.  It is also important to consider that treatment of pancreatic cancer on a clinical trial, even if the clinical trial includes standard therapies, is associated with improved survival and other important clinical outcomes for patients. This is related to the extra attention to detail, coordinated services and expertise involved in treatment delivery on a clinical trial.

Some inherited mutations increase the risk of pancreatic cancer

Some inherited mutations, including , , , CDKN2A, , , and others, have been linked to an increased risk for pancreatic cancer.

If you have been diagnosed with pancreatic cancer, it is important to be selective about the facility you choose to receive treatment. This will ensure that you get the most effective and up-to-date treatment regimen for your disease. It is important to speak with your doctor about all options that are available to you, including a , treatments, and any clinical trials that may be beneficial for your cancer care.

The NCCN recommends the following screening for people at increased risk for pancreatic cancer:

NCCN recommends that people with inherited mutations in the following genes (with or without a family history of cancer) "consider pancreatic cancer screening" with MRCP or EUS:

NCCN guidelines recommend that people with an inherited mutation in one of the following genes and a family history of cancer "consider pancreatic cancer screening" with MRCP or EUS beginning at age 50 or 10 years earlier than the earliest pancreatic cancer diagnosis in the family: , , , , , , , , .

NCCN does not currently recommend pancreatic cancer screening for people with the above mutations who do not have a family history of cancer.

In February 2022, the ASGE released updated guidelines on pancreatic cancer screening for people with a or mutation. These guidelines recommended:

The following are studies looking at risk management for pancreatic cancer:

A number of other clinical trials for pancreatic cancer screening and prevention may be found here.

The following are studies enrolling people diagnosed with pancreatic cancer:

Other clinical trials for people with pancreatic cancer can be found here.

The following organizations offer peer support services for people with or at high risk for pancreatic cancer:

The following resources may be helpful for people with pancreatic cancer.