Personal Story: Pamela Munster's story of cancer in the family

In her essay in The Washington Post, Dr. Pamela Munster recounts her family's history with cancer associated with a mutation in the BRCA2 gene. She details her father's extraordinary journey with pancreatic cancer, one of the most aggressive and deadly cancers. (11/27/18) 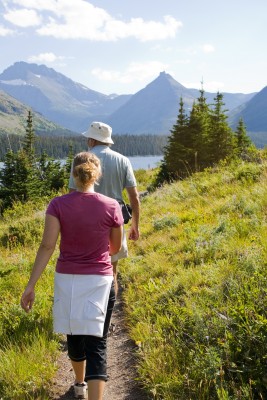 a personal story about a father and daughter with an inherited mutation.

Doctors are people too

Dr. Pamela Munster is a breast cancer oncologist at University of California, San Francisco. When she was diagnosed with breast cancer at age 48, she found that she carried a mutation. Women carrying mutations have a 45-56% risk of breast cancer and 23-31% risk of ovarian cancer by age 70. Dr. Munster had a double mastectomy as part of her treatment.

"Despite my years as a practicing oncologist—specializing in breast cancer, of all things—I was not prepared for it to come to me."

A family history from her father's side

mutations may be inherited from either side of the family with the same impact - increased risk of breast and ovarian cancer. In Pamela Munster's family, her paternal grandmother Gertrud was diagnosed with breast cancer at 65. Gertrud survived her breast cancer and was diagnosed with pancreatic cancer which lead to her death in her 80's. Pamela's father voiced words of concern at her surgery they proved prophetic:

"This is just not right...This should be me, not you! You should not have to go through this at your age."

Pancreatic cancer is the fourth most common cause of cancer death. Five year survival rates are low—less than 9%—in part due to these cancers being found late. Pancreatic cancer has been called a "silent disease" because symptoms, which mimic those of more common diseases, are often not recognized until the cancer has advanced.

At the time of his pancreatic cancer diagnosis, Norbert's doctor stated that surgery was not an option due to his age and the size of his tumor. Dr. Munster, her father's self-stated "advocate and protector" asked his doctor whether treatment would be an option if they could successfully shrink the tumor. She said to her father:

"The odds are against you...But knowing you, I think you would rather go down in flames than not try at all."

They proceeded with aggressive chemotherapy knowing that side effects might be difficult to tolerate and that the treatment might not work. This tradeoff between the hope of treatment and the decrease in quality of life while enduring treatment is one that is balanced differently by each individual. Fortunately, Norbert's tumor responded to chemotherapy and in eight weeks was reduced to half its original size when it was surgically removed.

Tumors of carriers are more sensitive to some chemotherapy treatments

The responsiveness of Norbert's tumor to chemotherapy, while surprising, may reflect the biology of the mutation. Because cells with mutations lack functional protein, their ability to repair damage, including damage in tumor cells that is caused by chemotherapy, is impaired. This poor repair can also lead to other mutations which contribute to increased cancer risk in people with mutations.

The story is not over

Five years after his diagnosis, Norbert is still alive. However, his pancreatic cancer returned two years following his surgery. He underwent more chemotherapy and radiation treatments and is now living with cancer.

As Dr. Munster points out:

" cancer is an ongoing battle. It requires steadfast support, resources, stamina, and, most of all, courage and hope. There are endless setbacks and bad days. But seeing my father emerge from his struggle, my own blue eyes meeting his, I am proud. We are now connected by more than blood and ."

She notes that her father's life long habits of exercise and good diet were important. While she does not suggest that these lifestyle choices impacted his cancer, his good physical health before chemotherapy did mean that he was in a better state to endure the difficulties of cancer treatment.

For more about Pamela and Norbert Munster's cancer journey, you can read Dr. Munster's book Twisting Fate: My Journey with - From Breast Cancer Doctor to Patient, and Back.

People who test positive for an inherited mutation in , ,  and other genes, have an increased risk of pancreatic cancer. There are no reliable and proven tests for early detection of pancreatic cancer. While experts do not have guidelines for pancreatic screening for everyone at increased risk, there has been some research looking at a procedure known as endoscopic to find abnormalities in the pancreas of high risk people. Endoscopic (EUS) involves the doctor passing a tiny into the patient's stomach to get a closer look at their pancreas. EUS requires anesthesia. Some cancer centers offer endoscopic screening for people with an inherited mutation and a family history of pancreatic cancer although in many cases the procedure is only available through a research study.

Knowing the signs and symptoms of pancreatic cancer may be helpful. Symptoms include:

Munster P. Twisting Fate: My Journey with —from Breast Cancer Doctor to Patient and Back".

People with an inherited mutation linked to cancer

The NCCN recommends the following screening for people at increased risk for pancreatic cancer:

NCCN recommends that people with inherited mutations in the following genes (with or without a family history of cancer) "consider pancreatic cancer screening" with MRCP or EUS:

NCCN guidelines recommend that people with an inherited mutation in one of the following genes and a family history of cancer "consider pancreatic cancer screening" with MRCP or EUS beginning at age 50 or 10 years earlier than the earliest pancreatic cancer diagnosis in the family: , , , , , , , , .

NCCN does not currently recommend pancreatic cancer screening for people with the above mutations who do not have a family history of cancer.

In February 2022, the ASGE released updated guidelines on pancreatic cancer screening for people with a or mutation. These guidelines recommended:

The following are studies looking at risk management for pancreatic cancer:

A number of other clinical trials for pancreatic cancer screening and prevention may be found here.

The following are studies enrolling people diagnosed with pancreatic cancer:

Other clinical trials for people with pancreatic cancer can be found here.

The following organizations offer peer support services for people with or at high risk for pancreatic cancer:

The following resources may be helpful for people with pancreatic cancer.