Study: Resistant starch may help prevent some cancers in people with Lynch syndrome 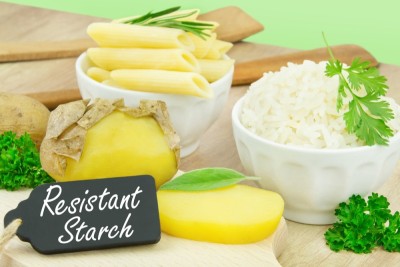 “A banana a day”: Starch supplement may reduce the risk of some hereditary cancers

This study is about whether resistant starch in a diet can reduce the risk of colorectal or other non-colorectal cancers in people with .

People with have an increased risk for various cancers, such as colorectal, endometrial,  upper gastrointestinal (GI), pancreatic, bile duct and others. The upper GI tract (food pipe) includes the esophagus, stomach and the first part of the small intestine or duodenum (see image below). Upper GI cancers can be found in these organs as well as the pancreas and bile duct. 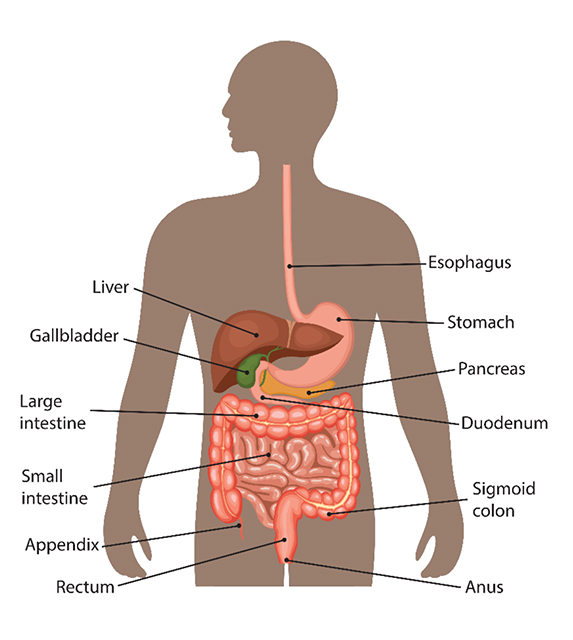 Screening for upper GI, pancreatic and bile duct cancers can be challenging. The survival rate for these cancers tends to be lower than for other Lynch syndrome-associated cancers. Therefore, it’s important to find better prevention measures, particularly for non-colorectal GI cancers.

is caused by an inherited mutation in one of five genes:

People with have an increased risk for colorectal, endometrial, ovarian, stomach, small intestine, pancreatic, bile duct, urinary tract, brain and skin cancers; the risks for these cancers vary depending on the gene.  For this reason, people with are encouraged to speak with a genetics expert to understand their risk for different cancers.

What is resistant starch?

There is strong evidence that a higher intake of dietary fiber lowers the risk of colorectal cancer and other diseases in the general population. Because resistant starch, which is a component of dietary fiber, is broken down in the large intestine by gut microbes, researchers wanted to know whether this is a way that dietary fiber may protect against colon cancer, specifically in people with .

Researchers looked at people with who had inherited a mutation in , and . In this study, any Lynch syndrome-associated cancers outside of the colon and endometrium are referred to as non-colorectal cancers.

Participants were randomly placed into one of two treatment groups:

Overall, the result of this study does not change clinical care or risk-reducing decisions for people with . While it suggests that adding resistant starch may help reduce non-colorectal upper GI cancers, more studies are needed to confirm this observation. However, it is exciting to see that future non-invasive prevention measures may be possible for people with .

If you have , you may want to talk with your doctor to see if incorporating more resistant starch into your diet is appropriate.

This study reports on some of the data from the Colorectal Adenoma/Carcinoma Prevention Program 2 (CAPP2) study, a first-of-its-kind effort that was designed to test whether daily aspirin and/or daily resistant starch prevents colorectal cancer in people with .

There are limited options to lower the risk of non-colorectal cancers such as cancers in the upper gastrointestinal (GI) tract in people with . Researchers of this study wanted to know whether incorporating resistant starch into the diet of patients would lower their risk of colorectal and non-colorectal Lynch syndrome-associated cancers.

The participants were people who were over age 25 and with . Participants had an inherited mutation in , and/or (people with or mutations were not included in this study) or were members of a high-risk family according to the Amsterdam diagnostic criteria for . This is a set of diagnostic criteria used by doctors to diagnose in individuals who have not had genetic testing.

Participants who had previously been cured of cancer and still had their colon were also eligible. Colonoscopy and clearance of any found polyps were prerequisites within three months of study recruitment. Patients diagnosed with bowel cancer were excluded for a year if their tumor was Duke A (cancer only in the mucosa or cell lining of an organ such as the stomach), two years if their tumor was B (cancer that has advanced to the outer layer of cells of the stomach but not to the ) and five years if their tumor was C (positive ) or D ().

This was a double-blind study. To ensure that neither participants nor researchers knew who was getting resistant starch, cornstarch (an inactive alternative to resistant starch) was used as a .

Participation included a colonoscopy at study entry and exit after two years, in addition to routine screenings. Participants were treated daily for two years with 30 grams of resistant starch (called Novelose) or (cornstarch taken in two separate doses). After two years, participants had the option to continue for two more years. After that, some participants consented to have a follow-up of 10 years or more, up to 20 years.

Participants were placed randomly (via computer) into one of 2 treatment groups:

At the end of treatment and through long-term follow-up, researchers gathered information on whether participants were diagnosed with colorectal cancer or other Lynch syndrome-associated non-colorectal cancers.

The analyses presented below presents data for  the entire CAPP2 cohort at 10 years as well as at 20 years for participants in England, Finland and Wales. Information on cancer diagnoses was obtained from national cancer or clinical registries.

The aspirin results from this study, presented previously, have already changed the standard of care for people with in the United Kingdom (UK). Based on the results of the study, the National Institute for Health and Care Excellence (NICE) in the UK now recommends that people with take daily aspirin for more than two years to prevent colorectal cancer. Read more in our XRAY review here.

The researchers were surprised when the trend of reduced colorectal cancer risk that was shown in participants who had daily resistant starch in previous studies did not occur in this study.

For people with , resistant starch does not alter colorectal cancer risk, but it does lower the risk of non-colorectal Lynch syndrome-associated cancers, especially upper GI cancers. Since screening, diagnosis and management of these cancers are difficult, this finding could lead to a change in the standard of care for people with to help reduce their risk for upper GI cancers. It is important to continue to study this association with more people with as well as the general population to determine whether resistant starch and dietary fiber reduce the risk of GI cancers in the broader non-hereditary cancer population.

Share your thoughts on this XRAY review by taking our brief survey.
posted 10/17/22

“A banana a day”: Starch supplement may reduce the risk of some hereditary cancers

Medical News Today: “A banana a day”: Starch supplement may reduce the risk of some hereditary cancers
Rating: 5.0 Stars