Some patients with early-stage breast cancer or those considering risk-reducing surgery may choose mastectomy without reconstruction. This is often referred to as “going flat.” The results of this study suggest that surgeons play a significant role in supporting a patient’s decision to go flat. (3/23/2021) 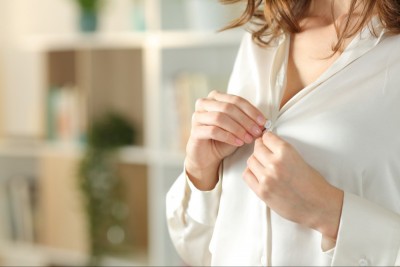 This article is most relevant for Women considering mastectomy without breast reconstruction.

This study focuses on patient experiences and satisfaction with their decision to undergo mastectomy without reconstruction.

The Breast Cancer Patient Education Act, passed in 2015, is federal legislation to help spread information on the availability and coverage of breast reconstruction, prostheses, and other options for breast cancer patients, especially patients who are members of racial and ethnic minority groups. The Women’s Health Care and Cancer Rights Act, enacted in 1998, requires health plans that provide coverage for breast cancer care to include coverage for breast reconstruction. However, many patients remain unaware of these rights.

This study looks at the motivations, experiences, and satisfaction of patients who chose to go flat. The results suggest that surgeons play a significant role in supporting their patients’ decision to go flat.

What does it mean to go flat?

If you choose to go flat, your breast tissue and most of your breast skin are removed, leaving your chest flat or slightly concave. Your mastectomy incision will typically run across the middle of your chest. You can ask your surgeon for an "aesthetic flat closure" as defined by the National Cancer Institute, so they understand you want a smooth, flat chest.

FORCE has created a Post-mastectomy Photo and Video Gallery with images and videos of individuals after mastectomy and reconstruction. The gallery includes images of those who have decided to go flat. You must obtain access before viewing the gallery.

An online survey was completed by 931 women who had either breast cancer or risk-reducing surgery. Leaders of online breast cancer and Going Flat communities were encouraged to share the survey with their members. Going flat was the primary choice of most participants (73%).

If you are considering going flat after mastectomy and need additional support, you may find support in online communities or with surgeons whose practices are exclusively devoted to breast surgery.

For women with breast cancer, surgical options include breast-conserving surgery, surgery followed by breast mound reconstruction and mastectomy without reconstruction, known as “going flat.” Cancer outcomes are similar regardless of the type of surgery.

Studies have reported conflicting results regarding quality of life and patient satisfaction with breast reconstruction compared to mastectomy alone.

Despite information about and access to breast reconstruction, some women choose mastectomy alone. Over the years, online communities have been established to provide information and support to women who are considering mastectomy. Together, these communities are the basis of the Going Flat movement. Importantly, the Going Flat movement has identified the concept of “flat denial” among surgeons who either do not offer the option of mastectomy alone, discourage women from going flat, or who leave excess skin to aid in later reconstruction against the patient’s wishes.

Whether experiences of those who are active in Going Flat communities reflect reports in scientific literature, particularly what motivates a patient to have a mastectomy alone as well as their satisfaction with outcomes. Researchers also wanted to better understand patients’ experiences of flat denial.

A patient experience survey was designed to capture the outcomes and experiences of service and support for patients who opted for mastectomy alone. Patient advocates contributed significantly to the survey development process.

The survey was posted online via Facebook, Twitter and a personal blog for one week (October 15, 2019-October 21, 2019). Participants in online Going Flat communities were encouraged to participate.

The survey consisted of 36 questions. Some questions regarding satisfaction with surgical outcomes and support by surgeons of the patient experience were scored using a 5-point Likert scale. The survey also included questions about demographics and clinical questions.

Of the 931 eligible participants, the average age was 49. Most respondents were white (94%) and had private health insurance (71%). Mastectomies were primarily done in the United States (79%) but participants from 22 countries were represented.

Most respondents had mastectomy (80%). Some patients initially had breast reconstruction that was eventually removed (15%). Of these women (139), the reason for removal was a problem with the implant (96/139; 70%).

The two most common reasons for going flat were the desire for a faster recovery and to avoid having foreign substances in the body. Few patients reported cost as a factor in their decision.  About half of participants reported that they did not think their breasts were important for body image, while 23 percent included this as one of the top two reasons they considered going flat.

This study found that most participants were satisfied with their surgical outcomes. This result is different from other studies which have reported lower levels of satisfaction for patients who have had mastectomy alone.

This study also found that flat denial, which indicates the extent to which patients felt unsupported by their surgeons, was experienced by 22 percent of respondents. This finding is consistent with other reports.

While this study reported that most women are satisfied with their outcomes, some patients reported that their surgeons did not support their decision to go flat. This suggests that there is a need for more research better surgeon education and tools to guide and support women who are not interested in breast reconstruction.

Share your thoughts on this XRAYS article by taking our brief survey.
posted 3/24/2021

NCCN has outlined principles of breast reconstruction or going flat following mastectomy surgery.  These include the following: