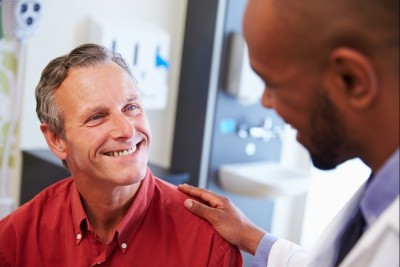 These studies are about:

How a new technology may be useful to detect spread of prostate cancer in men with newly diagnosed disease or in those whose cancer returns after treatment.

Why are these studies important?

Prostate cancer is the second most diagnosed cancer in men. About seven percent of all prostate cancers are in advanced stages (spread beyond the prostate) at the time of diagnosis.

These tests can show if the cancer has spread to other organs. However, they sometimes do not detect spread of the disease.

PET/CT scans combine two types of imaging—PET scans (positron emission tomography) and CT scans (computerized tomography)—in one test. PET/CT requires injection of a small amount of a radioactive drug known as a tracer. After injection, the tracer spreads through the body. The PET/CT scanners detect areas in the body where high amounts of the tracer are found. This allows doctors to to look for cancers and see how tissues and organs are working.

Metastatic prostate cancer (cancer that has spread to other organs) requires more aggressive treatment and can lead to death. Doctors use standard tests to group prostate cancers by risk for recurrence and spread and use this information to guide treatment. The main risk goups include:

These studies compared the 18FDCFPyL PSMA screening technology to standard imaging for prostate cancer spread, which includes XRAY, MRI and CT. The studies looked at two groups of men:

All 268 participants had imaging with 18FDCFPyL PSMA.

The CONDOR study tested whether 18FDCFPyL PSMA was better at detecting prostate cancer that returned after treatment compared to standard imaging.

The study included 208 men with prostate cancer who were treated with androgen therapy (testosterone depleted) and received other treatments (prostatectomy, radiation therapy, etc.) for prostate cancer. Blood tests given to men after treatment suggested a return of cancer but could not be confirmed by standard imaging.

During the CONDOR study, participants underwent imaging with 18FDCFPyL PSMA.

Side effects of 18FDCFPyL PSMA

Among the OSPREY and CONDOR studies, the most common side effects related to 18FDCFPyL PSMA tracer included:

Strengths and limitations of the OSPREY and CONDOR studies

18FDCFPyL PSMA is not FDA-approved for use outside of research studies, and the OSPREY and CONDOR trials are completed. However, other clinical trials looking at 18FDCFPyL PSMA as a technology to detect prostate cancer are recruiting participants (see Clinical Trials below). If you are at high risk of developing advanced prostate cancer, talk to your healthcare provider to see if you may be eligible for an ongoing clinical trial.

Multiple imaging techniques are FDA-approved to determine the spread (metastasis) and severity of prostate cancer. These may include:

Genetic testing for an inherited mutation

NCCN recommends genetic testing for an inherited mutation of people who have been diagnosed with prostate cancer and have:

Genetic testing results may be used to make treatment decisions. For example, in 2020 the FDA approved the PARP inhibitors Lynparza (olaparib) and Rubraca (ruparib) for treating men with a BRCA mutation whose prostate cancer relapsed after hormone therapy or chemotherapy.

The NCCN also recommends that people keep a copy of all their test results. (Online patient portals are a great way to access test results.) This can come in handy during a second opinion, if necessary.

While multiple imaging tests (e.g., X-rays, MRI, CT or bone scans) are FDA-approved as diagnostics to view the spread of prostate cancer, they are limited. Some imaging tests for prostate cancer have been observed to miss the spread of the disease, while other techniques have detected abnormalities that are unrelated, resulting in “false positives.”

In the OSPREY and CONDOR clinical trials, researchers looked at 18FDCFPyL PSMA PET/CT as a possible imaging diagnostic to better detect prostate cancer and its spread to nearby organs compared with standard imaging.

18FDCFPyL PSMA uses positron emission tomography/computed tomography (PET/CT) imaging, which uses a radioactive drug to detect levels of prostate-specific membrane antigen (PSMA). The PSMA protein is normally found at a low level in normal prostate cells, but it is significantly increased in prostate cancer cells. PSMA can be detected in other organs as prostate cancer spreads.

If 18FDCFPyL PSMA is confirmed by future studies to better detect the spread of prostate cancer to other organs, it could be a useful diagnostic for accurately staging the disease at initial diagnosis and relapse in men who were previously treated for the disease.

Researchers of the studies wanted to know:

If 18FDCFPyL PSMA can locate the spread of prostate cancer in newly diagnosed men and in men whose cancer returned after treatment.

OSPREY was a phase 2 and 3 clinical trial that was held at 10 sites throughout the U.S. and Canada. The primary goal of the study was to test whether 18FDCFPyL PSMA PET/CT could detect spread of cancer to pelvic lymph nodes (organs near the prostate gland).

The study included 268 men, ranging from ages 46 to 84, with newly diagnosed high risk prostate cancer. Of these, 252 men were candidates for radical prostatectomy (complete removal of the prostate). Prior to the study, all participants had standard imaging to detect metastasis (spread) of cancer.

During the study, participants were given 18FDCFPyL PSMA by injection. Two hours prior to PET/CT scans, patients were injected with radioactive 18FDCFPyL PSMA that specifically targets PSMA throughout the body. (Data from PET/CT scans were tabulated by three PET/CT readers who were blinded to all participant clinical information.)

Among the 252 men in the study who had surgery to remove their prostate gland and nearby lymph nodes that could be looked at to confirm if the cancer had spread or not.

Most common side effects related to 18FDCFPyL PSMA included:

(Findings of this trial were presented at a meeting. Due to time constraints, presenters were not able to present all aspects of the study. Limitations listed below may be addressed in detail in a follow-up manuscript.)

CONDOR was a phase 3 multicenter clinical trial performed at 14 sites throughout the U.S. and Canada. The study’s primary endpoint was whether 18FDCFPyL PSMA has the capability to detect the return of prostate cancer in men who were previously treatmented for the disease.

Blood tests were given to the men during posttreatment follow-ups. Increases in prostate-specific antigen (PSA) levels that were greater than two nanograms/milliliters suggested possible return of cancer. At the start of the study, patients underwent standard imaging and completed questionnaires about their plans to treat relapse.

During the trial, participants underwent imaging with 18FDCFPyL PSMA PET/CT. They were injected with nine millicuries of the radioactive drug 18FDCFPyL PSMA one to two hours prior to having PET/CT scans.

The most common side effects related to 18FDCFPyL PSMA PET/CT included:

(Findings of this trial were presented at a meeting. Due to time constraints, presenters were not able to present all aspects of the study. Limitations listed below may be addressed in detail in a follow up manuscript.)

Detecting the spread of prostate cancer to other organs is necessary to accurately stage and determine the severity of the disease. More accurate staging can help men make better decisions on treatment options for prostate cancer. Based on the studies’ findings, 18FDCFPyL PSMA PET/CT detected almost eight times more metastases among OSPREY participants and 62 times more cancer among CONDOR participants when compared with standard imaging. These data suggest that newer diagnostics are needed to improve the standard processes for staging and detecting the spread of prostate cancer.

OSPREY and CONDOR clinical trials looked at the capability of 18FDCFPyL PSMA PET/CT to detect prostate cancer in newly diagnosed men and in castrated men who relapsed after prostate cancer treatment. If confirmed in future studies, imaging techniques that detect the increase and spread of PSMA using PET/CT scans could be better methods to determine metastasis and staging of prostate cancer compared with standard imaging.

These studies were relevant because they

These studies are particularly relevant for the 20% of prostate cancer patients who have high risk disease.