The number of people diagnosed with metastatic prostate cancer increased following a change in recommendations around the use of routine prostate cancer screening. (posted 6/13/22) 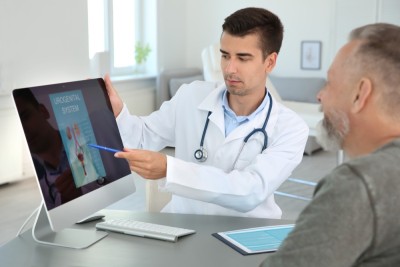 As use of PSA test fell, rate of advanced prostate cancers rose

This study reports on trends in the diagnosis of prostate cancer between 2004 and 2018. The study authors draw a connection between an increase in cases and a decline in the use of testing for cancer screening. They look at the increase in cases between 2010-11 and 2018 during a time when changes in screening guidance were issued by the United States Preventive Services Task Force ().

cancer is the most common cancer among men. Approximately 1 in 8 men will develop cancer in their lifetime. cancer is the second leading cause of death among American men. Black men are more likely to die of cancer than men of other races.

The screening test for cancer is called a prostate-specific antigen () test. It is a blood test that measures the level of in the blood. is a protein found in both normal cells and cancer cells. A higher level is linked to an increased risk of cancer. The test has been used to screen for cancer since the early 1990s.

Despite the prevalence of cancer, the use of cancer screening is not straightforward for these reasons:

As a result, screening became controversial. It was not clear if the overall benefit of frequent screenings outweighed the risks. The U.S. Preventive Services Task Force changed its guidance in 2008 to recommend against cancer screening after age 74. In 2012, it expanded this recommendation to include people 45 and older.

This study looks at trends in prostate cancer diagnosis over a period when use of the screening changed. It attempts to understand how these changes affected the number of men being diagnosed with disease. This study looked at these trends through 2018. The findings may inform public health guidance around the use of cancer screening in the future.

screening guidelines and changes over time

The ’s cancer screening guidelines have changed over time and continue to be updated as doctors learn more.

In 2008, the USPTF looked at data on the drawbacks of screening, particularly:

Based on this evidence, the recommended against screening for men 75 and older. The change led to a decline in cancer cases among older men.

A few years later, the extended this guidance to all men over 45. Starting in 2012, annual tests were not recommended for anyone over 45. Fewer people were diagnosed with cancer in the years that followed.

The guidelines for screening focus on shared decision making between patients and clinicians. This chart describes the guidelines issued by three key organizations – the U.S. Preventive Services Task Force, the National Comprehensive Cancer Network, and the American Cancer Society. All three groups support discussion between patients and clinicians about the uncertainties, risks and benefits of screening. The age at which each organization recommends this conversation should start varies.

This study looked at trends in cancer diagnosis, specifically in the diagnosis of or 4 cancer. The researchers analyzed data on cancer cases from the Surveillance, Epidemiology, and End Results () database.

The database includes information on more than 800,000 people with cancer. The study looked at rates of prostate cancer by two age groups – men ages 45 to 74 years old and those 75 and older.

The data showed an increase in prostate cancer diagnoses starting in the years 2010-2012. This upward shift in later cancer occurred at a time when the overall number of cancer cases was lower. Broken down by age group, the data show:

These trends were seen across all races but were especially significant in non-Hispanic white men.

This report suggests that the increase in cases beginning in these years is a result of the changes in screening guidance. Fewer screenings led to delays in diagnosis, resulting in more cases being found at the stage.

This study documents what some in the medical community may have expected – that screening for cancer less often can lead to more cancer cases being found at a later . It does not provide information on whether more people will die of cancer because of less screening. In fact, some research has shown that annual cancer screenings do not result in fewer deaths from cancer.

This study looked at cancer cases through 2018. In 2018, the updated its recommendation. The revised guidance, which still stands, says that men between 55 and 69 years old should decide whether and how often to get screened based on a discussion of the potential benefits and harms with their doctors. Doctors should not order tests for men who do not want to have the test. The recommendation not to do annual screenings of men over 70 currently stands. The American Cancer Society (ACS), the National Comprehensive Cancer Network (NCCN), and the American Urological Association offer similar guidance, with ACS encouraging conversations starting at age 50. Refer to the table for updated screening guidelines, which vary based on risk. People with an inherited mutation in a gene linked to cancer are advised to start screening conversations earlier. Similarly, for Black men, screening usually begins at an earlier age; however, whether this is beneficial requires more research.

testing for average risk men remains somewhat controversial for reasons mentioned earlier. Yet, doctors have been trained to take more care now to balance the risks and benefits of screening and treatment. They seek to avoid possible harm from invasive procedures or unnecessary treatment by following up on a high test with:

At the same time, doctors still aim to quickly treat cancers that could develop into prostate cancer. This may include gathering additional information, including personal and family health history, testing of the cancer, and genetic testing for an inherited mutation.

Even though the guidelines focus on informed individual decisions, a new study found that 26% of cancer centers still recommend the test for all men starting around age 50. More than three-quarters of cancer centers (78%) do not recommend an age at which to stop screening.

The diagnosis of prostate cancer is on the rise. The increase began in the years after USPTSF recommended against screening. The assumption of these authors was that doctors likely followed the revised screening recommendations and used testing less often.

Since this study was completed, screening guidance has changed again. The current guidance encourages discussion about screening for men starting at 50 or 55 and ending at age 69. It encourages shared decision making between doctors and patients. More research is needed to see how this approach will affect cancer cases over time. Some research also suggests that doctors do not uniformly follow the guidance of major public health and medical organizations.

If you are male or were assigned the sex male at birth, you may have questions about whether to get a test. Your doctor may ask you if you are interested in testing. Doctors who follow current guidelines (refer to table), will talk with you about the possible risks and benefits of having or not having the test. Your doctor should assess your personal risk for cancer as part of this discussion.

This conversation can help you decide what to do. If your doctor has not discussed testing with you, you should bring it up. When you talk with your doctor, be sure to share:your personal and family history of cancer on both sides of the family. Having a family history of or other cancers or being Black may increase your risk. Some inherited mutations, including and , can also increase the risk for cancer. These genes are also linked to breast, ovarian and pancreatic cancers. Inherited mutations in are linked to an aggressive cancer that is more likely to become . Depending on the gene, men at increased risk for cancer due to an inherited mutation may have different screening recommendations than men without mutations.

Some doctors recommend a digital rectal exam (DRE) along with a test. In DRE, the doctor exams the area by inserting a finger in the rectum. This exam can be helpful, especially if performed by a skilled doctor, but it also can miss cancers.

If you decide to screen and your screening test shows a high level, talk with your doctor about next steps. Increasingly, doctors recommend keeping an eye on the level and other symptoms in otherwise healthy people before rushing into a biopsy or treatment. Your doctor may call this “watchful waiting” or “active surveillance.”

Disclosure: FORCE receives funding from industry sponsors, including companies that manufacture cancer drugs, tests, and devices. All XRAYS articles are written independently of any sponsor and are reviewed by members of our Scientific Advisory Board prior to publication to assure scientific integrity.

Of note, there are many other guidelines, some of which are considerably different than these.

The following are studies looking at ways to screen for cancer in people at high risk:

As use of PSA test fell, rate of advanced prostate cancers rose

Incidence of metastatic prostate cancer up from 2010 to 2018

Consumer Health Day:  Incidence of metastatic prostate cancer up from 2010 to 2018