Which patients are at risk for a relapse of early-stage breast cancer? Tests to predict recurrence would help find people who need more monitoring after treatment and provide a chance to find and treat them earlier. This study looked at whether a blood test for tumor DNA (called circulating tumor DNA or ctDNA) is useful for finding people with recurrence earlier than current clinical practice. (11/4/19) 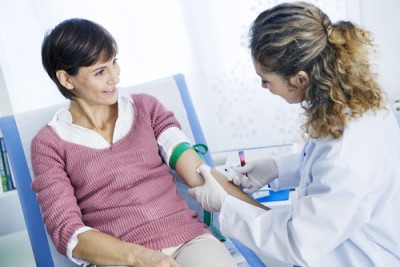 Whether a test for circulating tumor () might be useful for finding patients who are at increased risk of recurrence.

This study looks at whether one test, the detection of , is a reliable predictor of patients with breast cancer who will relapse. A test that predicts recurrence before it is currently clinically detectable would allow earlier or perhaps different treatment and may improve survival outcomes.

Most breast cancer will respond well to treatment without recurrence. However, some breast cancers may recur. For this reason, current guidelines recommend follow-up doctor visits after treatment. Finding recurrence earlier may provide patients with more treatment options. Once your treatment ends, it is important to speak with your doctor about your post-treatment follow up care, including a discussion of:

Research on detection as a tool to monitor relapse is ongoing. While this test is  promising, it has not yet been shown to improve survival outcomes in patients. Longer follow-up to testing is needed to determine if this information may be clinically useful.

Relapse or recurrence is attributed to small groups of cancer cells that remain after treatment (called “molecular residual disease” or “MRD”). There are too few of these cells to observe easily. When these remaining cancer cells may migrate to other parts of the body they are called metastases. Early detection and treatment is optimal for patients who relapse.

But what is the best way to predict who will relapse and who will not? Those remaining tumor cells will sometimes lead to tumor in the blood of patients, called circulating tumor or . Tumor cells in patients with in their blood may subsequently grow until they are clinically detectable and/or causing symptoms—a recurrence of their primary cancer.

This study’s researchers wanted to know whether detection accurately predicts the chance of recurrence in breast cancer patients. The key to using is to find a mutation that has occurred only in the tumor during its growth (not an inherited mutation). To do this, from the primary tumor is sequenced to find mutations that differ from the patient's non-tumor . These mutations act as a signature of the tumor cells.

Whether in a patient's blood indicates that they are at greater risk of relapse. The underlying question is whether detection might be a useful tool clinically for identify patients at increased risk of relapse.

This study included 170 women with a mean age of 54 years from 5 UK hospitals.

All patients had primary breast cancer with no evidence of metastases by standard monitoring methods.

To determine if was a useful tool to predict relapse, blood samples from each participant were taken before and after their initial treatment. At the time of surgery, each participant's primary tumor was sequenced to identify mutations that uniquely identified the tumor cells. Blood samples from patients were then collected every 3 months for the first year and 6 months in subsequent years for up to 5 years. Each sample was tested for the presence of tumor-specific (), and data was collected about whether the patient had experienced a relapse.

To have sufficient numbers for a comparison of different cancer subtypes, data analysis of the group of 101 participants was combined with data from the initial proof-of-principle study of 43 patients, for a total group of 144 patients. Among these 144 patients, 29 relapsed during the study.

Of 170 patients participating in this study, 101 had a tumor-specific mutation:

Blood samples and personal cancer history were collected over an average of 35 months from the 101 participants with an identified tumor mutation.

Among the 101 participants in this study, the presence of in the blood was associated with subsequent relapse.

2. was similarly useful as a predictor of relapse for all breast cancer subtypes examined (HER-positive, HER-negative, triple-negative cancers).

To have sufficient numbers for comparison of different cancer subtypes, data from the group of 101 participants were combined with data from the initial proof-of-principle study of 43 patients for a total group of 144 patients.

3. Detection of before surgery or other treatment was also correlated with relapse.

5. While appears to be a good predictor of patients who eventually experienced a clinical relapse, some patients who did not have detected relapsed during this study—lacking does not mean that relapse will not happen.

Because this study was conducted in only one geographical area—the UK—results may or may not be generalizable to other regions and populations.

Tumor-specific mutations were identified in 101 of 170 participants. For 69 participants, the presence or absence of were not tracked; in a clinical setting, one would want to identify mutations for a given patient's tumor.

Although this study indicates that detection is a promising tool for predicting who will need more monitoring or treatment, the numbers of participants represented are small. Additionally, two groups of participants, those from this study and those from original proof-of-principle study, showed different rates of relapse. While combining these groups was planned, this may represent unknown biases in the two groups. A larger trial with a longer follow-up period is needed to assess whether this technique is truly useful in a clinical setting and whether it helps improve outcomes.

Among patients with brain metastases, none were detected by in this study. This suggests that additional tools or more refined detection will be required to monitor for relapse of this type.

While promising, this tool is not yet validated for clinical use. If it becomes validated, the presence of might be useful to determine earlier treatment approaches prior to symptoms of cancer relapse. However, as the study researchers stated, "Our results demonstrate clinical validity for mutation tracking...but do not demonstrate clinical utility. Without evidence that mutation tracking can improve patient

outcome[s], our results should not be recommended yet for routine clinical practice."

A phase II clinical trial for is underway to assess whether use of in a clinical setting will improve patient outcomes.

The following research studies are looking at  and cancer.