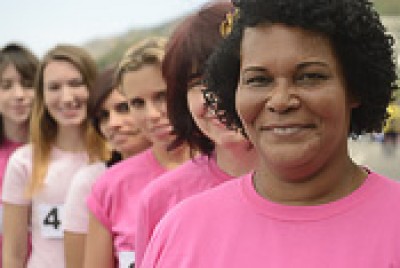 Black women less likely to have genetic testing than white women, but not because they see different doctors

Uncovering the reasons why black women are less likely to receive testing than white women.

Black women have a similar, if not higher chance of carrying a mutation than non-Jewish white women. Yet studies show that fewer black women have testing. Researchers do not understand why this disparity exists.

African American women who have been diagnosed with breast cancer

Black and White non-Jewish/non-Hispanic women have similar chances of carrying a mutation. A recent study suggests that young black women with breast cancer are about twice as likely to carry a mutation compared to non-Hispanic white women. However, many studies have shown that black women do not get tested for as often as white women do. Researchers do not understand why this racial disparity exists.

When researchers of this study explored a possible explanation for this disparity, they noted that racial groups could be segregated unevenly in U.S. cities, suggesting that black women and white women may not be seeing the same healthcare providers. Anne Marie McCarthy and her colleagues at Harvard Medical School and other institutions published research in the Journal of Clinical Oncology to determine if black and white women are seeing different types health care providers and whether or not this accounts for the racial disparity in testing.

Why are black women not receiving testing as often as white women?

The women in this study were between 18-64 years old, from Florida and Pennsylvania, and were diagnosed with localized or invasive breast cancer between 2007-2009. A total of 3,016 women (69% white and 31% black) were surveyed, with a response rate of 61%. Physicians were also surveyed; their response rate was 29% (808 oncologists and 732 surgeons).

While 61% of women who qualified for the study responded to the survey, the characteristics of the respondents, including age, race and year of diagnosis, differed from the women who did not respond. Black women were also less likely than white women to provide data about their physicians. Because this data was based on a survey, some bias could exist in the women’s answers. For example, women who were tested may have been more likely to remember that their physician recommended testing than women who chose not to undergo testing.

This was a population-based study, meaning that not all the women involved met guidelines for genetic testing—the results might be different if study participants included only women who met guidelines for genetic testing. Additionally, researchers could not compare women who received care at academic centers versus non-academic centers. This study only looked at oncologists and surgeons. Other types of doctors could be involved, although in the researchers’ experience, few patients receive breast cancer care from health care providers other than oncologists and surgeons.

Finally, this study included only women from Florida and Pennsylvania. The researchers state that while those populations are large and diverse, it is possible that the patterns in those states are not the same as what may be seen in other areas in the U.S.

This study suggests that although black and white women do not see the same health care providers (some providers see more black women than white and vice versa because of the area in which they practice), that does not explain why black women have testing less often than white women. This study did reaffirm that fewer black women are receiving recommendations to get testing than white women. The researchers suggest this may be because family cancer history information may be less complete among black women. This could stem from either less awareness of cancer diagnoses in other family members, or healthcare providers not asking about family history as often for black women as they do for white women. Even though black women have a similar, if not higher chance of carrying a as a non-Jewish white women, when researchers applied the 2007 risk assessment guidelines to their study population, they found that a lower proportion of black women were classified as “high risk” compared to white women. Using the current criteria, which includes women diagnosed with breast cancer before age 45 (previous guidelines included patients before age 40) and women with before age 60, might increase the number of black women who would meet national guidelines for testing.

Ultimately, more work needs to be done to understand why this racial disparity in testing between black and white women exists. Until then, healthcare providers should be more conscious to fully assess risk for black women, who should question their health care providers if they believe they may be at genetic risk for breast cancer.

Black women less likely to have genetic testing than white women, but not because they see different doctors

Breastcancer.org:  Black women less likely to have genetic testing than white women, but not because they see different doctors
Rating: 4.0 Stars