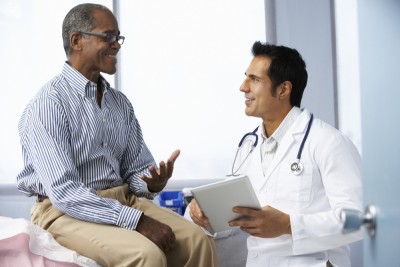 This article is most relevant for People with Lynch syndrome

The IMPACT trial is an international study looking at how well (prostate-specific antigen) screening for cancer works for people with inherited mutations. This report shared early results of screening in people with .

Globally, cancer is a leading cause of death in men, and researchers are beginning to recognize the importance of identifying genetic mutations that increase the risk of this disease.

is caused by an inherited mutation in an , , , or gene. This syndrome increases a person’s risk for colorectal, endometrial, and other cancers. Some research suggests that people with are also at increased risk for cancer and possibly for more aggressive cancer.

However, no studies have looked at whether screening for cancer among people with helps to find the disease in its early stages when it is most treatable. The goals of the IMPACT trial are to better understand the risk of cancer in men with and to determine whether screening with a test can detect early cancer.

The IMPACT trial included 644 men ages 40-69 with an inherited mutation in an , or gene.

Participants were screened for cancer with a blood test when they enrolled in the study. Researchers recommended biopsy for men whose levels were above 3.0 ng/mL. Biopsy samples were then classified based on pathology (visual appearance and presence or absence of cancer cells) as benign (no cancer cells) or high-, intermediate- or low-risk cancers.

Results from participants with were compared to results from age-matched people without an inherited mutation.

It is important to note that this initial screening was done at the beginning of the IMPACT trial. The study is designed to screen participants for five years and follow up on cancer results for 10 years, and will likely detect additional cancer during that time.

The results from this first round of screening in people with show that screening using levels and follow-up biopsies is an effective way to detect cancer, especially those that are high-risk and aggressive and could be life-threatening. This study is ongoing—all participants will be screened annually for at least five years and followed for at least 10 years.

If you have a known mutation in an or gene, you may benefit from testing to screen for cancer. Although people with mutations were not included in the study, their cancer risk is believed to be similar to people with an gene mutation, and they may therefore also benefit from testing. If you have a family history of cancer but you do not know if you have an inherited mutation in a gene that increases your risk of cancer, genetic counseling and testing might help you determine if screening is right for you.

Even though this early research supports using screening for cancer in men with and mutations, national guidelines do not yet include this recommendation. Current guidelines suggest that people with mutations speak with their doctor about the benefits and risks of screening for cancer and consider yearly testing and digital rectal exam beginning at age 40. Not all insurance providers cover the cost of screening.

is caused by an inherited mutation in one of the mismatch repair genes—, , , or —which are associated with increased risk of colorectal, endometrial and ovarian and other cancers. Growing evidence suggests that men with have a slightly increased risk of cancer, but no studies have yet examined whether this group might benefit from screening for the disease.

The Institute of Cancer Research in the UK started the IMPACT trial (Identification of Men with a genetic predisposition to Cancer). This research asks whether screening men with a high genetic risk for cancer is effective and leads to improved survival.

The IMPACT study includes a large group of men with who are screened and followed for cancer. Two other studies in the US are also looking at screening in people with , which will add important information to the IMPACT study.

This is the first study to examine the usefulness of screening for cancer in people with . This report summarizes initial findings from participants at the time of entry to the study.

Researchers of this study wanted to look at the usefulness of the (prostate-specific antigen) test for detecting cancer. They also wanted to determine how often people with are diagnosed with cancer and how aggressive their cancer was at the time of diagnosis.

From 2012 to 2020, 828 men were recruited for the study. Of those, 644 had a mutation in one of the mismatch repair genes (, or ) and 184 did not. To boost the sample size in the group without an inherited mutation, the researchers also included 134 people without mutations who participated in the IMPACT trial. For comparison, each person who tested positive for an inherited mutation was matched to a similarly aged person who did not have that mutation.

Researchers tested participants for blood levels. or men whose levels were above a threshold of 3.0 ng/mL, researchers recommended that they have a biopsy.

Biopsy samples were then classified based on pathology( including Gleason score, T score, N/M and other visual appearance) as benign (no cancer cells) or high-, intermediate- or low-risk cancers. If the biopsy indicated cancer was high risk (having features associated with a likelihood of spreading and being life-threatening), the participants were offered treatment according to current guidelines. If pathologists detected low-risk cancer, participants received an and a second biopsy after three to six months.

Researchers compared how often cancer was diagnosed among participants with a mutation to those without a mutation.

This study is ongoing. Researchers will continue to screen participants yearly for at least five years and follow up on cancer diagnosis for at least 10 years.

In this study, 56 men (6%) had prostate-specific antigen levels above 3.0 ng/L after initial screening, prompting a referral for a biopsy. Of these individuals, 35 consented to have a biopsy.

These findings support previous research indicating that people with , especially those with mutations in an or gene, are at increased risk for cancer and are more likely to have aggressive forms of the disease. More than three-quarters of the tumors among carriers and carriers were clinically significant (treatment would have an effect), supporting the idea that the prostate-specific antigen test is useful for detecting high-risk cancers and would not result in for this group.

The first screening round from the IMPACT trial confirms that is associated with an increased risk of cancer and that some mutations carry more risk than others. This study supports previous studies showing that a mutation in the gene conveys a greater risk of cancer in people with .

screening is the most effective cancer . However, its limitations have been well documented. Some professional groups do not support routine screening due to overdetection and treatment because it leads to too many "" results, meaning suspicious levels even though no cancer is found. However, this study suggests that levels can help identify people with cancer among those with higher risk, including those with an inherited mutation.

Based on the results of the previous IMPACT study in people with mutations, the NCCN updated its guidelines to include annual prostate-specific antigen screening for men with a mutation beginning at age 40. If researchers find similar results in people with , the NCCN guidelines for this population may be updated as well.

Initial results for people with enrolled in the IMPACT trial confirm that individuals with an inherited mutation in or have an increased risk for cancer. These findings also support the use of prostate-specific antigen testing in people with to detect , aggressive disease.

Share your thoughts on this XRAY review by taking our brief survey.
posted 11/10/22

The NCCN suggests that individuals with inherited mutations linked to talk with their doctor about the benefits and risks of screening beginning at age 40. Those people who elect to have screening should consider having yearly screenings rather than every other year.

The following are studies looking at ways to screen for cancer in people at high risk: