In December 2020, the FDA approved Orgovyx to treat advanced prostate cancer. The findings were based on the HERO clinical trial of more than 900 men. Data from this trial showed the new therapy was safer than standard androgen deprivation treatment for men with advanced prostate cancer and risk of cardiovascular disease. (2/18/21) 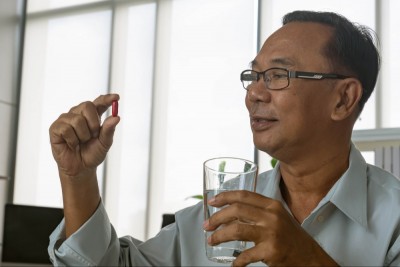 This article is most relevant for Men with advanced prostate cancer

This study is about the recent FDA approval of the oral therapy, Orgovyx (relugolix), to treat advanced prostate cancer.

Androgen deprivation therapy (ADT) is a treatment option for advanced prostate cancer (cancer that has spread beyond the prostate). ADT uses drugs to stop the body from making or using testosterone—a hormone that fuels growth of prostate cancer cells.

For decades, this type of hormone therapy has been administered to patients by injection or implants placed under the skin. The recent FDA-approved drug Orgovyx is a pill taken by mouth. This new option helps some patients eliminate clinical visits that are required to inject or implant prior to ADT treatment.

Approval of Orgovyx was based on data from the international HERO clinical trial, which included 930 men aged 18 or older who had advanced prostate cancer. The men were enrolled in the study from one of 155 medical centers in four continents, including the North America.

During the study, the men were divided into the following treatment groups:

The goal of the treatment was to achieve and sustain a “castrate level” of testosterone (the level achieved by surgical removal of the testes) between day 29 and week 48.

Side effects
The most common side effects associated with Orgovyx treatment included:

The FDA warns that ADTs, such as Orgovyx, may affect the heart’s electrical properties or cause an imbalance of electrolyte minerals in your body. Regular monitoring of heart functioning during ADT treatment may be recommended by your doctor. In addition, Orgovyx may cause fetal harm or miscarriage.  The FDA advises that males with female partners who may become pregnant use effective contraception during treatment and for two weeks after the last dose of Orgovyx.

If you have a diagnosis of advanced prostate cancer and your doctor recommends androgen deprivation therapy, please discuss all options for therapy management. If you are likely to take a daily pill for your prostate cancer, Orgovyx may be an option for you. If you feel as though you are not likely to remember to take a pill every day, standard treatments such as injection by healthcare providers or therapy implants may be a better fit for you.

Hormone therapies, such as androgen deprivation therapy (ADT) may be used to reduce levels of male hormones (androgens) in the body or to stop them from fueling prostate cancer cells.

According to the American Cancer Society, hormone therapy may be used:

The National Comprehensive Cancer Network (NCCN) consists of experts in cancer. The NCCN has guidelines related to monitoring and addressing treatment side effects with ADT. They include:

The following are studies looking at androgen deprivation therapy in people with prostate cancer:

A number of other clinical trials for patients with early-stage breast cancer can be found here.