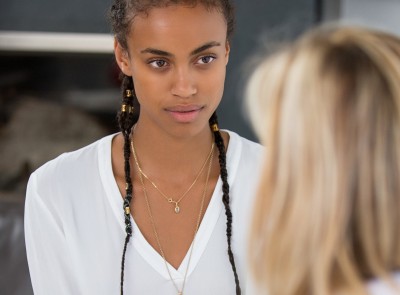 How African American and white women with a higher risk of breast cancer navigate their risk-management options.

1) Understanding how high-risk women make decisions about their health care and how that impacts their risk-management choices.

2) Whether African American women and white women differ in their access to information and interactions that support their health care decisions.

If you are at high risk for breast cancer, consider talking to a specialist (genetic counselor, breast oncologist, nurse navigator) who can provide information specific to your situation.  A range of options are available, including enhanced surveillance, risk-reducing surgeries, and .  Ask your health care providers what preventive options are available to you and which might best fit your circumstances.

Kurian A, and mutations across race and ethnicity: Distribution and clinical implications. Current Opinion in Obstetrics and Gynecology. 2010. 22:72-78.

African American women who are at high risk for breast cancer

Women are defined as having high risk of breast cancer because of age, family history and/or a known genetic mutation. Some reports indicate that African American and white women have similar rates of mutations in breast cancer genes (John, et al. 2007 and Kurian 2010) while others indicate that there may be slightly more mutations among African American women. These rates do not account for all of the differences in mortality.

Women at higher risk for breast cancer have several possible preventive options. From least aggressive to most aggressive, these are:

While it is not a preventive option, genetic testing can greatly inform preventive choices. Women who have mutations in breast cancer-related genes are at greater risk of breast cancer, as well as ovarian and other cancers.

Choosing or rejecting these preventive options requires that healthy women are aware of them. Women need sufficient information about the pros and cons of each option and understand their personal risk to make informed decisions. Confidence in that information, interactions with health care providers, social support and financial capacity all factor into these decisions (Padamsee, et al, 2017).  Women must first have a general base of information about breast cancer risk, and perceive it and prevention as important issues if they are to be motivated to pursue more specific information.

Racial differences in uptake and knowledge of risk-reducing options have been observed. Multiple studies have shown that African American women are less likely to participate in genetic counseling and testing than white women; they are also less likely to know about risk factors for breast cancer.

1) how high-risk African American women make decisions about their health care and how that impacts their risk management choices.

2) whether African American women differ from white women in their access to information and interactions that support their health care decisions.

Researchers interviewed participants about their experiences with cancer risk, risk-management behavior, and their decision-making process. Interviews were transcribed and analyzed for theme by at least two analysts. Participants were asked questions in reverse chronological order: initially about their risk management decisions and then about prior issues or factors that contributed to their decisions.

Note: Researchers used data collection methods that started by asking women questions in a reverse chronological order: initially about their risk management decisions, then about prior specific issues or factors that contributed to their decisions, and then about general perceptions about breast cancer and risk. For clarity, issues are presented here in the chronological order experienced by the participants.

Gathering general information is necessary step in understanding risk and risk-management choices. A general understanding of cancer risk and prevention needs to occur before an individual can fully appreciate her specific risk information or preventive options.

Participants’ comments highlight the lack of referrals to a specialist:

Elise (white, 22)
“ [The genetic counsellor] went through my whole family history with me…and then she explained to me how the gene works and my chances of inheriting it…And then she told me that if I have inherited it the chances of me developing breast cancer and its link to ovarian cancer…about when I would get tested for the gene and if I should get tested and how I felt about it…[We discussed] my concerns about getting tested…about how knowing that information or not knowing could influence the rest of my life…The [breast oncologist then] talked to me a little bit more about the chances of developing [breast cancer]...I have much more peace now that I’m on [the facility’s] radar as a patient…and they see me every year.”

Tanya (African American, 53)
"I’ve had the same family doctor since I was 19, love him—and he said, ‘You know, looking at the family history, let’s just start screening everything here [breast, cervical, and ovarian cancer screening]’ And once a year, we just screen. [Because] my doctor knows, he knows I’m afraid of cancer.”

Jojo (African American, 25) asked her OB/GYN if she should be tested for mutations and was told, “The only people who ever come back positive for that test are Jewish ladies.” This is inaccurate. mutations are found among all racial groups.

Barberette (White, 58) "intensely feared” ovarian cancer and asked repeatedly to have her ovaries removed, even when she was mostly through menopause and about to go under anesthesia for her hysterectomy, but her OB/GYN steadfastly refused to take out ‘healthy ovaries.’”

The number of different information sources correlated with participants knowledge about risk-reducing options. Women who were aware of all or most options obtained that information from health care providers or friends and family. Those who were aware of fewer options used online resources, magazines and their primary care physicians. Three African American participants were unaware of their key prevention choices, even though their primary care physicians were their main source of information.

When asked whether it is possible to alter one’s cancer risk:

Monica (African American, 32)
"Cancer in general has always been a worry, a concern, of mine…so many people are being diagnosed with every type of cancer at this point…cancer in general is just common."

Specific information gathering is the second step in the decision-making process.

"It’s something I think I might do. I guess I would have to have a conversation…what does [the genetic result] mean and does it need to be done right away or can I try and pop out one kid first?…The alternatives [cancer] seem a lot worse and much scarier and you can always adopt kids…."

Information access is more complex than previously understood. Disparities exist in information access for African American women at every step of the information-gathering process. This is a prime area for intervention to decrease barriers to decision making and subsequent care.

The concept of generalized versus specific risk perception from this study is a new framework for research. Researchers noted that information access and provider access were intertwined and may systematically disadvantage African American women.

African American women in this study reported a need to prioritize other health problems. The authors state:

"Coping with one or more present health conditions reasonably pushes thinking about cancer risk down a woman’s personal priority list. Time, attention, and money are finite, and the need to invest these resources in current or chronic health problems reduces their availability for addressing possible future threats to health. The fact that our African American participants faced more current health problems and devoted fewer resources to risk-management decision making is consistent with racial disparities found in all major illness categories in the USA.”

African American Women Are at a Disadvantage in Preventing Breast Cancer