A small research study tested the usefulness of the immunotherapy drug dostarlimab for treating locally advanced rectal cancer with a biomarker known as “dMMR” (DNA mismatch repair deficient). None of the participants had evidence of cancer six months later; some remained cancer free for up to 25 months). Many participants had Lynch syndrome. The remarkable response to this treatment may allow people with this particular subtype of rectal cancer to avoid potentially life-changing rectal surgery. (Posted 11/14/22) 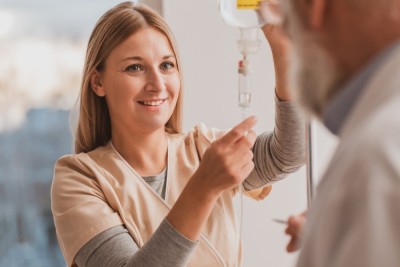 This article is most relevant for People with rectal cancer with high mutational burden or mismatch repair problems including people with Lynch syndrome.

A Cancer trial's unexpected result: Remission in every patient

This study tests the usefulness of an drug (the anti-PDL1 checkpoint inhibitor dostarlimab) to treat a type of 2-3 rectal cancer before using any other treatments or surgery ( treatment). The goal was to control cancer and reduce the need for surgery.

People with locally advanced rectal cancer ( 2 or 3) typically have chemotherapy and radiation treatment followed by surgery. These treatments can have serious side effects and rectal surgery can be life-altering. It often requires a colostomy, in which a person's colon is permanently connected to an artificial opening and empties bowel movements into a bag on the body. If a treatment was found that allowed people to avoid surgery, it would be a vast improvement in their quality of life.

One promising approach is treatment with a type of drug known as immune checkpoint inhibitors. These drugs have been shown to be effective for treating cancers that are ( mismatch repair-deficient) or (microsatellite instability-high). Less than 10 percent of rectal cancers are or , but MSI-High/dMMR cancers are common in people with .

In this study, researchers tested whether dostarlimab would benefit patients with rectal cancer that was before any other traditional therapy was offered.

This study enrolled 16 people who had known rectal cancer that was 2 or 3. Among participants, 94 percent had cancer that spread to their ( 3). Participants received an injection of dostarlimab every three weeks for six months (nine total injections). Because this is an early phase of research, no comparison group of people was included, and all participants received dostarlimab. This treatment was given prior to any other treatment.  Patients were supposed to transition from dostarlimab to chemotherapy, radiation and surgery if they did not achieve a complete clinical response.

Only a minority of rectal cancers are or . Testing for these biomarkers are commonly available at the time of diagnosis of rectal cancer through tests on the biopsy obtained. Understanding whether your rectal cancer is or may help you and your doctor decide the best treatment for your situation.

If you have newly diagnosed, 2 or 3 rectal cancer that is or , you may want to ask your doctor if you are eligible to receive dostarlimab or a similar treatment, potentially through a clinical trial since these drugs are not yet approved for early rectal cancer. Because many people with dMMR/MSI-high cancers have , genetic counseling and testing are also warranted.

Most commonly, patients with locally advanced rectal cancer ( 2 or 3) have chemotherapy and radiation treatment followed by surgery. Rectal surgery is often life-altering particularly when it requires a colostomy. A colostomy is created after some types of rectal cancer surgery where a patient's colon permanently empties bowel movements into a colostomy bag. If a treatment was found that allowed patients to avoid surgery, it would be a vast improvement in a patient's quality of life.

Some patients who are treated with drugs for rectal cancer prior to surgery ( treatment) have no evidence of cancer (a complete pathological response). Because there is no cancer remaining they do not need surgery. Up to 25 percent of patients treated with fluoropyrimidine and oxaliplatin had a complete response. However, this treatment was also linked to a high rate of complications and severe side effects. Researchers were looking for alternative treatments with better outcomes.

One promising treatment may be drugs that affect cancers that are mismatch repair-deficient (MMR-deficient). Drugs called PD-1 inhibitors, a type of checkpoint inhibitor, have been a useful treatment for MMR-deficient cancer in other organs.

In this study, the researchers were looking at the PD-1 inhibitor dostarlimab (brand name Jemperli). Because dostarlimab has been beneficial in treating MMR-deficient advanced colorectal cancers, researchers thought that it may also be useful as an early rectal cancer treatment. They wanted to know whether dostarlimab would slow or stop the progression of MMR-deficient, locally advanced rectal cancer. In this study, they tested whether dostarlimab improved outcomes for people when given as a drug, prior to any other treatments, including chemotherapy, radiation and surgery.

Researchers wanted to know whether dostarlimab given prior to any other treatments would improve outcomes for people with 2 or 3 MMR-deficient rectal cancer.

A total of 16 participants with 2 or 3 rectal cancer were enrolled. This study reports some information for all 16 individuals but focuses on 12 who had completed treatment and were observed for another six months or more.

Participants’ cancer was verified by imaging tumors with and CT and by digital rectal exam and endoscopy. Tumors were confirmed to be MMR-deficient based on testing of the biopsy obtained that confirmed the initial diagnosis. Participants were excluded if they had prior , chemotherapy or radiation for rectal cancer, currently had an infectious or autoimmune disease or were on an immunosuppressant within the prior week.

The average age of participants was 54 years; 62 percent were women. No participants have withdrawn from the study. The 16 participants self-reported their race and ethnicity: 11 were white (69 percent), three were Asian (19 percent) and two were Black (12 percent); one participant was Hispanic (6 percent). Fifteen participants had 3 cancer, while one individual had 2 cancer; 94 percent had node-positive cancer. The most common symptoms of patients at enrollment were rectal bleeding (88 percent), constipation (31 percent) and abdominal pain (25 percent). Analysis of tumor biopsies prior to treatment verified that all participants' cancers were MMR-deficient. Although no participant had a known family history of , eight of 14 participants (57 percent) had inherited mutations in a gene (one in , four in , two in and one in ). Two participants had not yet had genetic testing at the time of this report. All six participants without an inherited mutation were missing one or more proteins in their tumors.

This study was published on June 23, 2022, in The New England Journal of Medicine. It reported results from 12 participants with locally advanced 2 or 3 rectal cancer who had already completed six months of treatment with dostarlimab and had 6 months or more of follow-up observation.

This was a single arm, phase 2 study that followed the cancer outcomes of participants with 2 or 3 MMR-deficient rectal cancer. Participants received 500 milligrams of dostarlimab every three weeks for six months (nine total injections). Because this is an early phase 2 study, no comparison group (people who did not get the drug) was included.

The goals of this study were to determine:

1.  how many participants had either:

2.  the overall response (OR) after dostarlimab treatment (with or without chemotherapy and radiation).

No participant’s cancer progressed or recurred after dostarlimab treatment at the time of this study report.

All participants avoided rectal surgery or other chemotherapy or radiation treatments.

No severe adverse events were reported.

treatment is used for other . However, the response to treatment for rectal cancer reported in this study is much better than has been seen previously. These researchers pointed out that they treated for six months—longer than many other treatments. Most of the participants in this study experienced some shrinkage of their cancer after three months of dostarlimab treatment.

A prior study reported a 55 percent response of mismatch repair-deficient colorectal cancers to toripalimab, a different PD-1 inhibitor that was given alone or with the drug celecoxib. Of note, these participants had other prior treatments. It is not clear if the lower response in that study was due to differences in the drugs, location of the cancer in the GI tract or a prior treatment or some combination of them. In general, only 11 percent of mismatch repair colorectal cancers respond completely to treatment. The differences that allowed 100 percent of the rectal cancers in this study to respond are unknown.

The checkpoint inhibitor dostarlimab is a promising treatment for locally advanced, mismatch repair-deficient rectal cancer. This treatment may allow patients with this type of cancer to avoid life-altering rectal surgery while improving outcomes and quality of life. More research and follow-up is needed to determine if this very small study holds up for more patients, but it appears very promising.

Share your thoughts on this XRAY review by taking our brief survey.
posted 11/14/22

The following organizations offer peer support services for people with or at high risk for colorectal cancer:

A Cancer trial's unexpected result: Remission in every patient

Small Rectal Cancer Study Has Remission in Every Patient

Unheard of: Immunotherapy drug that in trial cured this cancer every time

Independent: All cancer patients in drug trial appear to be cured for ‘first time in history’
Rating:  2.5 Stars