Tennis star Chris Evert shared her story about a change in her sister's genetic test results that led Ms. Evert to have genetic testing and her decision to have her ovaries removed to lower her cancer risk. Ovarian cancer was found at the time of Ms. Evert’s surgery, but fortunately, it was caught early. Her story highlights the importance of genetic counseling, testing and post-testing follow-up with experts. (Posted 2/8/22) 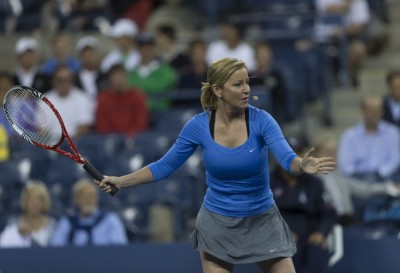 What is this article about?

Chris Evert's ovarian cancer was found when she had risk-reducing surgery because of an inherited mutation that increases the risk for ovarian cancer. The majority of ovarian cancer is advanced by the time it is diagnosed; about 75 percent of cases are diagnosed at 3 or 4. In contrast, during her surgery, Ms. Evert was found to have 1 cancer, which is frequently curable. Her story highlights the importance of genetic counseling and testing and the importance of following up with a genetics expert to understand test results and preventive options.

Most genetic testing for risk provides clear answers about whether an individual has a harmful mutation that is linked to cancer. Clear results include gene changes (mutations) that are known to be either benign (harmless) or pathogenic (harmful). Sometimes, however, it’s unclear whether the identified change is harmless or harmful. This type of test result is known as a (). Variants of uncertain significant are just that - uncertain. This term means that experts cannot be sure  whether the mutation is harmless or harmful.

Knowing whether you have a harmful mutation allows you to better understand your risk for cancer and take action to manage these risks. If you test positive for a mutation, expert guidelines recommend screening and preventive options. Depending on the mutation, risk-management options may include preventive surgery to lower your risk or increased surveillance to identify cancer at the earliest possible when treatment is more likely to be successful.

Your genetic test results can also provide your relatives with information about their own cancer risk. If you test positive for a harmful mutation that is linked to an increased risk for cancer, your relatives can be tested for the same mutation. On the other hand, results can be frustrating because they don’t provide you or your relatives with much information about your cancer risk. Over time, as more people have genetic testing and the science improves, researchers will be able to categorize more results that are now into harmful or harmless. This process is referred to as “reclassifying variants.”

Following up on a test result of a

If you’ve received a result from genetic testing, it is important to stay in touch with your genetic counselor to be aware of a reclassification. Chris Evert experienced this firsthand. Her sister, Jeanne Evert Dubin, was diagnosed with ovarian cancer in her late 50s. After her diagnosis, she had genetic testing, which showed that she had a in the gene. Due to the uncertainty associated with results, it is not recommended that family member be tested for .

Several years later, Ms. Evert was informed that her sister's had been reclassified as a pathogenic (harmful) mutation. Due to the reclassification, Ms. Evert then had genetic testing and found that she and her sister had inherited the same harmful mutation.

Preventive options for people with an inherited mutation

Knowing that you are at increased risk of cancer allows you to decide whether to increase surveillance to identify a future cancer at the earliest possible or to pursue preventive surgical options to lower your risk of developing cancer.

A harmful mutation increases the risk for several cancers, including breast, ovarian and pancreatic cancer. Given her sister's ovarian cancer diagnosis, Chris Evert chose to reduce her cancer by having her uterus and ovaries removed.

"We thought we were being proactive...Since Jeanne had ovarian cancer, that was the priority. A breast decision is down the road."

When people at increased risk have risk-reducing surgeries, the removed tissue is examined for cancer. Sometimes unexpected cancers are found in this way. To reduce ovarian cancer risk, it is important to examine the tissue that is removed from the ovaries and nearby . While finding no cancer is ideal, finding ovarian cancer early has been linked to better survival. In Ms. Evert's case, her post-op pathology showed that she had 1C ovarian cancer.

When cancer is found at an early , like Chris Evert's diagnosis, treatment is often more effective, and outcomes are better.

"Seventy to eighty percent of ovarian cancer is diagnosed at 3 or 4."

As Chris Evert points out in her article, she had no symptoms. This is common with ovarian cancer, especially at early stages. Until cancer spreads to the abdomen and affects other organs, there often is nothing to notice. By the time someone has symptoms, ovarian cancer is often advanced or and much harder to treat successfully.

Some cancers signal their presence in ways that can be monitored. Rising levels in the blood, for example, may signal the presence of cancer, while a lump in the breast may indicate breast cancer. But currently, no validated tools can detect ovarian cancer. The one measure that is sometimes used, blood level testing, is unreliable. Chris Evert’s levels were normal, even though she had ovarian cancer. Similarly, and failed to detect her cancer, which is commonly the case with early ovarian or cancers. For this reason, screening with and is not seen as a substitute for risk reduction surgery.

Many of the symptoms that have been linked to ovarian cancer are common conditions of other health situations, including fatigue, bloating, abdominal pain, and a feeling of having to urinate urgently or more frequently than normal. When these commonly occurring symptoms are caused by ovarian cancer, they tend to be more persistent (rather than intermittent) and are a noticeable change in a person's normal health. It is important to discuss these signs with your doctor to determine if they warrant a follow-up.

"Be your own advocate. Know your family's history. Have total awareness of your body, follow your gut and be aware of changes. Don't try to be a crusader and think this will pass."

She also points out that:

"The perception of gynecologic cancers (ovarian, cervical, , uterine) as a women's disease or cancer also needs to change. Mutations to the gene can lead to an increased risk of cancer for people of all gender identities."

Transgender individuals have cancer risks that are associated with the organs present in their bodies.

Men with mutations are also at risk of cancer, including breast cancer (Yes, men have breast tissue too!) and an increased risk of cancer.

And people with mutations of any gender have an increased risk of pancreatic cancer.

A common misconception is that the genes linked to breast and ovarian cancer are always from your mother's side of the family. However, a person can inherit a mutation from either biological parent. Knowing the medical history of both sides of your family is important information to convey to your healthcare provider so they have a complete understanding of your risks.

Research increasingly shows that many inherited mutations can elevate a person’s risk for multiple types of cancer. If your family has a history of cancer on either side, consider consulting a genetic counselor about whether genetic testing is appropriate for you.

Some families that have a significant history of cancer have no known inherited mutations. The frequency of cancer in these families suggests an increased cancer risk that can be inherited but that the gene or genes responsible have yet to be identified. If you have a strong family history of cancer, you may want to talk to a genetic counselor or another healthcare provider about whether increased surveillance or risk-reducing options are warranted for your situation—even if you do not have a known inherited mutation.

The following are studies looking at ovarian cancer screening or prevention.  ​​​​​

Additional clinical trials for ovarian cancer screening and prevention may be found here.

The following organizations offer peer support services for people with, or at high risk for ovarian cancer:

The following organizations have resource on variants of uncertain significance ().