THIS INFORMATION HAS BEEN UPDATED on 04/27/20:  Based on the results from the study reviewed in this XRAY, the U.S. Food and Drug Administration (FDA) has approved sacituzumab govitecan-hizy (Trodelvy), as a treatment for people with metastatic triple-negative breast cancer who have received at least two prior therapies for metastatic disease.

We report results of an early-stage clinical trial of a new class of drugs for metastatic triple-negative breast cancer (TNBC). IMMU-132 is a combination of two different molecules: an antibody that targets certain types of cancer and delivers a chemotherapy drug that can kill cancer cells. This study looks at whether IMMU-132 is safe and effective for treating metastatic TNBC. (4/16/19) 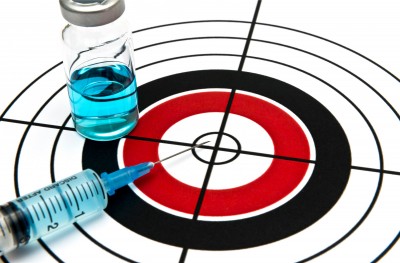 This article is most relevant for People with metastatic, triple-negative breast cancer

THIS INFORMATION HAS BEEN UPDATED on 04/27/20:  Based on the results from the study reviewed in this XRAY, the U.S. Food and Drug Administration () has approved sacituzumab govitecan-hizy (Trodelvy), as a treatment for people with   who have received at least two prior therapies for  disease.  Please refer to our most updated review on this agent for additional information.

If you have triple-negative breast cancer (mTNBC), be aware that new treatment therapies are being developed if other single-line therapies fail. The smart drug tested in this study is not yet approved by the . However, the ASCENT trial, an ongoing Phase III clinical trial that is currently enrolling participants, is further testing the efficacy of this drug. Additionally, Tecentriq (atezolizumab) plus nab-paclitaxel was recently approved the as a first-line treatment for women with triple-negative breast cancer whose tumors are positive for the protein. In contrast, the smart drug IMMU-132 can be used to treat women regardless of the status of her tumor (positive or negative).

(), accounts for 15% of all breast cancers. It is an aggressive cancer which may be difficult to treat. is more common in younger women and black women.

While headway has been made treating other types of breast cancer, treatment and survival rates have remained largely unchanged in the last 20 years. Single-agent chemotherapy is the current standard of care, although only 10-15% of patients show clinical response and progress after 2-3 months. This may change given the recent IMpassion 130 clinical study of atezolizumab (Tecentriq) and nab-paclitaxel. This trial reported 7.4 months of progression-free survival in previously untreated TNBC patients. This led to recent approval of atezolizumab plus nab-paclitaxel for PD-L1-positive mTNBC. ( is a molecule on the surface of some tumor but not all.)

Aditya Bardia and colleagues report results of an early clinical trial to test the safety and effectiveness of a new class of therapy for treatment of triple-negative breast cancer in the New England Journal of Medicine in February 2019. This uses IMMU-132 (also called sacituzumab govitecan-hziy), a so-called "smart" drug. IMMU-132 consists of a two-part molecule that fuses a targeting molecule (the hRS7 antibody) to a chemotherapy drug (the cancer-killing drug SN-38). The antibody portion of the smart drug binds to the surface of tumor cells and delivers the chemotherapy to the tumor cells, which are then destroyed. SN-38 then spreads to neighboring tumor cells, killing them as well.

In contrast to Tecentriq, the smart drug IMMU-132 does not depend on the status of the tumor (both PD-LI-positive or -negative tumors are a potential target).

Based on promising preliminary results with 69 patients, the designated IMMU-132 as a breakthrough therapy, allowing enrollment for patients who have had two or more prior therapies for mTNBC. This study looks at safety and effectiveness in all mTNBC patients who were treated with IMMU-132.

Whether the new drug IMMU-132 (sacituzumab govitecan-hziy) is safe and effective for treating triple-negative breast cancer.

Participants were 108 individuals with confirmed triple-negative breast cancer. Their median age was 55 years; 82 (76%) were white, 8 (7.4%) were black, 3 (2.8%) were Asian and 4 (3.7%) were Native American, Hispanic, Dominican or of mixed race; 11 (10%) declined to state their race. All of the women had cancer that was measurable by CT or scans. All of their cancers had progressed after two prior lines of treatment for disease prior to this study; they were no longer benefiting from their prior treatment. (Patients had a median of three prior therapies, ranging from 2-10 therapies.)

This group of 108 patients was a subset of a larger study of 420 patients with a variety of epithelial cancers, including colon, liver, stomach, ovarian, lung, and pancreatic cancers. Patients with brain metastases were excluded unless they were disease free and symptom free for 3 months and were not being treated with high-dose steroids.

The objective of this phase 1/2 single treatment trial was to determine the effectiveness, type and rate of adverse events that occurred with treatment with IMMU-132. Patients were treated with IMMU-132 on day 1 and on day 8 every 3 weeks until their cancer either progressed (grew) or an unacceptable occurred. Dose reductions may have been tried for patients who experienced adverse events.

The measured points were:

Adverse events were comparable or lower to similar trials.

The adverse events observed among patients with were similar to those seen for all patients with any cancer treated with this drug. The most severe events were impacts on red or white blood cells (anemia and neutropenia). Other common, less severe impacts were diarrhea and nausea. The rates of these adverse events were similar or lower than other treatments for TNBC (e.g., in the EMBRACE studies of pretreated mTNBC patients, 13% of patients treated with eribulin and 15% of patients treated with a physician’s choice of treatment discontinued treatment, compared to 3% in this study).

Objective response rate (ORR) or whether the tumor(s) shrank in response to treatment was one of the secondary endpoints of this trial.

This study observed clinical benefit, defined as complete or partial response or stable response (less than 20% change in tumor size) in 45.4% of participants.

Length of time before cancer progressed

The number of participating African Americans was low; numbers of Asian and Hispanic patients were even lower. The small number of participants of varying races limits researchers’ ability to determine if there are any differences in response rates. African American women are nearly twice as likely to be diagnosed with as white women. Since African American and Hispanic women account for 10% and 18% of those with mTNBC respectively, this is a gap in information that needs to be addressed. Hopefully, as phase 3 trials enroll patients, more participants of varied racial background will participate.

Direct comparisons with other treatments for mTNBC have not yet been done. In particular, a comparison of atezolizumab plus nab-pacitaxel versus IMMU-132 would help clarify which treatment approach would work best for patients with PD-L1-positive tumors. For those with PD-L1-negative tumors, IMMU-132 may prove better than current standard of care.

This is a promising approach to treating mTNBC, particularly because there are currently few ways to treat this aggressive cancer. However, more data is needed to confirm the impact of this smart drug and to determine which, if any, of several newer treatments is best for different types of patients. The rejected a request by Immunomedic (the manufacturer of IMMU-132) for accelerated approval due to manufacturing (not clinical) concerns. An ongoing Phase III trial of IMMU-132 may provide additional data about its efficacy.