The PARP inhibitor talazoparib (Talzenna) has been useful for treatment of advanced or metastatic breast cancer for patients with BRCA mutations. A preliminary study showed that the majority of patients who took talazoparib alone before surgery for early-stage breast cancer had effective treatment and manageable side effects. Expanded clinical trials are in progress to verify this result. (10/4/19) 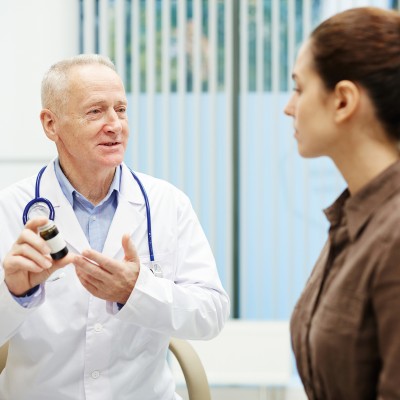 Whether the Talzenna () is effective for treating patients with cancer that can be surgically removed in patients with inherited  mutations.

This pilot study included 20 patients. The goal was to test the effectiveness and side effects of () alone when taken for 6 months before surgery in patients with I, II or III breast cancer who had a hereditary mutation.

The majority of patients treated with () before surgery had a pathologic complete response [pCR]), meaning that they had no detectable cancer in their breast or at the time of surgery. The study measured residual cancer burden (RCB), the amount of tumor that remains after treatment.

The side effects observed were tolerable tor most patients.

Two PARP inhibitors are approved in the U.S. to treat advanced breast and several others for ovarian cancer. As of now, no PARP inhibitors have been approved for breast cancer. Ongoing clinical trials are looking at the effectiveness and safety of these drugs for people in this population.

More research on () as a treatment for breast cancer is needed to determine if this initial study result can be confirmed.

If you have breast cancer and have a mutation, you might consider discussing treatment with your health care provider.

PARP inhibitors block the function of a repair enzyme in cells. Tumor cells of people with inherited mutations or tumor cell that have acquired a mutation can be specifically targeted and destroyed by PARP inhibitors.

Two PARP inhibitors, olaparib (Lynparza) and () are approved for treatment of advanced or breast cancers for people with an inherited mutation in one of the genes. The OlympiAD trial of olaparib (Lynparza) and the EMBRACA trial of () showed that treatment with these drugs lengthened the time until tumors grew and improved quality of life among breast cancer patients compared to patients treated with chemotherapy.

Since PARP inhibitors are useful for treating breast cancer patients, can they be used to treat earlier-stage breast cancer? Typically, patients with BRCA-positive, tumors have been treated with chemotherapy before or at the time of surgery, which improved outcomes, specifically by increasing the frequency of pathologically complete recovery (pCR) or the frequency of clinically undetectable cancer.

The I-SPY trial found improved outcomes when the velociparib was given with traditional chemotherapy (carboplatin plus paclitaxel) compared to another chemotherapy combination. Other combination trials with PARP inhibitors for breast cancer have not shown any improved outcomes; however, in these studies, most participants did not have mutations. If PARP inhibitors work predominantly in people with mutations this may have confused the results.

Could PARP inhibitors alone give a similar or better result than chemotherapy drugs for people with mutations?  Researchers at MD Anderson Cancer Center at the University of Texas tested whether tumors of patients with I to III breast cancer responded to the talazoparib () when it was given before other chemotherapy. Patients with mutations and I to III breast cancer who were treated with for 2 months and then chemotherapy prior to surgery showed a decrease in tumor size.

This result led to this pilot study that looked at whether by itself at the time of surgery improved patient outcomes with tolerable side effects.

Participants were 20 patients with a verified inherited or mutation, I to III breast cancer, and a primary tumor of 1 cm or larger that was imaged by and . Participants were enrolled from August 2016 to September 2017, with a median age of 38 years (range: 23 to 58 years). Although both men and women were eligible, all 20 participants were women. Among the participants:

Patients with HER2+ tumors were excluded. Patients were also excluded if they had previous surgery, radiation, or for breast cancer. Patients with prior ductal carcinoma in situ or who had treatment for a previous non-breast cancer at least 5 years prior were still eligible.

This pilot study of 20 patients intended to collect preliminary data to demonstrate the usefulness of a larger trial.

Twenty patients underwent a pretreatment biopsy, then took 1 mg of once a day for 6 months, had surgery to remove their tumors and then had postsurgery treatment of their physician’s choice. The study measured residual cancer burden (RCB) or the amount of tumor that remains after treatment and tracked side effects among participants. Patients who had at least 4 months of treatment and surgery within 6 weeks of their last dose were evaluated. One patient received 5 months of therapy, but had an enlarged lymph node and chose to have systemic chemotherapy before surgery. Her information was included for but not for the primary end point of pathologic response.

The majority of patients treated with () before surgery had a pathologic complete response [pCR]) or no invasive disease in breast and lymph at the time they were evaluated. The study measured residual cancer burden (RCB), the amount of tumor that remains after treatment. A RBC-0 is the same as pathologic complete response. Residual cancer burden of 1 (RCB-1) or more have increasing amounts of tumor remaining.

The toxic side effect observed were tolerable tor most patients.

The most common severe side effects were anemia and nausea:

This trial had many limitations:

In this pilot study, () alone appears to be a promising treatment for patients with mutations who develop breast cancer. An expanded clinical trial with a larger number of participants is needed to determine if this treatment approach is viable.

The National Comprehensive Cancer Network has guidelines on treating breast cancer in people with an inherited or mutation, with early-onset breast cancer. For people who are at high risk for recurrence, NCCN recommens considering a year of with olaparib after chemotherapy is completed.

The following are studies enrolling people with early breast cancer.

A number of other clinical trials for patients with breast cancer can be found here.