Skip to main content
Get notified of page updates
Sign Up for FORCE Newsletters
FORCE advocates for families facing hereditary cancer in areas such as access to care, research funding, insurance and privacy.
I am here to learn about:
Close

In 2009, the American Civil Liberties Union (ACLU) filed a lawsuit challenging Myriad Genetics' patents on the BRCA genes. On April 15, 2013 the U.S. Supreme Court heard oral arguments, and ultimately ruled unanimously that the patents on the BRCA1 and BRCA2 genes were invalid. This landmark ruling represented the culmination of the legal tug-of-war between Myriad and the plaintiffs, including the ACLU as well as individual, advocacy, and health care professional groups.

FORCE strongly supported the stance that exclusive gene patents had negative effects on the scientific, medical and patient communities, and filed an Amicus (Friend of the Court) brief on behalf of the plaintiffs. In addition, a FORCE representative testified before the U.S. Patent and Trademark Office and served as an expert witness on how the exclusive BRCA gene patents influenced research and access to care. 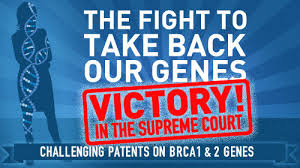 The abolishment of gene patents has fostered competition and substantial growth in the genetic and genomic testing marketplace. Costs for genetic testing have plunged while the growth of multigene panel tests has accelerated quickly enabling the identification of individuals who carry not only BRCA mutations, but also many "new" genetic mutations which cause increased risk of breast, ovarian, and related cancers. In addition to allowing more high-risk individuals to be proactive with their health, the new landscape is fostering a more personalized approach to cancer treatment with the development of therapies that target tumors based on their unique biology.

12/6/2022 - Joined a broad range of stakeholders to urge Appropriations leaders to pass the FY23 Omnibus spending bill, and to include boosted funding for the National Institutes of Health (NIH) and our nation’s other research agencies.

11/28/2022 - Asked congressional leadership to include the Access to Genetic Counselor Services Act (H.R.2144/S.1450) in a year-end legislative package so that Medicare beneficiaries can better access genetic counseling services.