Reflections on the March for Science

Scientists rarely, if ever, come together across disciplines to achieve a common goal. That is unfortunate, as I believe most scientists share a common passion, and deep down, we know we can accomplish so much more collaboratively. I think that most would agree that what motivates us to conduct scientific research is to better understand how the world works so that we can better the lives of all.

All over the world, scientists joined together with others who are passionate about science. While most scientists usually do not relish leaving the comfort of our “ivory towers,” and those who are ardent advocates of science would rather spend a spring Saturday doing anything but taking to the street, those who marched realized it is time to raise our collective voices in support of science. Individuals’ reasons for participating in Saturday’s March for Science were varied but all recognized how science impacts their lives.

What do Seattle, Chicago and a small town in northeast Ohio have in common?

For four women, two living in Seattle, one in Chicago, and one in the small city of Canton, Ohio, the March for Science began by wearing stocking caps knit by my mother, a two-time breast cancer survivor. Woven into the caps are DNA helices that have a special meaning for each of them.
At the March for Science in Seattle, I proudly wore this hat. Although Mary-Claire King, who is credited with the discovery of the so-called “breast cancer genes,” was unable to march in Seattle, my mother knit her cap as a thank you for a lifetime of work that has impacted so many. Mary-Claire would probably explain that the DNA helix knit into her cap represented what she learned over 40 years ago—that some of the secrets to understanding breast and ovarian cancer risk were in that very DNA helix. The helix also has special meaning for my family: for my mother, who wore her hat as she marched in a small town in NE Ohio; for her sister, also a breast cancer survivor who wore her cap while she marched solo in her neighborhood in Chicago while walking her dog; and for myself, who marched in rainy Seattle. For my family, that DNA helix represents work that remains. We must continue research to discover the genetic secret of my family’s breast cancers, and the genetic secrets of others that remain hidden somewhere in that DNA helix. Someday, the work of scientists will reveal the reason for the many cases of cancer in our families.

Marching for the future of science

Learning you have cancer is devastating. Unfortunately, that will happen to nearly 1.7 million Americans this year. While not all of them will survive the disease, many will, thanks to scientific advancements that have resulted from decades of consistent national investments in biomedical research.
In the United States, Congress approves annual funding for the National Institutes of Health (NIH). While the NIH supports its own group of research laboratories, most of its funds are distributed and enable scientific endeavors around the country. This NIH-funded research has produced many medical breakthroughs, including the identification and cloning of BRCA1, BRCA2, Lynch Syndrome genes, CHEK2, PALB2, and other genes that predispose to breast, ovarian and other inherited cancers. This necessary funding also led to improved outcomes from increased screening and risk-reducing surgeries. In addition, government funding supported research dedicated to understanding how these genes normally function in a cell and how their defects might be exploited for treatment, including development of PARP inhibitors.

Congress recently passed the 21st Century Cures Act with bipartisan support; however, this will advance research only if our elected officials follow through. Progress against cancer takes years due to the research involved, but the results are clear and remarkable. Just ask a previvor.

Yesterday, thousands of scientists and supporters of science marched to continue that progress. Yet new funding proposals would cut current spending on biomedical research by 20 percent—that would be devastating for patients, their families, scientists, and it would dramatically impede our progress in the fight agai 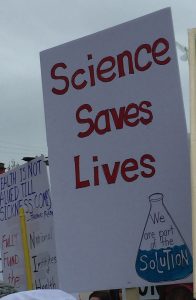 nst cancer. Urging our leaders in Washington to carefully rethink any proposed cuts in NIH funding, many marchers vocally expressed concern that we may also lose a generation of future researchers, who could be discouraged from pursuing a career in science due to a lack of funding opportunities.

Today, my family and I marched with others around the world to make our voices heard, to have a say in research, and to understand how we can improve our outcomes. We marched for those who have yet to be diagnosed with cancer. We marched for families like mine, who do not yet understand the genetic component that contributes to their familial cancer. Most importantly, we marched for the future.

Nell Dunn says:
I am so proud to know you! It is comforting to know that you, and those like you, are out there expanding the knowledge that makes life better. Thank you for your dedication and work. I love you!!