Beth Caldwell is a former civil rights lawyer, a mother of two, and a wife who was diagnosed with stage 4 metastatic breast cancer when she 37. Mary Brophy Marcus covered Beth’s story in her piece, “The hardest part” of breast cancer under 40, for CBS News. (11/8/16) 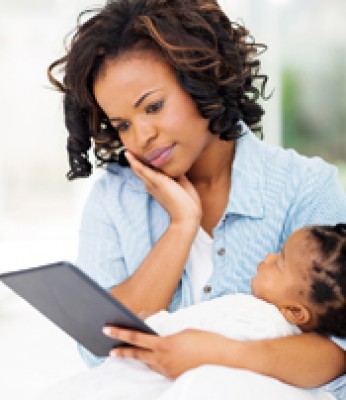 Since Beth was diagnosed at a young age, she has had some different concerns than older diagnosed women. Beth is often the youngest patient in her oncology clinic, as the average age of breast cancer diagnosis is typically in the 60s for women. “Younger women often feel isolated because they don’t know other women their age who have had breast cancer,” says Dr. Julie Gralow, the director of breast medical oncology at Seattle Cancer Care Alliance, in the piece.

The story highlights Beth’s difficulties relating with other young women who don’t have cancer: “The women at school, the ones you only know through your children, those conversations often remain very awkward. A few I’ve remained friends with. But it’s the ‘broken neck sad face’ – they tilt their head sideways and make that sad, pitying face.”

In some cases, younger women with breast cancer may also be dating -- How do you bring up a cancer diagnosis to a new partner? And a cancer diagnosis still brings many stresses to married couples. If the diagnosed patient does not have a caring partner, it can make problems that already exist worse and also cause new problems. The CBS news story takes notice that some partners may not be able to handle the fact that their partner may die.

Women who are diagnosed during childbearing years may have still wanted more children or have young children. Women who wish to have children may wonder how their treatment may influence their ability of becoming pregnant.  Those with young children must balance motherhood with treatment and find ways to talk to their children about breast cancer. In the CBS News story, how it will affect her children is featured as one of the hardest parts of Beth’s diagnosis. Beth talks about conversations she has had with her children throughout the piece. She is honest with them, but says it is hard.

Women who are diagnosed with cancer at a younger age typically have more aggressive cancers. And while breast cancer is curable when it is caught early, once the cancer has spread beyond the breast and , there is currently no cure – only treatment. The special needs of women with breast cancer are also highlighted in the CBS News story. Beth tells us in her own words-- “For many, in the early , it’s like, ‘You’re in the sorority now,’ but that really didn’t fit with the life I was living and the fears I have to live with and that the median survival for it is still pretty short. I think I felt most alone at that point.”

After her diagnosis, Beth had to give up her position as a civil rights lawyer. “When I was first diagnosed, I knew I was 4 and I thought I’d go through heavy-duty treatment for a bit and it’d go back to normal, but that was sort of a pipe dream. It’s not the way 4 works,” Beth says in the piece. Cancer treatment can take a toll of the body and many people find it difficult to work or are not able to work.

Other ways breast cancer before age 50 is different

Most women diagnosed before age 40 are not getting regular mammograms.  Beth found a lump in her breast when she was 37, and was diagnosed after telling her doctor about it. The American Cancer Society (ACS) recommends that all women should “be familiar with how their breasts normally look and feel and report any changes to a health care professional right away.” While there is some controversy on testing women for breast cancer before age 50, many organizations including the National Comprehensive Cancer Network (NCCN), the American Medical Association (AMA), the American College of Radiology (ACR), and the American Congress of Obstetricians and Gynecologists (ACOG) recommend annual mammograms beginning at age 40, while the American Cancer Society (ACS) recommends beginning at 45.

One thing that this CBS News piece did not bring up is genetic testing. All women diagnosed with breast cancer before age 50 meet national recommendations for genetic testing. Breast cancer at age 37 alone qualifies a woman for testing but many may think they are only at risk if they have a family history of breast cancer. It is important to remember that there are reasons why a family history of breast cancer would not be easily identified, such as small family sizes or a family with mostly men (while men with mutations are more likely to get breast cancer than men of the average population, the chance is still not nearly as high as it is for women). Knowing if you have a mutation in or another gene that increases your chance of being diagnosed with cancer has further implications, such as your likelihood for other cancers and cancer in other family members, and the possibility of qualifying for clinical trials of drugs that target specific mutations, such as PARP inhibitors.

What can be done?

Beth talks about how attending a conference held by Living Beyond Breast Cancer (LBBC) helped ease her feelings of isolation. She was able to meet people who were experiencing the same things she was.

There are a number of advocacy organizations that hold conferences for women with breast cancer, now.

At the LBBC conference, Beth learned that the majority of research funding does not go to breast cancer research, and she began to advocate for increased funding.  There are many opportunities for young breast cancer survivors and people with breast cancer to become more involved in advocacy.  Training programs for patients include:

CBS News: “The hardest part” of breast cancer under 40.