Article: Parents face challenges when deciding the best time to tell children that they may be at high risk for cancer

When certain types of cancers run in families, genetic testing can determine whether the cause is hereditary. Genetic testing can help family members understand their cancer risk and make medical decisions to stay healthy. A test result can provide significant insight, but it also creates challenges for parents, because gene mutations that cause hereditary cancers can be passed from mothers and fathers to sons and daughters. People with these mutations must make difficult decisions about when to tell their children that they too may have inherited the mutation. (8/22/2017) 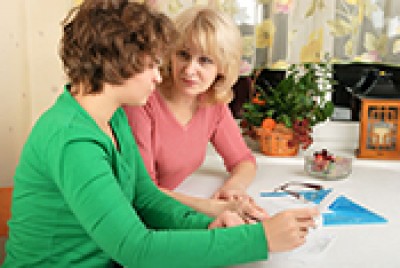 When should parents tell their children that they (the children) may have inherited a gene mutation that increases their cancer risk?

This question is the basis of Jill Werman Harris’ New York Times article, “When to Tell Daughters About a Genetic Breast Cancer Risk.”

Harris tells the stories of various mothers and daughters, including Angela Durden. When Durden learned that she carried a mutation, she decided to tell her 14-year-old daughter Alexis about her own future risk—that she had a 50 percent chance of inheriting Durden’s mutation. Alexis’s first concern was that her mother might get sick or die. However, Durden was unprepared when her daughter said she too wanted to be tested. Durden said, “She said she would get tested as soon as she could and if she was positive, she was going to have a double mastectomy.”

Ann Little, a special-education teacher who is also a mutation carrier, chose not to tell her youngest daughter, who was 13 at the time, of her mutation status. Little said, “I hated the idea that just as she was starting to develop breasts, she would have to think about losing them.”

Harris also tells the story of Dr. Jill Stoller, a pediatrician with a mutation. According to Dr. Stoller, her daughter felt that the stress of not knowing was worse than the stress of knowing.

Should you or shouldn’t you? There are arguments for and against telling young children and adolescents about the possibility of inheriting a gene that increases their cancer risk.

A 2015 study (which Harris cited in her NYT piece, and XRAYS covered in November 2015) by Dr. Angela Bradbury looked at the impact on young girls of knowing that they have increased risk of developing breast cancer.  The study, which included 869 mother-daughter pairs (441 pairs were from families with a history of breast cancer, while 428 were not) found that while adolescent girls from high-risk families worried more about the risk of breast cancer, their psychosocial adjustment was similar to their average-risk peers—girls from both groups were generally well-adjusted.  This study also found that girls from high-risk families had higher self-esteem compared to their peers.  “We aren’t seeing huge red flags about negative outcomes for them,” said Bradbury.

Other experts suggest that teens may benefit from learning that they may inherit a family mutation; because the possibility of developing cancer is distant, adolescents have time to develop coping strategies if they test positive as adults.

However, the study by Bradbury also suggested that girls from high-risk families had more breast cancer-specific distress than girls who were not. Dr. Ruth Oratz, a medical oncology and breast cancer specialist who was not part of Dr. Bradbury’s study, worries that letting children know about a potential genetic risk may “Hamper their teenager’s ability to live freely” instead of alleviating their anxiety. “Every time someone touches her breast or every time she takes her bra off, you think she’s not thinking about it?” she asks.

What do the experts say?

Experts do not typically recommend testing minors for or other mutations related to breast cancer risk, because cancer risk does not increase until adulthood. Experts do recommend that parents discuss the possibility of inheriting a genetic mutation with their daughters by age 25 and with their sons by age 35, as some screening and cancer risk management options would begin at these ages. Discussions of risk should begin at earlier ages in families with individuals who have been diagnosed with breast or ovarian cancer in their mid-twenties,

However, exactly when to tell children about their potential genetic risk falls into a grey area.  Because each child is different and each family’s issues and needs are unique, there is no right or wrong age at which to introduce genetic information to your children. “Experts recommend using your child’s age, personality and maturity as a guide,” Harris writes. While Dr. Bradbury’s study showed no general difference in psychosocial adjustment between children from high-risk families compared to children from average-risk families, FORCE advisory board members note that, “Although the children in this study did not necessarily feel more distress than their peers, parents should remember that every child and every family is unique.”

Dr. Bradbury’s study found that daughters are more likely to be anxious if their mothers are anxious.  Therefore, it is important that parents get support for themselves before they talk to their children. For her piece, Harris interviewed Karen Hurley, a clinical psychologist specializing in and a member of FORCE’s Scientific Advisory Board. Hurley states, “Whether to tell children and when and how to tell them is one of the most common reasons people seek support in the process of genetic testing.”

It is also important for parents to be open with their children when they begin discussing the possibility of inheriting a mutation. “Be straightforward and honest but don’t use confusing euphemisms or dump everything on your child at once,” Harris writes. Finally, after parents share this information with their children, it is important to pay attention to behavioral changes, including how their children are doing in school, whether their social interactions with their peers change, and how they’re sleeping, among other things that may indicate that a child needs more support. If something seems amiss or the child is not coping well, it is important to seek help.

Although Harris interviewed only mothers who had passed a gene onto their daughters, it is important to note that women and men can carry a or other high-risk mutation, and that they have a 50% chance of passing it down to any of their sons or daughters. Dr. Stoller said that finding out her daughter Jenna also carried her same mutation was one of the hardest days of her life, “I understood how my father felt when he found out that he had passed the gene on to me. He said, ‘This is not the legacy I wanted to leave my family.’”  However, Hurley reminds parents that they pass many things other than genes onto their children. In discussing a child’s potential to inherit a cancer-predisposing mutation, “You can show them how you cope when life gets hard and what you do in times of uncertainty.  You have control about what kind of parent you want to be.”

New York Times: When to tell daughters about a genetic breast cancer risk

Parents who have an inherited gene mutation

The National Comprehensive Cancer Network (NCCN) establishes guidelines for people with an inherited mutation associated with cancer. NCCN recommends against genetic testing in children younger than 18 years when results would not impact medical management.

The American Academy of Pediatrics and the American College of Medical Genetics and Genomics developed a policy statement which represents recommendations developed collaboratively with respect to genetic testing and screening in children. The policy recommends:

The following organizations have resources related to communicating with relatives about cancer risk.