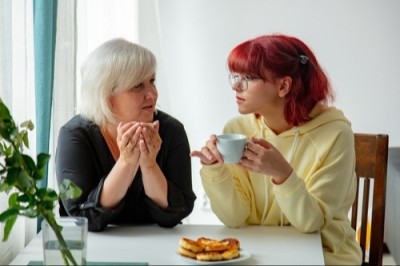 When genes raise a mom’s risk for cancer, is it OK to tell kids?

This study is about understanding how teens and young adults react to the knowledge of breast and ovarian cancer within their families.

People who have a family history of cancer or inherited mutations that increase their cancer risk face difficult decisions about when and how to tell their children about their family cancer history and/or inherited mutation. Little research has been conducted on the short- and long-term effects of this information on children’s well-being, so guidance for parents is limited. This study aimed to better understand how knowing about the risk for hereditary breast and ovarian cancer affects the health and quality of life of adolescents and young adults in high-risk families.

The study sample included 272 adolescents (ages 12 to 17) and young adults (ages 18 to 24) whose mothers had undergone testing for a mutation 1 to 5 years before the study. Mothers who disclosed their status to their children were eligible to participate if their children had not yet undergone genetic testing.

All mothers had genetic counseling and testing:

Among adolescents and young adults in the sample:

Researchers conducted a single telephone interview with the participants to assess three categories of behavioral and psychological factors:

The researchers found no difference in the adolescents’ and young adults’ risk-reducing behaviors, such as limiting alcohol and tobacco use or increasing physical activity based on their mother’s cancer history, status or the child’s biological sex.

On average, adolescents and young adults in this sample were knowledgeable about cancer, but they were not overly worried about their risk.

In general, knowledge of participants’ cancer risk did not negatively affect their well-being:

Despite these promising overall findings, the researchers noted significant differences among the participants based on their age, biological sex, maternal genetic status and cancer history:

When one family member has a personal or family history of breast or ovarian cancer or tests positive for an inherited mutation in or another high-risk gene, other relatives also are at risk of developing cancer and inheriting the same mutation. However, little is known about how younger family members react to this knowledge. A previous study showed that some adolescents and young adults make healthier lifestyle choices, such as not smoking, after learning about their possible inherited risk for cancer. Other studies have shown that young women from high-risk families might dwell on their risk and perceive it as higher than it actually is, leading to anxiety and apprehension about their health.

This study adds to the small body of research that aims to understand how teens and young adults react after learning about their family’s cancer risk. The study found that overall, telling adolescents and young adults about hereditary breast and ovarian cancer does not harm their behavior or quality of life. Knowing about their risk also increased the youths’ awareness of and knowledge about cancer, what causes it and how it can be prevented.

In general, children respond well to learning about their familial cancer risk. However, the researchers observed significant differences in cancer understanding and perceived cancer risk based on age and biological sex, as well as maternal genetic status and cancer history. Even so, these differences did not affect the behavior or quality of life of children in this study. More research on this topic is needed to confirm these conclusions.

If you are a parent who has a known inherited high-risk mutation or a personal or family history of breast or ovarian cancer, you might struggle to know when to communicate the risk to your children. This study shows that teens and young adults generally respond well to learning about their genetic risk for breast or ovarian cancer.

Beginning conversations in adolescence about familial cancer risk could lead to more open communication later in life about genetic testing, screening and preventive options. However, speaking with your child about their cancer risk is a highly personal decision, and connecting with a genetic counselor might help you navigate such conversations.

The following organizations have resources related to communicating with relatives about cancer risk.

When genes raise a mom’s risk for cancer, is it OK to tell kids?

U.S. News and World Report: When genes raise a mom’s risk for cancer, is it OK to tell kids?
Rating:  5.0 Stars