Study: Breast cancer screening should be tailored to a woman’s risk factors and breast density

The United States Preventative Services Task Force (USPSTF) recommends a screening mammogram every other year for women ages 50-74 who are at average risk for breast cancer. But do all patients in this category benefit from this screening regimen? 10/18/16 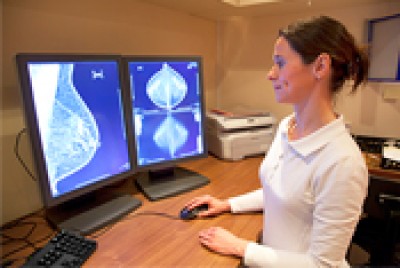 This article is most relevant for Women who are at high risk for breast cancer due to family history, dense breasts, LCIS, or multiple biopsies

The same article was also covered by

Using personal breast cancer risk and breast density to determine the frequency of for women over age 50.

The widespread use of screening and treatment has resulted in fewer breast cancer deaths for women in the United States. But along with the benefits, some harms come from detection and early intervention.

Women who are at high risk for breast cancer due to family history, dense breasts, LCIS, or multiple biopsies

The 2016 U.S. Preventive Services Task Force () made the controversial recommendation that women aged 50-74 should get every other year, rather than annually. However, do all women in this age group benefit from the same regime? Amy Trentham-Dietz and her colleagues from the University of Wisconsin Carbone Cancer Center and other institutions published work in the Annals of Internal Medicine that addresses this question.

Can a woman’s breast density and breast cancer risk be used to determine the optimal time between her ?

Researchers from the Cancer Intervention and Surveillance Modeling Network and the Breast Cancer Surveillance Consortium used three well-established models (Models E, GE, and W) to predict the benefits and harms of for women 50 years and older with various combinations of breast cancer risk and breast densities. This model used data collected from 1975-2010 by the Surveillance, Epidemiology, and End Results () program. The women modeled were at average or moderate (not greater than four times increased risk) risk for breast cancer. Factors leading to a moderate risk of breast cancer included postmenopausal obesity, a history of benign breast biopsies, and a history of lobular carcinoma in situ ().  Note that moderate breast cancer risk is not as great as the risk of women with mutations.  Benefits measured were breast cancer deaths avoided due to screening, and quality-adjusted life-years. Harmful outcomes measured were mammograms, benign biopsies, and (defined as “ cancer that would not have been diagnosed in a woman's lifetime in the absence of ”).

Because this study only included information from women who were 50 years and older, the findings do not apply to younger women. Nor did it look at women who are at higher risk of breast cancer due to a genetic mutation such as that increases breast cancer risk. And finally, because these results are predicted from a computer model, it assumes that patients will adhere to the screening schedule, which may not be the case for all women.

The conclusions also hinge on how the authors define harm and whether patients would use the same definition. For some women, being called back for additional screening or having a benign biopsy may appear to be a harm.  Other women may prefer to have this additional screening, despite the risk that a detected abnormality turns out to be something other than cancer. This points to a need for personalizing breast screening, not only based on a patient’s risk for breast cancer, but also on her preferences.

It is important to note that this paper used current guidelines for breast cancer screening in average risk women as a starting point. These guidelines are controversial and differ from others. Guidelines of numerous other organizations, including the American Cancer Society (ACS), the National Comprehensive Cancer Network (NCCN), the American Medical Association (AMA), the American College of Radiology (ACR), and the American Congress of Obstetricians and Gynecologists (ACOG) recommend annual beginning at younger ages—the ACS recommends age 45, while the other organizations recommend age 40. Recently, the NCCN added that women and their doctors consider using 3D (), which is not addressed in this study.

Separate guidelines exist for women known to be at high risk for breast cancer due to mutations in or other genes associated with increased cancer risk, a strong family history of breast cancer, and/or history of radiation treatment to the chest. In some cases, guidelines recommend combining magnetic resonance imaging () with . These types of screening were not addressed by this study.

This study suggests that a woman’s breast density and breast cancer risk can be used to tailor her breast cancer screening interval. These findings are not definitive, because they used computer models to predict the results of being screened at one-, two-, or three-year intervals. However, this research opens discussion on how to tailor screening to benefit each patient individually. Additionally, more work needs to be done to address the limitations of the study, including women who are younger and have mutations in genes that increase cancer risk.

While this study is a step towards personalizing breast cancer screening for women who do not have mutations in or other genes that increase cancer risk, more work is needed to correctly identify women who would benefit from increased screening. Patients and their health care providers should work together to determine a patients’ optimal screening regimen based on personal and family history of cancer, as well as the patient’s tolerance for the risk of false positives and/or benign biopsies.

With regards to dense breasts and screening, NCCN guidelines state the following:

Many other professional societies and organizations have breast cancer screening guidelines that differ slightly. They don't all agree on the age screening should start and how frequently they should be done.

It is important to note, that all the groups support the opportunity for women ages 40 to 49 to decide it screening is right for them.

There are laws and guidelines for screening in women with dense breasts. The laws on breast density notification vary by state. The National Comprehensive Cancer Network (NCCN) has guidelines on breast screening. The panel notes that dense breasts are associated with an increased risk for breast cancer, and they recommend the following:

The National Comprehensive Cancer Network (NCCN) provides guidelines for management of breast cancer risk in people with inherited mutations linked to breast cancer. We recommend that you speak with a genetics expert who can look at your personal and family history of cancer and help you to determine the best risk management plan.

The same article was also covered by