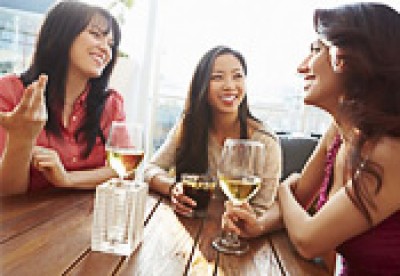 This article is most relevant for Women who drink alcohol and are concerned about their breast cancer risk.

Breast cancer risk rises even with light alcohol use

Breast cancer has many causes, most of which cannot be controlled. Drinking alcohol is a risk factor for breast cancer, people can use that information to decide if they want to change their alcohol consumption as a lifestyle modification to lower their breast cancer risk.

Many studies have pointed to alcohol consumption as a risk factor for breast cancer. This study suggests that “light” drinking can contribute to breast cancer occurrences and deaths. While the study authors define “light” drinking as less than two drinks per day, the U.S. government’s Dietary Guidelines for Americans suggests that women consume one drink per day at most. Women should try to follow these guidelines. It is important to keep in mind that consuming one drink will not cause cancer.

Women who drink alcohol and are concerned about their breast cancer risk.

Alcohol is a (something that is capable of causing cancer), and the International Agency for Research on Cancer has confirmed a relationship between alcohol and breast cancer. However, because the link between “light” alcohol consumption and breast cancer is still controversial, Kevin D. Shield and his colleagues from the Section of Cancer Surveillance published research in Alcoholism: Clinical and Experimental Research in June 2016 to better understand this relationship.

Is “light” drinking a contributor to breast cancer occurrence and mortality?

Because researchers used secondary data—they didn’t collect it themselves—they weren’t able to ask questions about alcohol consumption, or control for other issues or factors that they might have wanted to know. Additionally, they were unable to assess how “light” drinking affected women who are already at higher risk of breast cancer (due to mutations, for example). And while the researchers were able to look at the percentage of breast cancer incidence and mortality for patients 60 years old and younger and patients older than 60 years, they did not break up the age groups further (for example, 40-49, 50-59, etc.). Finally, their computer modeling does not take into account the cancer burdens between different populations, such as people from a lower socioeconomic group (where research has shown an increased breast cancer mortality) or between different ethnic groups.

This study suggests that “light” drinking does result in breast cancer occurrence and mortality for some people. While this study relied on previously collected data and estimates from a computer program to develop these results, considerable prior research has established the link between alcohol consumption and breast cancer. The Dietary Guidelines for Americans suggests women drink no more than one alcoholic drink per day.  Women should try to follow this recommendation, and to keep in mind that consuming one drink will not cause cancer. Cancer is complicated and caused by multiple factors, many of which cannot be controlled.

Breast cancer risk rises even with light alcohol use