Study: Hormone therapy and breast cancer risk after ovary removal in women with a BRCA1 mutation

Does hormone therapy (HT) alter the risk of breast cancer for woman carrying a BRCA1 mutation who have never been diagnosed with cancer? In this study, researchers showed that among women with BRCA1 mutations, HT use did not increase breast cancer rates for 10 years after ovary removal. More women taking combined estrogen plus progesterone developed breast cancer compared to those taking estrogen only, though this difference was not statistically significant. (9/7/18) 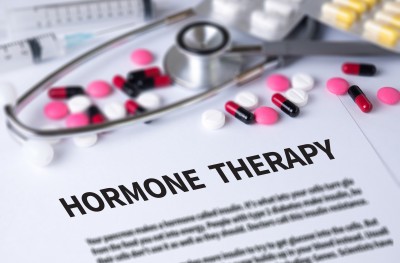 Estrogen after oophorectomy does not increase breast cancer risk.

Whether hormone therapy (HT) started after removal of the ovaries is associated with increased breast cancer risk among women with mutations who have never been diagnosed with cancer.

HT alleviates symptoms of menopause associated with removal of the ovaries (). Although review of medical records show that HT does not appear to change the risk of breast cancer for women with mutations who had their ovaries removed, no study has examined this issue. Knowing how HTs affect breast cancer risk may be helpful for decision making by women with mutations.

This study followed 872 women with mutations who had risk-reducing . Among these women, 43% chose to use HTs and 57% did not. During the study period, 92 (10.6%) of the participants were diagnosed with breast cancer:

National guidelines recommend that all women with a mutation have their ovaries and removed between the ages of 35-40 to lower their risk for ovarian cancer. If you are a previvor who has had or will have your ovaries removed, this study showed that using hormone replacement therapy for 10 years will not increase your risk of breast cancer.

Although not statistically significant, breast cancer rates were higher in women who took HT that contains progesterone compared with women who took estrogen-only HT. It’s important to note that estrogen-only HT can increase the risk for uterine cancer. Progesterone is often given to women who have had risk-reducing ovary removal but who have not removed their uterus. Progesterone can lower the risk for uterine cancer in women who take estrogen. Women who are planning risk-reducing removal of their ovaries should speak with their health care provider about whether or not they should remove their uterus at the time of surgery.

How HT use affects breast cancer risk in women with and mutations has been unclear. Several studies have shown contradictory results among women in the general population who took hormones after natural menopause. In the Women's Health Initiative (WHI)—a very well designed and large study—women using progesterone plus estrogen (versus ) had increased rates of breast cancer and heart disease. The estrogen-only group of the WHI had an increased risk of stroke but a decreased risk of breast cancer.

Whether hormone therapy (HT) started after removal of the ovaries increases breast cancer risk among women with mutations who have never been diagnosed with cancer.

This study followed 872 women with mutations who had had risk-reducing ovary removal (). Participants filled out questionnaires every 2 years about their history of cancer, reproductive and medical history, and HT use.

Participants were asked if they had been diagnosed with invasive breast cancer. Study researchers looked at whether the women who reported a breast cancer diagnosis had used HTs or not.

No statistical difference in breast cancer rates was found between women who did or did not use HTs. This indicates that HT use in general is not associated with increased breast cancer risk.

One limitation of this study is that the data came from self-reported questionnaires. However, researchers pointed out that prior studies suggest self-reported and medical records generally correspond.

This study assessed breast cancer rates for a 10-year period after ovary removal. It is unknown what results would be for HT use for longer periods of time.

The impact of HTs on women who have not removed their ovaries was not examined; only women who had undergone risk-reducing ovarian removal were evaluated. However, a case-control study by the same researchers previously showed that women with mutations without ovary removal who took HTs did not have increased rates of breast cancer as compared to women with mutations without ovary removal who did not take HTs.

If you are a previvor who has had or will have ovarian removal, this study suggests that your risk of breast cancer is not increased if you choose to use hormone replacement therapy. Estrogen-only HT is associated with less breast cancer risk than HT which contains progesterone.

The National Comprehensive Cancer Network (NCCN) provides guidelines for management of gynecologic cancer risk in people with inherited mutations linked to endometrial or ovarian cancer. We recommend that you speak with a genetics expert who can look at your personal and family history of cancer and help you to determine the best risk management plan.

The North American Menopause Society is a professional society of experts in the field of menopause.

The following are studies on menopause and menopause management for survivors and previvors:

The following resources can help you find experts who specialize in managing symptoms related to menopause:

The following organizations have resources related to menopause for survivors and previvors.

Estrogen after oophorectomy does not increase breast cancer risk.