On December 7, 2017 the New England Journal of Medicine published results from a study by Lina Mørrch of the University of Copenhagen and colleagues showing that hormonal contraceptives (birth control) increase the risk of breast cancer. The study is unique because it is one of the first to specifically assess the breast cancer risk associated with newer, low-dosage methods of contraception. The large and significant effort analyzed medical data of nearly 1.8 million young women in Denmark on average for over 10.9 years. Results were covered widely in the U.S. by many major media outlets, including the New York Times, USA Today, Forbes and Time.  (12/14/17) 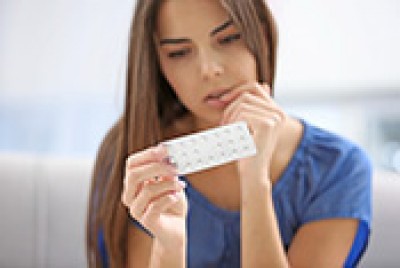 This article is most relevant for Young women on, or considering taking hormonal birth control

Effective and available, birth control is an important priority for many women around the world, including about 10 million women in America. Aside from the obvious benefit, birth control pills help to control acne, PMS, heavy periods and mood swings. Research also shows that oral contraceptives offer preventive benefits as well: slightly lower risks of ovarian, endometrial and possibly colon cancer.

Convenient, reliable and affordable, birth control pills have been used by women for more than 50 years. But are they safe? The pills release hormones, usually a combination of estrogen and progesterone, to block pregnancy by preventing ovulation. These additional hormones, especially estrogen, have long raised concerns about increasing risk for breast cancer. Studies in the 1980s found that hormone levels in birth control pills stimulated breast cells and increased risk. Newer generation oral contraceptives with lower amounts of hormones have been assumed to equate to fewer side effects, including a lower risk of breast cancer. This study tested that hypothesis among young women.

Based on the results of this study, the American College of Obstetricians and Gynecologists (ACOG), issued a Practice Advisory on Hormone Contraceptives and Breast Cancer Risk which emphasized the following points:

This study underscores the importance of shared decision making in counseling women about contraception. Shared decision making requires providing women with current and accurate information regarding the efficacy, noncontraceptive benefits, and risks associated with hormonal and nonhormonal contraceptives. This information should be provided in a clear, balanced, and supportive way to enable each woman to understand the expected outcomes associated with her various options and empower her to make an informed decision consistent with her values and preferences. Patients who are considering hormonal contraception can be counseled that:

Until recently, many women (and their doctors) believed newer hormonal contraceptives to be safer than those taken by their mothers or grandmothers, which released higher doses of estrogen. This study shows that low-dose birth control pills do slightly increase breast cancer risk in average risk women, but the is small, especially when weighed against the known benefits of oral contraceptive use. The potential breast cancer risk identified in this study must be balanced by the need for reliable contraception in this age group.

This study did not specifically look at risks in women at high risk for breast cancer due to a or other mutation. Prior data on oral contraceptive use and breast cancer risk specifically in mutation carriers is not clear, particularly for women who take birth control in their teens and early 20s. To date, data has been conflicting.

This study followed more than 1.8 million women in Denmark for over a decade. Data was collected from medical visits and prescription drug purchases.

Researchers analyzed the health records of nearly 1.8 million Danish women between ages 15 and 49 who had not had cancer or venous thromboembolism and who had not received treatment for infertility for almost 11 years. They compared women who purchased birth control methods to women who developed breast cancer.

Another important and worrisome finding involved intrauterine devices (IUDs) that dispense the hormone progestin. Compared to women who did not use an IUD, women who used an IUD that contained progestin were 21 percent more likely to develop breast cancer. Although estrogen is known to raise breast cancer risk, this finding suggests that progestin alone, which is released from some contraceptive pills and some IUDs, also raises that risk. Sometimes, an IUD with progestin is used for women who want to keep their uterus after stopping oral contraceptives to balance estrogen replacement therapy to minimize systemic progestin exposure. This study implies that this alternative may also carry risk.

The study could not take into account certain factors, including physical activity, breastfeeding and alcohol consumption, which may also influence breast cancer risk. The population studied was predominantly Caucasian so it is not known how much these results would extend to women of other races.

This research was supported by a grant from the Novo Nordisk Foundation, a self-described “independent Danish foundation with corporate interests” that supports medical research at public institutions, and by companies within the Novo Group. (Novo Nordisk is a global health care company that focuses on diabetes care. It also makes Vagifem, topical estrogen inserts designed for menopausal women.)

A postscript to the article disclosed that two of the study authors have been employed by Novo Nordisk since the manuscript was accepted for publication.

The risk of breast cancer was higher among women who used newer, low-dosage hormonal contraceptives than among women who had never used hormonal contraceptives. However, absolute increases in risk were small. This risk increased with longer durations of use. Increased risk was also was seen in women using implanted intrauterine devices (IUDs) containing the hormone progestin.

This study did not specifically look at risks in women at high risk for breast cancer due to a or other mutation. Prior data on oral contraceptive use and breast cancer risk specifically in mutation carriers is not clear, particularly for early exposure (teens and early 20s).  case control studies show no impact but all studies actually do show an impact. Generally, studies are considered to be more informative than studies.

For mutation carriers, from 2014 concluded that case control studies did not show an association between mutation status and oral contraceptive use and breast cancer but cohort studies did.  The combined cohort studies revealed an increased of 1.5 which can be significant for mutation carriers whose risk is already quite high. Similar findings were found for and breast cancer risk.