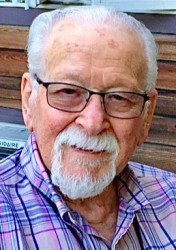 We lost our hero, Lester Citrin, on March 3, 2022, at age 98. A dedicated diagnostic radiologist and Chief of Radiology at St. Mary's Hospital in Troy, NY, until his retirement in 1996, just 100 years after W.C Rontgen discovered x-ray. He was a well-respected mentor on the front lines when screening mammography came into use. He realized mammography's shortcomings and looked forward to seeing innovation. With the evolution of digital mammography in 2000 and breast tomosynthesis in 2011, radiologists observe breast tissue layer by layer, allowing for better visualization and diagnosis of heredity cancers. Had 3D breast imaging technology evolved earlier, Dr. Citrin might not have retired at age 72. He loved his profession, the physicians he worked with, and the ability to be an integral partner in patient care. We hope continued improvements in technology, medical research, and prevention will eradicate cancer one day.

Please consider a donation in Lester Citrin's memory to further the evolution of imaging and medical research focused on cancer prevention and to enable individuals facing a risk of cancer to be empowered.

The world lost one of the greats of the Greatest Generation on March 3, 2022. Lester Irving Citrin died peacefully at the age of 98, revered by all who knew him. Son, brother, husband, father, grandfather, great-grandfather, WWII veteran, physician, mentor, and friend, it was his gentle spirit and pure heart that permeated all aspects of his life. He was born on February 18,1924 in Brooklyn, NY, to his beloved parents, Henry and Lena (Cash) Citrin, to whom he remained devoted throughout their lives.

With her limited resources, Lester’s mother purchased the Encyclopedia Britannica, which he began reading in fifth grade. He recalls reading the entire encyclopedia— perhaps the foundation of his lifelong curiosity and love of learning. He attended Lafayette High School in Brooklyn and graduated from the University of Michigan with a major in zoology in 1943 at the age of nineteen. He enrolled in graduate school at Columbia University but was soon called to serve in the U.S. Navy where he taught hand-to-hand combat and navigation skills. After sustaining a serious knee injury, he was granted an honorable discharge.

Following his discharge, Lester attended medical school at SUNY Downstate University, interned at Morrisania City Hospital in the Bronx, and completed his residency in radiology at the Bronx Veterans Administration Hospital. It was there he spotted the love of his life, Miriam Friedenthal, across the room. Six months later, in April 1952, they married. They completed their respective residencies and moved to the Capital District in 1955. Dr. Citrin became the Chief of Radiology at St. Mary’s Hospital in Troy, NY, where he would work for his entire career, mentoring many young radiologists who respected him greatly and with whom he remained lifelong friends. He retired from practice at the age of 72. Retirement meant even more time for opera, ballet, concerts at Tanglewood and SPAC, and voracious reading—Encyclopedia Britannica complete, he moved on to reading the entirety of the Sunday Times and the New Yorker each week.

Though he loved his work, family was his priority, and he did everything he could to enrich the lives of his wife and his three daughters, Joan, Myra, and Beth. His love was deep and unconditional. He encouraged his children to follow their passions, allowing them to spread their wings, even though that meant he would constantly worry about their safety. He was rarely judgmental and always humble—though he was immensely proud of his children and grandchildren, he was never boastful.

Lester loved the natural world; his knowledge of mammals, plants, birds, and geography was expansive. With his dear friend Clifford Tepper, he donated land to create the Schoharie Creek Nature Preserve, allowing future generations to enjoy the pristine waterfalls and hardwood forests both men had shared with their families. His life felt more complete with a dog (or two) by his side, and he loved riding his horse, Charlie. He enjoyed travel—especially long road trips—and visited five of the seven continents accompanied by family and friends. Lester loved a good story and enjoyed telling his own, more so as he aged. His sense of humor was dry and often surprising. Many stories were told on the deck of his Lake George summer home, where he delighted his children and their children.

Lester lost his beloved wife, Miriam, just before the pandemic began, and he spent the rest of his days with his daughters. This allowed him his third and final cross-country journey in an RV, as well as memorable visits to California, Maine, Massachusetts, New Hampshire, Rhode Island, and Virginia. He spent many precious weeks on Lake George, reveling in the company of his children and their families. We all take great solace that during these last years of his life, cognition intact, he was never without a family member by his side.

Lester was predeceased by his parents, Lena and Henry; his siblings, Arnold, Mike, and Estelle; and Miriam, his wife of 67 years. He is survived by his daughters, Joan (Moses Goddard), Myra (Robert Millstein), and Beth (Skip West). He is also survived by his grandchildren, Jesse (Emily), Benjamin (Elaina), Daniel (Rachel), Jonathan, Julia, Rebecca, Robert, Sara, and Ross, and great-grandchildren Benjamin and James. In lieu of flowers, please consider a donation in Lester’s memory to FORCE: Facing Our Risk of Cancer Empowered. https://www.facingourrisk.org/tribute/313

Donate to this tribute

Donate Online to This Tribute

Make a donation to help improve the lives of individuals and families affected by hereditary cancer.

People who have donated to this tribute