Skip to main content
Sign Up for FORCE Newsletters
Our blog features educational information and personal perspectives relevant to the hereditary cancer community.
Education > Our Blog > What does the ‘breast cancer gene’ mean for men? For some, pancreatic and prostate cancer
Categories
Advanced Search
Subscribe
Close 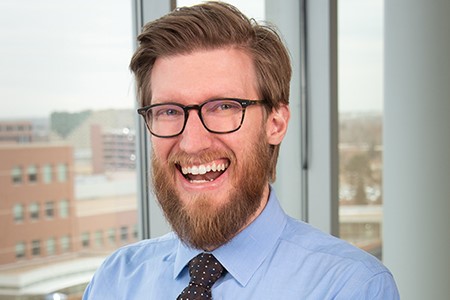 What does the ‘breast cancer gene’ mean for men? For some, pancreatic and prostate cancer

The first time I heard about BRCA was during my second year of medical school. Named after the first letters in “breast” and “cancer,” the gene can carry a hereditary mutation that affects about one in 400 people. It’s best known for increasing the risk of breast and ovarian cancer in women, but it can also lead to prostate and pancreatic cancer.

I knew my maternal grandmother died from breast cancer and her daughter—my aunt—had breast cancer when I was a kid. I vaguely wondered if my mom could have the gene, but as a man in my 20s, the “breast cancer gene” didn’t seem like something I needed to be concerned about.

I completed my medical training, got married, became a physician at the University of Colorado, and started growing my family. In 2018, a cousin on my mother’s side was diagnosed with pancreatic cancer and died two years later, leaving four young daughters without their mother. Even then, despite working as a doctor, I didn’t connect the dots that a BRCA mutation could be to blame. It wasn’t until my 64-year-old mother was diagnosed with breast cancer last March that the picture came into focus.

There’s a 50% chance that a parent will pass a mutation on to a child. Genetic testing revealed that my two sisters were negative, but I had inherited a BRCA2 mutation from our mother. While it may seem fortunate that, out of three children, the son inherited the mutation associated with women’s cancers, the reality is that BRCA is a serious health concern for men, too.

As for breast cancer, the lifetime risk is 7% for a man with BRCA2, compared to less than 1% for the average man. The mutation has also been linked to an increased risk of melanoma. Perhaps most frightening is the risk of pancreatic cancer. BRCA2 mutations are associated with a 5% to 10% lifetime risk, compared to a 1.5% lifetime risk for the general population. Considering the 5-year survival rate for pancreatic cancer is less than 10%, these odds are enough to keep a person up at night.

The good news is that knowledge is power. Knowing my BRCA2 status gives me the opportunity to make healthy decisions and practice preventative medicine, so if I do get cancer, I have better odds of catching it early and beating it. I’m only 37, but with two small children at home, I’m not taking any chances with my health.

I now do monthly self-breast exams, receive clinical breast exams every 6 to 12 months, go to the dermatologist for an annual skin cancer check, and take an annual prostate-specific antigen (PSA) test to screen for prostate cancer. I’m also enrolled in an NIH study for men with high genetic cancer risk, which involves an MRI screening every other year. Knowing my status also gives me the opportunity to inform my children and encourage them to get tested, when the time is right, so they can make the best decisions for their health and the health of their potential children.

Another unexpected benefit has come through my genetic counselor, who connected me with Facing Our Risk of Cancer Empowered (FORCE), where I try to give back by volunteering. The organization promotes hereditary cancer research and supports those with BRCA and other inherited gene mutations. Having the opportunity to talk to other people going through a similar experience has been incredibly rewarding.

Despite men and women having the same risk of inheriting a BRCA1 or 2 mutation, men are far less likely to get tested—but it doesn’t need to be that way. There are steps we can take to mitigate cancer risk, so we can see our children graduate from college, get married, and have children of their own. If you suspect hereditary runs in your family, talk to your doctor about getting genetic testing. It just makes sense.

Dr. Matthew Simpson is a primary care physician and assistant professor of Family Medicine at the University of Colorado School of Medicine.

Ron Chapdelaine says:
I was tested and didn't have the gene but in 2017 I had breast cancer and in 2020 I developed pancreatic cancer