Raising Awareness So Others Can Know Their Risk Too

Today we honor all those who are at risk or who have a mutation that causes Lynch syndrome. We raise awareness by sharing our stories and our experiences. Thank you Dana Goldman for being so open with your story so others can learn.

After Three Cancer Diagnoses, a Sense of Peace after Learning of My Lynch Syndrome Mutation

My first and second cancer diagnoses

I was first diagnosed with colon cancer in 2000 when I was in my 30s. I was young and did not know of any familial risk factors for colon cancer. The prevailing opinion at the time was that my cancer was sporadic, but I had my doubts.  I underwent surgery and six months of chemotherapy, did well and bounced back quickly.

I lived cancer-free until 2007 when a screening found a small cancerous tumor in my uterus. I had endometrial cancer. Thankfully, it was detected early, and I once again underwent successful treatment.

Given my colon and endometrial cancer diagnoses, my healthcare team believed that my cancers were related to an inherited Lynch syndrome mutation. I talked to a genetic counselor who agreed, and based on my limited family history of cancer, surmised that I could have inherited a mutation from my mother.  Because I had no siblings or children at that time and my mother was older, I did not grasp the importance of knowing that I had a mutation or not. I did not go forward with genetic testing. I decided to live life as if I did have a genetic mutation and dedicated myself to increased medical screenings and surveillance. I left it at that.

In 2010, I was again diagnosed with cancer. This time it was triple-negative breast cancer. I credit my vigilant mammograms and the radiologist who had screened me for years for catching this cancer early. I underwent a lumpectomy and radiation and recovered well. Breast cancer is not generally associated with Lynch syndrome so I continued with my planned course of seeing all my doctors regularly.

I was finally ready to know

At an appointment and upon the urging of a new gastroenterologist in 2019 I was finally convinced that it was time to know for certain whether the inherited mutation that causes Lynch syndrome was the reason for my many cancers, or whether there was any other mutation, such as BRCA. I was finally ready and the results were as expected. I have an MSH2 mutation.

I felt so many emotions after learning about my mutation. It wasn’t the worst-case scenario I believed it would be. I didn’t fall apart. My test results validated what I always knew on some level, that I had Lynch. It made me grateful that I had adhered to a strict screening regimen. It gave me a sense of power.

Now, after my 20-year odyssey, I have a wonderful healthcare team. I have important knowledge. And, with my work at FORCE, I have a community that understands all that I have been through. I am grateful for the opportunity to help others who may be affected by Lynch syndrome and other inherited mutations.

FORCE resources for those with Lynch syndrome

FORCE and our friends at AliveAndKickn created this infographic to educate and raise awareness about Lynch syndrome. 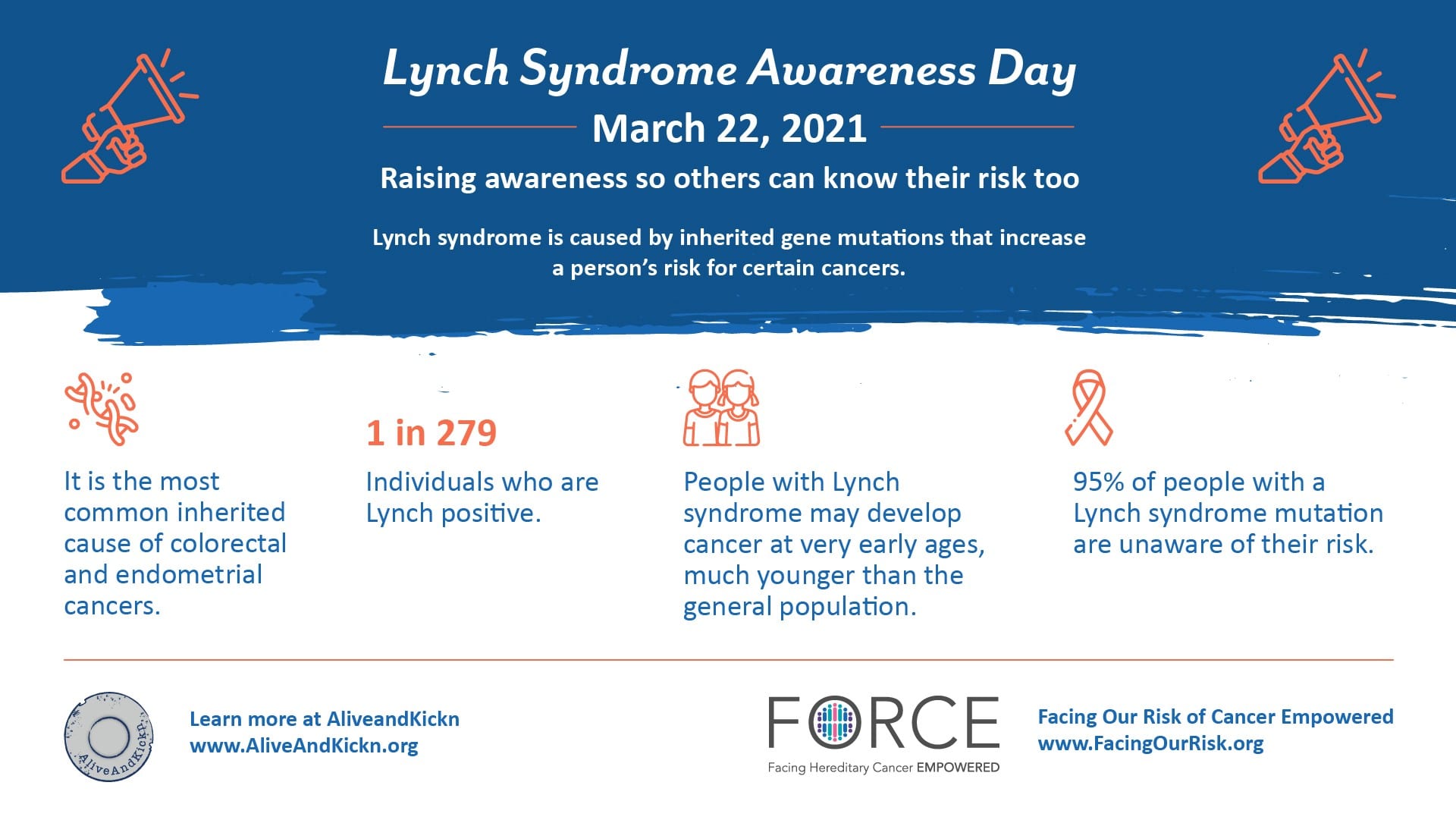