Before I was diagnosed with breast cancer at age 33, cancer was not on my radar. Despite the fact that my paternal grandmother had died young of so-called “abdominal cancer,” none of my health care providers indicated that I might be at high risk for cancer. My health care team treated my diagnosis of young-onset breast cancer like a lightning bolt out of the sky. It wasn’t until after my initial treatment (a unilateral mastectomy) that I read a magazine article and learned of several significant red flags for an inherited BRCA mutation. After reading the article I became concerned that my cancer might be hereditary. The article talked about the link between young-onset breast cancer (like mine!) and ovarian cancer (which my grandmother likely had) and BRCA mutations. It also mentioned the relevance of a family’s health history on the paternal side (in my case the only cancer in my family was on my father's side). No doctor had ever expressed interest in the cancer on my father's side of the family. Perhaps the detail that was most surprising to me was the high prevalence of BRCA mutations in people of Eastern European Jewish descent. All of the factors mentioned in the article which raised the suspicion of a mutation applied to my situation. Had I known this information before my mastectomy, I would have pursued genetic counseling and testing and made different surgical decisions at the time of my diagnosis.

Even now, 16 years after my diagnosis, as I give presentations on hereditary cancer, I still frequently meet Jewish people who have no idea of the high prevalence of BRCA mutations in this community. Most Jewish people are aware of the dangers of Tay-Sachs disease, another genetic disorder which is also prevalent in Jewish populations. Yet there are still many people who are Jewish and have a family history of cancer who have never heard of BRCA mutations and are unaware of the availability of genetic counseling and testing. Learning about BRCA   almost a year after my initial diagnosis of breast cancer was eye-opening. I learned the importance of people doing their own researching and advocating when it comes to health care decisions.

In keeping with our “13 Things” theme during 2012, I present my list of what Jewish people should know about hereditary breast and ovarian cancer, with the hope that this list will be spread far and wide beyond the FORCE community in order to save lives. 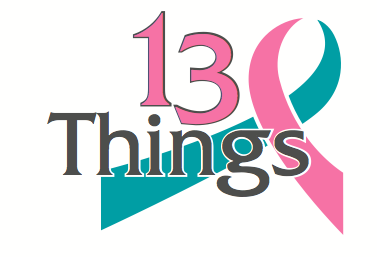 Ann Little says:
I understand that people of Jewish descent have a higher incidence of BRCA mutations and resulting cancers and of course, I support your efforts to get the word out. However, I am very concerned that there is a mis-perception that if you are not of Jewish descent, that you are not at risk. My paternal grandmother died of breast cancer at age 35 and my dad's cousin had breast cancer at 29. In spite of this, I was never worried. I was of Irish Catholic descent. Everything I had ever read about BRCA linked it to Ashkenazi Jewish heritage. Since the cancers were on my dad's side and hereditary cancers were (I believed, incorrectly) primarily in people of Jewish heritage, I did not think I was at risk. In my 50's, my sisters and I learned that we were very wrong in these assumptions. I am just concerned that the more we talk about the risk for Jewish people, the more that people who are not Jewish will think they are in the clear. Much of what you say in this blog relates to ALL people who carry these mutations. Let's keep getting THAT word out too.

facingourrisk says:
Hi Ann, Thanks for your feedback, we absolutely agree. Much of our awareness focuses on the risk factors for the general population. Of all our posts, blogs, publications, and articles, most are devoted to the larger group but there are specific concerns for people in the Jewish community that we address as well. As we mention-mutations have been found in people of every ethnicity.

Sharlene Hesse-Biber says:
All thirteen of these points are extremely important! These are exactly the issues and statistics that we discus through our BRCA1-2 pilot study at Boston College. We are trying to better understand the experiences of those who live with genetic risk - a big part of that is examining the way people react to and understand the kind of information in this article. Additionally, we hope these findings will inform the genetic counseling process. If you are or know someone who is: - A woman who has tested positive - A man with a high family history of cancer that places you and/or your children at risk - A man who has tested positive OR negative for the BRCA gene mutation PLEASE CONSIDER TAKING OR SHARING OUR SURVEY AT: https://tinyurl.com/bostoncollegeBRCAsurvey Great article - too much is too unknown to too many. More people need to hear about these facts!