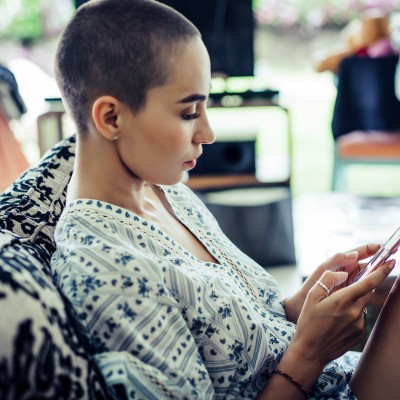 This article is most relevant for Young breast cancer patients

Whether having a mutation affects survival outcomes for breast cancer patients under age 40.

Only 5% of breast cancers occur in women under age 40, yet a significant number of deaths occur in this age group. Women diagnosed under age 40 or also more likely to test positive for a mutation compared to women who develop breast cancer later in life. Previous studies have reported conflicting outcomes regarding the survival of young breast cancer patients with a mutation compared to those who test negative for a mutation. This study is important because it shows no difference in survival between the two groups. It is also important because its scope and size underscore the accuracy of its findings.

POSH ( Outcomes in Sporadic versus Hereditary) breast cancer is an ongoing study in the United Kingdom. It is the largest study on outcomes in young breast cancer patients with and without a mutation. Researchers evaluated the outcomes (survival) of 2,733 younger women diagnosed with breast cancer; 338 (12%) were BRCA-positive. Patients were identified within the first 12 months of diagnosis and followed-up at 6 months, 12 months, and then yearly.  The study found that having a mutation did not impact young breast cancer patients’ survival, and that young BRCA-positive patients who develop had a survival advantage during the first few years after diagnosis compared to non-carriers. Lead researcher Diana M. Eccles, MD, of the University of Southampton and University Hospital Southampton NHS Foundation Trust, stated, “…our findings suggest that younger women with breast cancer who have a mutation have similar survival to women who do not carry a mutation after receiving treatment.”

If you are a young woman with a mutation who develops breast cancer, this study confirms that your survival outcome is similar to young breast cancer patients without mutations. Interestingly, this study also showed that if you are a mutation carrier with , you have a survival advantage during the first 2 years after diagnosis compared to patients who are non-carriers.

Read our related Headline Hype blogs on the misleading media coverage of this research.

POSH ( Outcomes in Sporadic versus Hereditary) breast cancer is a large, study that recruited female patients in 127 hospitals in the United Kingdom from 2000 to 2008. Patients were ages 18 to 40 when first diagnosed with invasive breast cancer. Long-term follow up is ongoing.

Nearly 90% of patients received chemotherapy. Half had breast-conserving surgery and half had a mastectomy. The researchers examined detailed clinical follow-up information, including date and site of disease recurrence, at 6 months, 12 months, and then annually.

Researchers also analyzed a specific subgroup: women with mutations who had . This group had an improved 2-year OS rate of 95% compared to 91% for BRCA-negative patients; however, this survival advantage was not observed at the 5-year or 10-year follow-up.

Since study participation was restricted to women age 40 or younger, these results may not translate to mutation carriers who are older when diagnosed. It’s also important to note that during the study recruitment period (between 2000 and 2008), testing and risk-reducing surgery were not routine for breast cancer. In addition, breast cancer treatment recommendations in the U.K. have also changed over the course of recruitment, which may have affected the survival rates. The study was conducted prior to availability of panel testing, so the number of participants with mutations outside of and is unknown.

After this study was published in Lancet Oncology last month, a number of related media articles began with sensationalized headlines, including “A Gene That ‘Causes Cancer’ Probably Doesn’t Increase Your Chances of Dying from Cancer” and “The ‘Deadly Breast Cancer Gene’ Is a Myth, Lancet Study Confirms.” Understandably, these headlines created quite a social media stir. FORCE covered the uproar in two recent Headline Hype blog posts.

Understanding survival outcomes in young carriers with breast cancer is important because these patients have increased risk of also developing ovarian cancer, contralateral (in the other breast) breast cancer, or a new primary cancer in the same breast. These risks determine treatment, and knowing that young or mutation carriers do not have different survival outcomes than non-carriers can help with patient decisions on treatment and risk reduction.

This article rates 0.0 out of 5 stars