Study: What is the risk for contralateral breast cancer in women with an inherited BRCA1, BRCA2 or TP53 mutation? 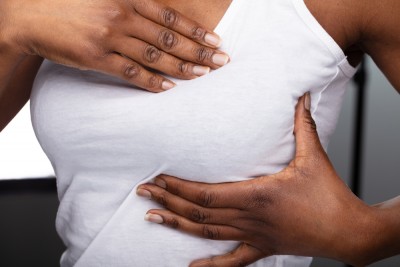 A total of 397 women diagnosed with breast cancer under age 36 participated in this study.

Women with mutations were less likely to have risk-reducing mastectomy, despite having a high risk of having a (18 times more likely than women without a mutation and twice as likely as women with a mutation).

If you have been diagnosed with breast cancer and have an inherited mutation in a gene linked to breast cancer, you may want to discuss treatment options with your healthcare provider. The rate of is high among people with a mutation in , or . This is something that you may want to consider in your decision-making about surgical options, including , mastectomy for treatment or risk-reducing  mastectomy. Ask your physician how treatment options and follow-up is impacted by having an inherited mutation. Different treatments, surveillance or clinical trials may be available.

People with inherited mutations have an increased risk of radiation-induced tumors. If you have a mutation, talk with your healthcare provider about whether you should avoid radiation therapy.

"Women with mutations in these genes should be informed of their high risk of developing a to help guide their future risk management, including the option of bilateral/ contralateral mastectomy."

The presence of an inherited mutation also increases the risk of a second breast cancer in the opposite (contralateral) breast. A review of multiple studies reported that the 10-year cumulative risks of were 27 percent and 19 percent, respectively, among women with   and mutations. Data on among women with mutation is lacking, although the National Cancer Institute’s LFS Study observed that half of individuals developed a second primary cancer, with breast cancer being the most common second cancer diagnosis.

is generally thought to be a second primary cancer. These contralateral breast cancers may be have metastasized from the first primary cancer, although metastases typically have other patterns. Women who have an inherited mutation in a gene that predisposes them to breast cancer are predicted to have higher rates of second cancers in the breast or other susceptible organs. This study examined the frequency of inherited mutations and with a focus on women under age 36 with , and mutations.

What the risk of breast cancer is in the other breast of women diagnosed with breast cancer at a young age (under 36) who had a harmful mutation in , or .

A total of 397 women diagnosed with breast cancer under age 36 participated in this study. Participants were identified from three groups in Britain: a North West England population study that enrolled participants from 1980 to 1997, referrals from St. Mary's Hospital from 1990 to 2018 and the Family History Clinic at Wythenshawe Hospital in South Manchester.

Researchers tracked health information about each participant from the time of their initial diagnosis up to 20 years later, including history of , last healthcare assessment and whether they were living or dead or had undergone risk-reducing mastectomy.

Participants diagnosed with within three months of their original breast cancer diagnoses were defined as having synchronous breast cancer (two or more primary tumors in different breasts during the same time period).

Annual rates for contralateral cancer were calculated as a proportion of the total years of follow-up until the occurred or until the participant either had risk-reducing mastectomy, left the trial or died.

60% of women diagnosed before age 36 had an inherited mutation in , or (see table).

*Excludes synchronous breast cancers that occurred within 3 months of original diagnosis
** Adjusted for women who had risk-reducing mastectomy, left the study or died.
n.d. = not reported numerically

At time of original diagnosis, women with or mutations should discuss their risk of with their healthcare providers for fully informed decision making.

Strengths of this study include:

Limitations of this study include:

In this study of a selected, high-risk sample of the British population, the majority of women diagnosed with breast cancer under age 36 have an inherited mutation. The rate of is high for women with mutation in the , or genes; this risk increases each year from the time of first diagnosis.

The National Comprehensive Cancer Network (NCCN) provides risk management guidelines for men and women with  mutations. These are listed below.

Screening and prevention for adults with a  mutation

People with  mutation carriers are advised to minimize radiation exposure due to the potential association with increased risk of a cancer diagnosis.