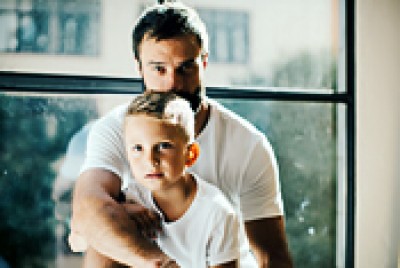 This article is most relevant for Men diagnosed with breast cancer

In her article, Cathy Free addresses the misconception that men don’t get breast cancer by telling the stories of two male breast cancer survivors, Michael Singer and Bret Miller.

“Men have breasts too”

Michael was surprised, because like many people, he didn’t think men got breast cancer. “I was embarrassed to talk about my diagnosis, except for telling my wife, Patty…I told everyone else that I had chest cancer because I just couldn’t go there with breast cancer. I felt like a freak. I felt extremely isolated.”

He was inspired to become an advocate for male breast cancer patients after watching a show that featured Bret Miller, the founder of the nonprofit Male Breast Cancer Coalition. Miller was diagnosed with breast cancer when he was 24 and had a mastectomy. He found a lump when he as 17, and experienced yellow-orange discharge from his nipples. “I want to tell men not to wait until it’s too late. Early detection saves lives, so go see a doctor if you find a lump, a discoloration or a discharge like I had.”

What does this mean for men and their breast cancer risk?

In the People piece, Free writes, “Although he’d lost his sister, Jo-ann Weiss, to breast cancer just two years before, it never occurred to Singer that breast cancer was an “equal opportunity” killer, with 2,600 men diagnosed yearly and about 440 of those dying…”

According to the American Cancer Society, the lifetime risk of breast cancer for men at general risk is about 1 in 1,000. Among 1,000 women at general risk, about 124 will develop breast cancer. This means that women are 100 times more likely to get breast cancer compared to men, so it is inaccurate to say that breast cancer is an “equal opportunity” killer. However, this does not mean that men do not get breast cancer—some men do, and it is important when men like Michael Singer and Bret Miller bring awareness to other men so that they know to act on symptoms such as lumps in their breasts and discharge from their nipples.

Mutations in and other genes increase cancer risk in men

NCCN guidelines recommend genetic counseling and testing for all men with breast cancer, regardless of their age at diagnosis.  If you have an inherited mutation in or and develop breast cancer, you may qualify for certain clinical trials, such as those involving PARP inhibitors.  Men with mutations in genes that increase cancer risk also have a 50% chance of passing the mutation down to their sons and daughters. Genetic counselors can help men with breast cancer decide if genetic testing is appropriate.

Signs of breast cancer in men

The American Cancer Society notes the following signs of breast cancer in men:

Ultimately, men should be aware of changes in their body. “If I had known that the yellow-orange discharge I was seeing was a major sign of breast cancer, I would have been proactive and gone in much earlier,” Bret Miller shared in the People piece. Even though the risk of men developing breast cancer is low, it is not impossible, so men should report any of these changes in their breasts to a healthcare provider.

The National Comprehensive Cancer Network (NCCN) has a panel of experts who address male breast cancer in their breast cancer treatment guidelines.