Ovarian cancer survivor Stephanie Hess shared her personal story about how she coped with hair loss. This XRAY review also includes treatments to reduce this common side effect of chemotherapy. (9/28/20) 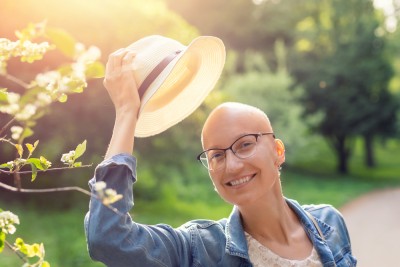 When Stephanie Hess was diagnosed with III ovarian cancer, she knew what to expect. She had watched her mother and other family members cope with the side effects of chemotherapy.

“Because my mom had passed away from cancer, I knew what it felt like. The thought of losing your hair, that’s the ultimate indicator of being a cancer patient.” she says. “I didn’t want to be bald.”

Hair loss is often the most common and visually striking side effect of chemotherapy, especially for women with cancer. Many different types of chemotherapy drugs cause hair loss.

Both men and women report that hair loss is one of the side effects of chemotherapy they fear most. Studies show that 58 percent of patients consider hair loss the worst side effect of chemotherapy, and that up to eight percent consider not having treatment for fear of losing their hair. Chemotherapy may also cause changes in hair texture, quality, amount and color.

Studies show that women undergoing chemotherapy more often have hair loss than men. For women, hair can represent their identity, personality, sexuality and femininity. Women also report a more negative body image as well as lower psychological, social, physical and emotional well-being than women who do not lose their hair.

Chemotherapy does not discriminate

Chemotherapy drugs are powerful. They attack any rapidly growing cells. While cancer cells usually grow quickly, some normal cells, like hair cells, do as well.

Because hair cells are present all over the human body, chemotherapy can also lead to loss of eyebrow, facial and pubic hair. The type and amount of chemotherapy affects how much hair is lost during treatment.

Usually, hair begins falling out two to four weeks later after chemotherapy begins. It may fall out in clumps or may gradually thin. Your scalp may also be tender. Hair loss usually continues throughout chemotherapy and may continue up to a few weeks after treatment ends. Hair typically grows back once chemotherapy is over. However, hair that returns is likely to have a different texture or color than the hair you lost. This difference is usually temporary.

Like Hess, some cancer patients choose to embrace their new look. And sometimes, like Hess’s family members, loved ones show support by going bald too.

Hess said, “My cute seven-year-old son shaved his head about two weeks after I shaved mine. I had a nephew that was living in Las Vegas at the time, and he had shaved his head for me.”

Her nieces also shaved their heads. “I hadn’t asked them to. I had no idea,” she recalls. “I got a text with their shaved heads, and I just cried and cried because it was so freeing.”

Hess went out to dinner with her niece and her newly shaved head. “She didn’t wear a hat or a scarf or anything. She was completely bald. Walking into that restaurant with my niece who was bald helped me to be less afraid.

Several hair loss treatments have been studied, but none has proven to completely prevent hair loss during or after chemotherapy.

To learn more about scalping cooling read our XRAY review.

Rogaine is an FDA-approved drug approved for hair loss. It is a cream that is applied to your scalp before and during chemotherapy. While Rogaine is unlikely to prevent hair loss, some research has shown that it may speed hair regrowth.

Bimatoprost, like Rogaine, is a cream that is applied to eyelashes. Bimatoprost has been shown to be effective in treating chemotherapy-induced eyelash loss.

The impact of hair-loss is often underestimated by healthcare providers. New research from the Netherlands may help. It shows that patients’ drawings of their chemotherapy-induced hair loss may better portray their feelings before, during and after the experience than traditional methods like questionnaires. The drawings may be a way for healthcare providers to better understand their patient’s knowledge and understanding of chemotherapy-induced hair loss and how they cope with the experience.

For many, hair loss can be frustrating and stressful. Hess felt that by embracing her hair loss it empowered her. She sees her hair loss as a temporary setback rather than a permanent problem and hopes that her story can help some women make peace with their own experience.

Hess’s advice, “Find a support group. Talk to a group of people who understand what you are going through.”