The link between alcohol intake and breast cancer is well known, but most studies have involved only White women. Recently, a large study of more than 22,000 African American (AA) women found that similar to White women, increased alcohol consumption is associated with a greater risk of breast cancer. (10/27/17) 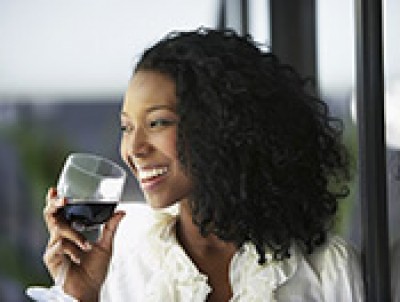 The link between alcohol and breast cancer risk in African American women.

Alcohol, like tobacco, is considered a “” that can cause cancer and fuel its growth.

Past research has shown that alcohol is a risk factor for breast cancer. But these studies have focused mostly on breast cancer risk in White women. Their are differences in breast cancer risk and mortality between women of different ethnic and racial groups. Compared to White women, African American (AA) women who develop breast cancer are more likely to have an aggressive type of cancer. For this reason, it is important for researchers to make sure that studies include a diverse group of participants.

This study looked at alcohol and breast cancer risk in African American women. The study found that similar to White women, increased alcohol consumption is associated with a greater risk of breast cancer. This is important because women may be able to lower their breast cancer risk by drinking less alcohol.

Breast cancer rates are nearly identical for African American and White women. About 12.4% of women born today will develop breast cancer sometime during their lifetime. Similar to previous studies in White women, this study found evidence that alcohol also increases breast cancer risk in African American women. However, this increase is small. For those who drink 14 or more drinks per week, the data in this study suggests that their risk would increase by only 4%. While the observation that "never drinkers" in this study also had increased risk of breast cancer, the authors indicate that they did not have information on the reasons why women did not drink. Knowing this information, could have shed light on the increased risk observed among never drinkers. The good news is that, unlike age or family history, alcohol is a modifiable risk factor—it can be changed and controlled. If you are an AA woman concerned about your risk of breast cancer, you may want to consider reducing your alcohol intake.

The results of another study (which is the featured study of this review) by Lindsay A. Williams colleagues were published in Cancer Epidemiology, Biomarkers & Prevention in May 2017. Researchers analyzed questionnaire data on alcohol intake and breast cancer diagnoses from 22,338 women from the African American Breast Cancer Epidemiology and Risk (AMBER) consortium.

Researchers of this study wanted to:

This analysis included 22,338 African American women from the AMBER consortium, which consists of four large epidemiologic studies on breast cancer: the Carolina Breast Cancer Study, the Black Women's Health Study, the Multiethnic Cohort Study and the Women's Circle of Health Study. Each study measured alcohol intake via questionnaires. The current analysis included 5,108 cases of invasive breast cancer and 17,230 controls, of whom approximately 35% were current drinkers at interview. Forty-five percent of participants were never drinkers and 20.8% were past drinkers.

The association between the number of alcoholic drinks per week (dpw) and breast cancer was estimated using statistical analysis, adjusting for any potential  (factor that may affect the relationship between variables being studied, i.e. oral contraceptive use). Results were analyzed by breast cancer subtype:

Women who previously drank alcohol but later stopped had lower risk than women who reported that they recently drank alcohol, suggesting that women may be able to reduce their breast cancer risk by reducing their alcohol consumption.

The analysis included relatively few women who drank heavily, making the findings less statistically significant. In addition, researchers did not have information on reasons for alcohol abstinence, which could shed light on the elevated risk observed among never drinkers in this study. The results of this study were derived by pooling data from 4 individual studies, and thus may be affected by differences between the studies. Finally, the results are likely impacted by (a participant’s ability to remember their alcohol consumption).

Among African American women, drinking 7 or more alcoholic drinks per week was associated with an increased risk of breast cancer, regardless of breast cancer subtype. According to the senior researcher, Melissa A. Troester, PhD, the results of this study indicate that the same risk factors that have been documented in previous research apply to Black women as well. "Alcohol is an important modifiable exposure, whereas many other risk factors are not," she said. "Women who are concerned about their risk of breast cancer could consider reducing levels of exposure."

The link between alcohol and breast cancer Is stronger

TIME: The link between alcohol and breast cancer Is stronger
Rating: 1.5 Stars