I agonized for years over whether to have a double mastectomy after I found out I have a BRCA2 mutation.

I couldn’t get past the idea that I would be removing my breasts to reduce my risk of a disease I didn’t have -- and may never get. 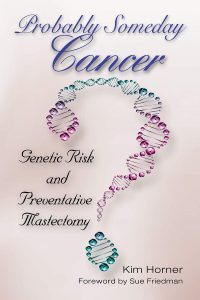 My book, Probably Someday Cancer: Genetic Risk and Preventative Mastectomy, is about my struggle to decide whether to have what I could only call ‘The Surgery’ at the time (I couldn’t utter the word mastectomy).

One of the biggest sources of information, support and comfort during that time was Facing Our Risk of Cancer Empowered (FORCE), which plays a major role in my memoir. I spent countless hours on the FORCE message boards learning about PBMs, BSOs and foobs and flew to Orlando for one of the organization’s terrific annual conferences. I am so honored and thrilled that Sue Friedman, executive director and founder of FORCE, wrote the foreword to Probably Someday Cancer.

I was 41 when I found out about my BRCA2 mutation, the same age as my grandmother was when she died of breast cancer, leaving three devastated children. My son was only one year old and the thought of anything happening to me was terrifying.

Probably Someday Cancer includes extensive research that guided me in my decision-making process. It

The book comes from the perspective of someone who has tried all of the recommended risk-reducing options, from chemoprevention to having my ovaries removed and facing surgical menopause, to increased breast surveillance. Finally, I pushed through my fear and anxiety and decided to have a double mastectomy and reconstruction with silicone implants – and received a surprising diagnosis that convinced me I made the right decision.

I hope my book can help anyone facing hereditary risk of breast and ovarian cancer feel less alone, face their own fears and make informed decisions to protect their health and end the devastation that hereditary cancer has caused for generations in so many families.

Probably Someday Cancer, winner of the book manuscript competition at the 2017 Mayborn Literary Nonfiction Conference, will be published by the University of North Texas Press on Feb. 27. I am excited to be publishing my first book. I spent 21 years as a journalist at publications including The Dallas Morning News and won numerous awards for my work, including a Rosalynn Carter Fellowship for Mental Health Journalism.

Patti Carey says:
Great post. I come from a different perspective. Was diagnosed with stage 1 breast cancer in 2002 at the age of 43. Did a lumpectomy, chemo, radiation and adjuvant chemo. My father was in hospice for prostate cancer at the time of my diagnosis, so I put off genetic testing. Finally did testing in 2013 and am CHEK2 +. Decided with my team of doctors back then, that I would do aggressive screening un til I had to have a biopsy. Decided then first time a biopsy was needed good or bad, that I would do a preventative double mastectomy. Had to have a biopsy in December of 2017 which showed atypical cells. Scheduled a PDBM for March. Pathology report showed a small new cancer growing DCIS stage 0 in opposite side of original cancer. So, my PDBM turned into a cure for me. I have no regrets about coming up with a plan at the time of genetic testing. Made my decision easier and probably helped with an early stage diagnosis the second time.

Kim Horner says:
How interesting that our stories are similar. Surgical menopause was very difficult for me as well until my doctor gave me a low dose of hormones he let me take until I was 48. Thank you so much for your kind comments. I can't agree more about FORCE!

Kim Horner says:
Thank you for reading my post! I'm so sorry to hear about your sisters' cancers. One of the things I struggle with is that, despite preventative surgeries, those of us with BRCA2 mutations face an elevated risk of cancers that are more difficult to detect or prevent, such as pancreatic and peritoneal cancers. Those give my anxiety plenty to latch on to! I am participating in a program that is exploring whether annual MRIs can help detect any early signs of pancreatic cancer. There are studies going on in this area. Regardless, I am glad I had my preventative surgeries because I feel like I have done all I can. It's worth the peace of mind. The good thing is that we have some options and everyone can decide what's right for them. I'm glad you continue to get checks and wish the best for you and your family.

Kathleen Meade says:
Having found out I carry the BRCA2 gene in my late fifties,with one sister diagnosed with ovarian, that is why we decided to be tested and took preventative surgeries. I now have 3 out of four sisters with cancer, 2 occuring after preventative surgeries, mastectomy, BSO, hysterectomy. Cancer found a way- to the pancreas with one sister, and to the peritoneal with the third. I personally am waiting for my turn but I decided for yearly MRI, 6 month mammo and ca-125 blood test. Having the BSO I decided to keep my breasts, if cancer needs a place to go let it be there. My parents lived to there 80's and 90's , no cancer. I'm feeling to much preventative may not have been good in our cases.

Marla Brichta says:
My story is almost identical to yours except I was older when I found out my BRCA status. I did the salpingo-oophorectomy following my my BRCA testing and really struggled with surgical menopause. For 5 years I did breast surveillance and chemoprevention After five years I decided to have the bilateral pbm and NEVER looked back. FORCE was the most amazing resource, support and guide in my journey. I attended a FORCE annual conference and have life long relationships with my BRCA sisters. Congrats on your book- I know it will be an invaluable resource to many.