Last month on September 14th, Lisa Schlager, FORCE VP of Public Policy, and I went to St. Louis, Missouri to give comments at the Institute for Clinical and Economic Review’s (ICER)[1] meeting on the clinical effectiveness and value of PARP inhibitors in the treatment of ovarian cancer. The meeting was one of the final steps in a six month process that began with the publication of a draft scoping document in March and ultimately led to the release of a final report in late September.

The purpose of the meeting was to convene the Midwest Comparative Effectiveness Public Advisory Council (CEPAC)[2] to discuss the evidence report produced over the previous six months. This was followed by a council vote on a series of questions regarding the value and cost-effectiveness of the PARP inhibitors olaparib, rucaparib, and niraparib as treatment for recurrent ovarian cancer among women with BRCA mutations and as maintenance therapy in women with platinum-sensitive disease.

While ICER is an independent nonprofit, its analyses may be used by health plans to determine what therapies they will cover and how much they will pay for them. Thus, patient stakeholders participation in these processes is critical to ensure that the analyses reflect the hereditary cancer community’s experiences, perspectives, and interests. To that end, in August FORCE reviewed the draft evidence report and submitted comments expressing grave concerns, and, in September, Lisa and I flew to St. Louis to reiterate these concerns, put faces and individual stories to the ovarian cancer experience, and talk about the real-world benefits of PARP inhibitors for our community.

Unfortunately, despite our efforts and the efforts of many other groups and individuals, ICER’s final report does not reflect the value of PARP inhibitors to the ovarian cancer community in general, and to the HBOC community FORCE serves in particular. ICER concludes that in terms of evidence of clinical effectiveness, olaparib, and rucaparib are promising but inconclusive in the treatment of BRCA-mutated recurrent disease and receive a grade of C+ -- meaning high certainty of at least a comparable net health benefit when used as maintenance therapy relative to placebo (i.e., surveillance alone) -- in platinum-sensitive disease (see Table 1). In terms of cost-effectiveness, ICER concludes that, except perhaps for olaparib in BRCA-mutated recurrent ovarian cancer, PARP inhibitors are not cost-effective.

The votes by the CEPAC are shown in Table 2. Of potential concern is that the votes do not appear to consistently reflect the conclusions of the report nor the input of the patient and patient advocacy community.

Table 1. ICER’s Evidence Ratings for PARP Inhibitors in the Treatment of Ovarian Cancer.

We believe that ICER’s report is flawed in several ways that make its conclusions about both the value and cost-effectiveness of PARP inhibitors problematic. Specifically:

In short, ICER’s final evidence report is based on inadequate data and mischaracterizes a number of key points that impact the value assessment. It lacks meaningful patient input – input that should be integrated into the analysis and would change the value calculus. We are deeply concerned that this report will adversely impact both the ability of ill women to access critical drugs and the ability of doctors and scientists to further study, understand, and improve on their function and value. FORCE has advocated for PARP inhibitors since their development a decade ago and will continue to advocate for patient access to these and other promising agents. 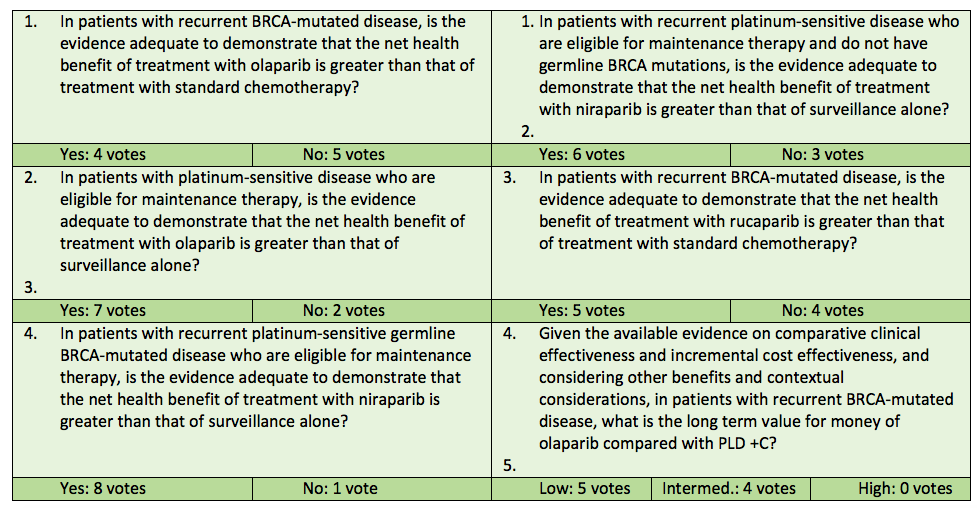 I'm grateful to FORCE for giving me the training and opportunity to participate as a volunteer in the ICER meeting and in other advocacy efforts for our community through its Research Advocate Program. As a FORCE volunteer, I am able to help the hereditary cancer community in a small way, and, at the same time, learn a tremendous amount, have new experiences, and meet interesting people. I highly recommend becoming a FORCE volunteer if you're not one already.

Jill Holdren is a BRCA1 mutation carrier and a survivor of ovarian cancer. She has a background in environmental science and public health and has been a volunteer with FORCE since January of 2016, first as a research advocate, then as a peer navigator, and finally as a peer group co-leader. She lives in Boulder, Colorado and enjoys sunny days, long hikes, and getting her hands dirty in her garden.

Where&#039;s FORCE? Winter 2017 - Facing Our Risk of Cancer Empowered - Facing Our Risk of Cancer Empowered says:
[&#8230;] Jill Holdren traveled to St. Louis to represent the hereditary ovarian cancer community at the Midwest Comparative Effectiveness Public Advisory Council (CEPAC) meeting where they testified regarding the Institute for Clinical and Economic Review (ICER) report on the [&#8230;]