To better understand how women make decisions about management of surgical menopause, FORCE and our partners at University of South Florida conducted a survey on the use of hormone replacement after risk-reducing salpingo-oophorectomy (RRSO) to remove the ovaries and tubes. This article includes some of the results from this survey.

Expert guidelines recommend that women with BRCA1 mutations have RRSO around age 35 to 40 and women with BRCA2 mutations have RRSO around age 40-45 or after the completion of childbearing.. This surgery greatly reduces the risk of certain hereditary cancers, but it also puts women into menopause. Many premenopausal women report short- and long-term menopausal complications after RRSO, including hot flashes, reduced libido, fatigue, sleep disturbances, bone loss, and heart disease. Hormone therapy has been shown to reduce some of these symptoms, but it is not risk free. Research on the benefits and risks of hormones after menopause has been mixed, and no national guidelines exist on menopause management specifically for women with hereditary cancer risk.

In a previous FORCE survey on decision-making about hysterectomy, we found that 50% of women who responded who were under age 50 and had not had breast cancer were taking hormones after RRSO. We developed the current survey to learn more about how women make decisions about managing menopause in the absence of guidelines. In this report, we discuss survey results showing who is taking hormones, how they made their decisions, and how they feel about those decisions. Later reports will discuss patient-reported menopause symptoms in women who have and have not taken hormones.

Over 500 women, including both cancer survivors and previvors, responded to our survey:

The majority of respondents had genetic testing: 52% had a BRCA1 mutation, 41% had a mutation in BRCA2, and only 2% were negative for known mutations. A much smaller number (3%) of respondents were not tested but were considered to be high risk for ovarian cancer due to their family history.

Most women are not currently taking hormones, but many took hormones at some point after RRSO

Use of hormones after RRSO varied widely. Of all respondents, 40% reported that they currently take hormones, 13% did so in the past but were no longer taking them, and 47% said they never took hormones.

Figure 1-Hormone use among all respondents

Use of hormones was more common for the group of women who were under age 50 at the time they took the survey and who have never had cancer. Of that group, 52% currently take hormones, 8% took them in the past, and 40% never used hormones. 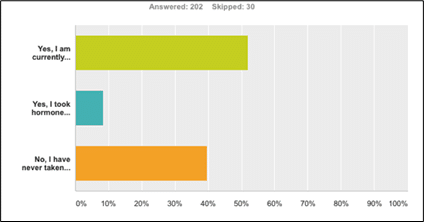 Among women who have had breast cancer:

Of the small number of women with breast cancer who are currently taking hormones, 78% indicated they were on a systemic cream, patch or oral tablet. The remainder use hormones delivered vaginally or by intrauterine device.

Figure 3-Hormone use among women who had breast cancer

We asked women under age 50 who never had cancer and are currently taking hormones about the factors that impacted their decision. The most common reasons women cited as influencing their decision to take hormones included:

The most common reasons women cited as influencing their decision against taking hormones included:

Four women noted that their health care provider indicated it would be dangerous for them to take hormones after removal of their ovaries; all four were under age 45, never had cancer, and two had undergone bilateral mastectomy.

How do women feel about their decision and its effects on their quality of life?

While most women are clearly confident in their decisions, there was less agreement on how those decisions affect their quality of life. A large majority (80%) of women currently taking hormones either strongly agreed or agreed with the statement, “I feel my quality of life is better because of my decision.” Only 36% of women who took hormones in the past but stopped, and 34% of women who have never taken them agreed with that statement.

We asked women who took hormones in the past but are not currently taking them why they stopped. The majority (51%) cited concern for cancer risk associated with hormones. Other common responses included: initially planning to take hormones only for a set period of time (30%), and stopping hormones on the recommendation of their health care provider (25%). Only 10% of women said they discontinued hormones because did not feel hormones helped them. 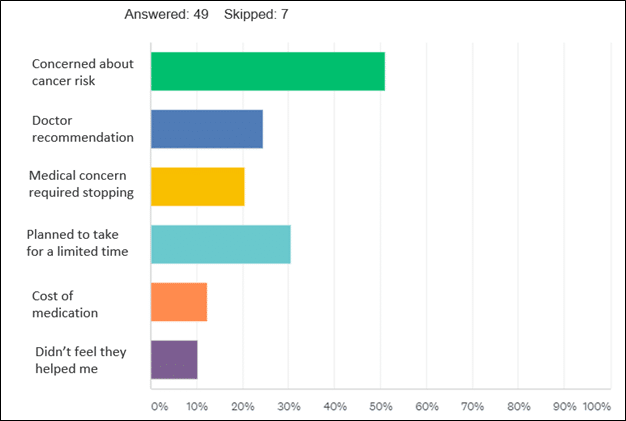 About a quarter of women felt they did not receive the information they needed regarding the risks and benefits of hormones, and some women reported receiving conflicting information

A majority of women (64%) either strongly agreed or agreed that they received the information they needed regarding the risks and benefits of hormones. However, 25% of respondents felt they did not. The need for high quality information on hormones was also noted by a number of respondents in survey comments. This was apparent from answers to our survey question that asked if the respondent agreed with the statement, “I received conflicting information from my health care provider.” Here again, we saw a difference when comparing women who take hormones to those who do not. Of women who currently take hormones, 44% either strongly agreed or agreed that they received conflicting information, while only 22% of women who never took hormones agreed or strongly agreed with the same statement. These questions point to a continued need for education of patients and health care providers as to who is a good candidate for hormones, and what the risks and benefits are for women at risk for hereditary cancer.

Many women struggle with the decisions around managing early menopause. Some of the larger and well-known studies conducted on hormone replacement therapy after menopause in the general population looked at women older than age 60 who experienced natural menopause; this population is very different from the women in our community. Our survey indicates that most women who undergo RRSO follow their doctor’s recommendations about hormones. Yet there are currently no national guidelines to guide health care providers in these recommendations. Previous research on previvors with a BRCA mutation who underwent RRSO shows that short-term hormone replacement does not increase the risk for breast cancer in this population. Our survey points to a need for more specific long-term research into the benefits and risks of hormones in women undergoing risk-reducing removal of their ovaries and fallopian tubes, especially younger women who are more years away from natural menopause. Our survey also points to the importance of health care providers staying up-to-date on research so that they can make recommendations for or against hormones based upon the best available evidence, considering a woman’s age, cancer risk, health history, and personal preferences.