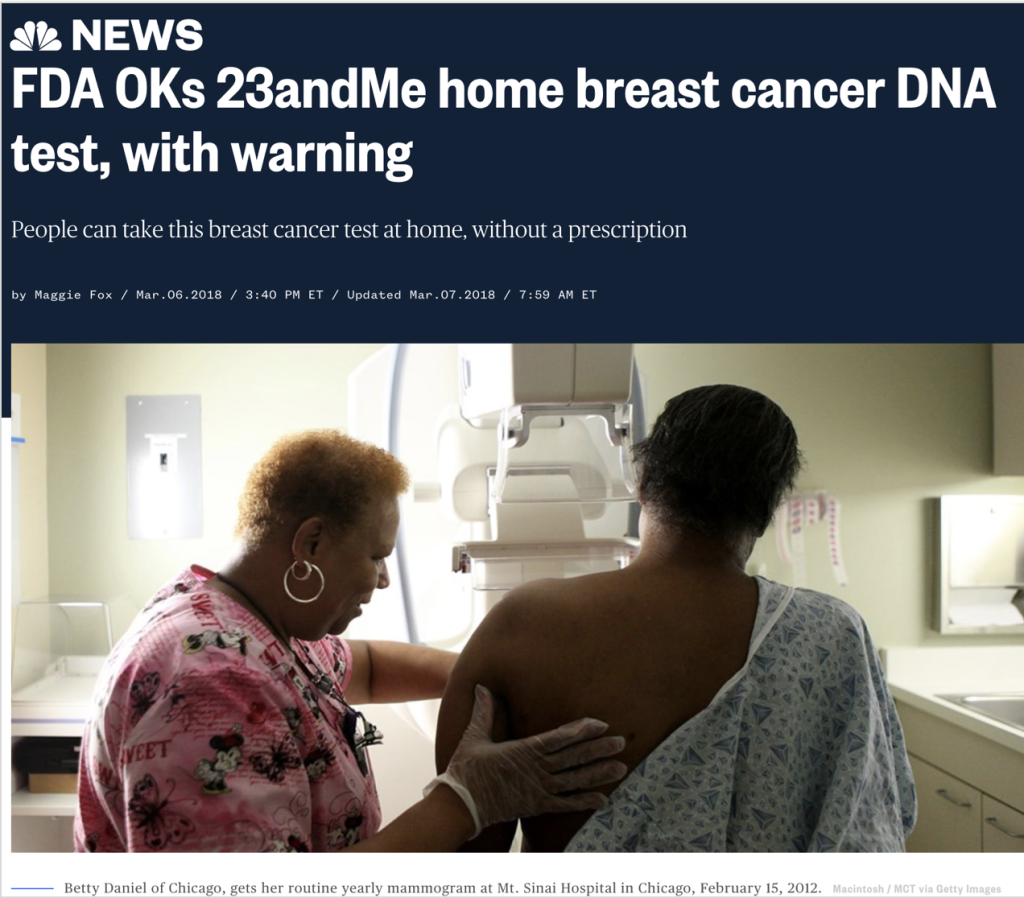 Headline Hype: A Picture as Misleading as a Thousand Words

The FDA announced last week that it had approved the first direct-to-consumer (DTC) test for 3 mutations in BRCA genes. FORCE was concerned about consumer understanding of the limited nature of the test and released a statement in response to the FDA report. The FDA announcement and the resulting media coverage will be the subject of the next XRAYS review. In the meantime, we feel compelled to comment on the more alarming aspect of the media coverage.

NBC News ran an online story titled, “FDA OKs 23andMe home breast cancer DNA test, with warning.”  Countless other media outlets picked up this story.  What is most misleading about the NBC News piece is not the headline nor the article, but the accompanying image—an African American woman getting a mammogram.  While the image alone is fine, by accompanying this article it may lead to false conclusions about the 23andMe test, which only looks at 3 specific BRCA mutations found in people of Ashkenazi (Eastern European) Jewish descent. BRCA mutations have been found in people of every ethnicity, but the test conducted by 23andMe is most appropriate for people with Eastern European Jewish heritage. Several of the articles did point out that some people only learned about their Jewish heritage by testing positive with 23andMe. Although it is always possible that people may be unaware of their Jewish ethnicity, for most people the test will not provide information about their breast cancer risk.

The mammogram image is also problematic because it is not aligned with the focus of the article, which is a direct-to-consumer DNA test.  A DNA test is not the same as a mammogram.  Importantly, the use of this image could be misleading to some women who may assume that the test can detect breast cancer and replace routine mammograms.

Finally, it is important to understand that this test is not comprehensive; it searches for only 3 of over 5,400 unique disease-associated mutations in BRCA1 and BRCA2. Nor does it test for mutations in more than 20 other high-risk breast, ovarian and related cancer genes.

This report is the third of a new FORCE blog series “Headline Hype,” which is linked to our XRAYS Program. XRAYS provides weekly summaries of research articles on breast cancer covered by the media. One of our goals with XRAYS is to help people become discerning consumers of health media.

Alert: Cancer Genetic Testing Should Be Performed in the Health Care Setting - Facing Our Risk of Cancer Empowered - Facing Our Risk of Cancer Empowered says:
[&#8230;] people about the limitations and drawbacks of this test.) We covered this approval in a prior Headline Hype blog,, we covered this issue in an XRAYS review, and we also released a public statement to educate [&#8230;]