After discovering that her mother carried the BRCA1 mutation, Ilana Feuchter of Vienna, Virginia decided to get tested as well, a decision that would ultimately lead to her diagnosis of Stage 2 ovarian cancer in November of 2013.

Ilana’s journey began in the Spring of 2013 after her mother was diagnosed with a cancer of unknown primary (CUP). While her doctors narrowed her diagnosis to ovarian cancer, she was also tested for a BRCA mutation. Her mom tested positive for a BRCA1 mutation. Soon after, Ilana had testing and learned she had inherited her mom’s mutation as well.

When she received the positive test results, Ilana decided to have elective risk-reducing removal of her ovaries and fallopian tubes as a preventative measure. All pretests including a vaginal ultrasound and CA 125 indicated that she was healthy. However, after awakening from anesthesia, she was alerted to the fact that she had Stage 2 ovarian cancer.

At the age of 45, while dealing with young teens and aging parents, Ilana chose to undergo the most intensive chemotherapy (IP cisplatin), a choice that eventually led to her remission in April 2014. While she continues to be screened every four months, she understands that without undergoing BRCA1 testing, her cancer may have grown to stage four, and like her mother’s diagnosis, would only be treatable, not curable. 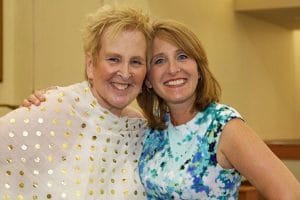 Meanwhile, her mom is doing well on avastin as a maintenance therapy for her ovarian cancer. When her cancer progresses, she will qualify for treatment with newly approved targeted therapy known as PARP inhibitors. These agents are particularly effective for ovarian cancer caused by a BRCA mutation.

Ilana’s story demonstrates that with knowledge comes power. Undergoing genetic counseling and testing give women like Ilana valuable information about new treatments and therapies that can improve outcomes and save lives. Women with a family history of cancer are recommended to go through genetic testing, a process that may seem difficult at first, but gives you and your family the information they need to take preventative steps.

Read more personal accounts from FORCE members who have shared their stories and sign up to be matched one-to-one with a peer volunteer for support and resources.