Courage and Strength are Inherited Too

It was three days after Mother’s Day 2016. I was supposed to have a “routine” colonoscopy and upper endoscopy. I say, “routine” because I had been getting colonoscopies since my early 20s following my brother’s diagnosis of early onset colon cancer. Seven years older and my only sibling, he had battled colon cancer twice, first when he was in his early 20s. I was a college freshman when I pushed a stroller with his twin girls through campus as he and his wife maneuvered doctor appointments, chemo and some time alone. Now I was 38 years old with my own toddlers, boys ages 2 and 3. It was only the two of us. Our mom died after battling at least three cancers in her life, losing the last.

It was always good news when I woke up from these screening procedures. This time, my husband had been called. Our family gastroenterologist, looked pained. He held my hand. “It looks like stage 1. We will know more after PET scan and biopsy.” His attempt to comfort me failed. But one thing he said did give me pause. It had not been two years since my last scope. If we had followed the guidelines and waited the two years, those six months would have made a terrible difference.

This doctor knew my family well. My mom, my brother and me. He’s a saint of a man who refused to charge us for his services when my brother did not have health insurance for 10 years following his second colon cancer. The angels along on our family cancer journey are ever-present.

Genetic testing was not part of the discussion when my brother was first diagnosed. The recommendation for me to be tested came from my nurse practitioner during a routine physical exam so I could have baby no. 3. I was only 17 months out from my last colonoscopy, and she wanted me to have one more before became pregnant. I was not symptomatic, and insurance would not approve the procedure. If my genetic test came back positive, national guidelines called for closer surveillance, and the scope might then be covered. I tested positive for Lynch syndrome. Off to Stanford Hospital I went for my colectomy, over three hours from home and my babies. I was released from the hospital on June 6, 2016, 10 years to the day of my mom’s death. For me, June 6 now marks life instead of death.

Before my genetic test, we knew that colon cancer was hereditary. My mom, a low-income farm worker, was often alerted of her anemia during work-related physicals. That would start a battery of tests, ordered by a loving, dedicated elderly physician at the local medical clinic. He also followed my Auntie Inez’s care (my mom’s sister), the first in my family that I can trace to be diagnosed with colon cancer. My mom was always at her sister’s side, and she was known to this doctor. So, when my mother came in with anemia, he just knew: colon cancer. I remember when the doctor gave her the diagnosis. She nodded and continued chewing her gum, like she was told that she had pimple instead of cancer. I was 8 the first time Mom was diagnosed and probably 10 the second time.

Years later, when my brother was diagnosed, my mother never flinched. Even with her last cancer, an angiosarcoma in the soft tissue of the heart, she thought she could survive it. I was a mess. I adored my mother. We cleaned houses together to put me through law school. She could not read or write English or Spanish, but she had raised a lawyer. I lived to make her proud. She sat (uninvited) in the back of courtrooms to hear me argue cases. She knew little about her own mother, who was 38 years old when she died (my mother was just 6 years old at the time). My grandmother was short with black hair, and her name was Maria; I was named for her. She got thin and then just died. Maria’s brother, my great-uncle, had colon cancer in the 1930s, before the science of ostomy bags had been perfected.

My mom’s last cancer came on suddenly, 25 years after her previous diagnosis. I was hysterical when we were told that she was terminal. I refused to leave her bedside. I was holding her when she died; she was 68 and I was 27. Diagnosed on May 1, 2006, she started chemo in the hospital on her birthday, May 18. She died less than three weeks later, on June 6, 2006. I asked God to take me too. I laid down next to my Auntie Inez, who had raised my mom and was dying of stomach cancer (her fourth cancer). I had to tell her that my mom had gone first. My aunt died one month later.

So here I am. A 43-year-old mother of three young children. Multiple surgeries. Total colectomy, dissection of 53 lymph nodes, hysterectomy, a lung embolism, punctured ulcer from complications from scar tissue, infections and hobbling from the Stanford Women’s Cancer Center to the Lucille Packard Children’s Hospital where I delivered a baby girl 18 months after my diagnosis. (I discovered I was pregnant as I was having blood work done for a hysterectomy, which is recommended for Lynch syndrome-positive females after their childbearing years.

It has not been easy, but we just keep going. As I write this, I am preparing for my annual scope next week (last year there were complications and I ended up in the hospital after Christmas). I still get anxious. But cancer families are strong. It took me a while to develop my survivor muscles, however, I am learning to wear the badge of survivor without the drama. I learned from those before me. You get used to surviving, and your survivor muscles get stronger. We don’t only pass this cancer gene, we pass courage and strength. That is inherited too. 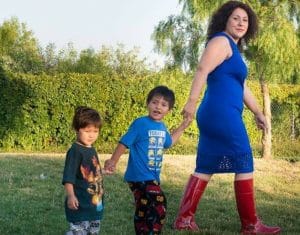 Maria began her legal career as a pro bono attorney with California Rural Legal Assistance, a non-profit organization that provides free legal services to California’s rural low-income families and senior citizens. Following the death of her mother in 2006, she left her position as a legal aid attorney and became the first Latina lawyer at Curtis Legal Group where she represents injured clients against insurance companies that attempt to take advantage of people when they are most vulnerable. She has been featured for her accomplishments in multiple publications including the Modesto Bee and Vida en el Valle. She is also a member of the Stanislaus County Bar Association and Stanislaus Lawyers Referral Service Committee.