Skip to main content
Sign Up for FORCE Newsletters
Our blog features educational information and personal perspectives relevant to the hereditary cancer community.
Education > Our Blog > A Different Kind of Trial: A Litigation Attorney's Take on Being in a National Institutes of Health Clinical Trial
Categories
Advanced Search
Subscribe
Close 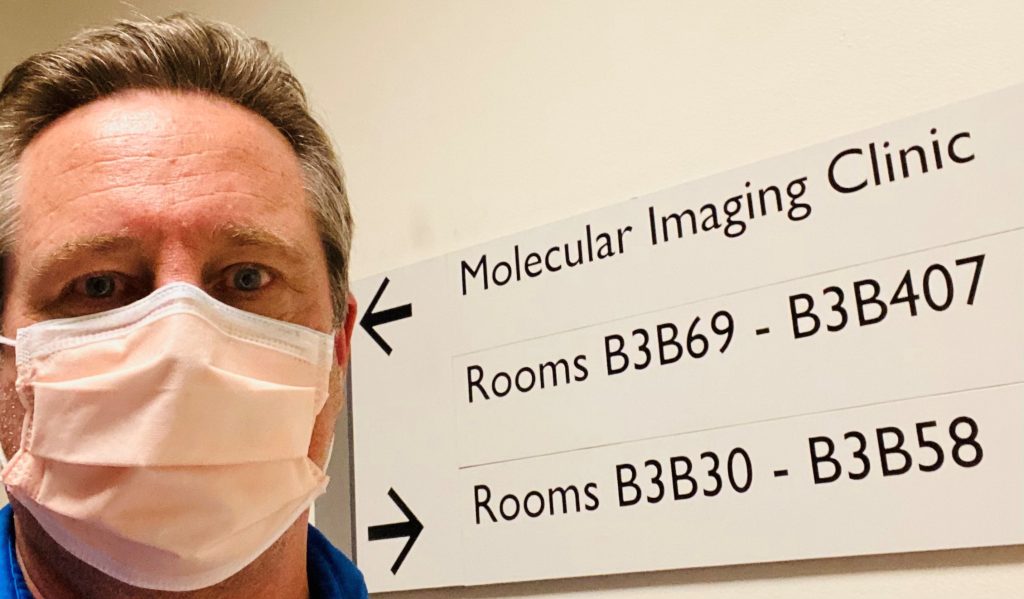 A Different Kind of Trial: A Litigation Attorney's Take on Being in a National Institutes of Health Clinical Trial

As a litigation attorney for the past 33 years, I have been involved in many trials. Recently, however, I was involved in a very different kind of trial — a clinical trial at the National Institutes of Health (NIH) in Bethesda, Maryland. I qualified for the trial because, as a man with the BRCA2 (BReast CAncer) genetic mutation, I have a high likelihood of developing prostate cancer. Other than the word “trial,” a legal trial and a clinical trial have relatively little in common. For starters, the examinations are different.  In a legal trial, examination refers to an attorney asking questions of a witness. In a prostate-related clinical trial, examination means a medical professional’s gloved and lubricated finger up the patient’s rectum to feel for prostate irregularities (a digital rectal exam or DRE).

Little did I know when I volunteered with the California Prostate Cancer Coalition (prostatecalif.org) and obtained official Los Angeles City Council recognition of Prostate Cancer Month, that several years later, prostate cancer would be uppermost on my mind. Between then and now, I learned (via a direct-to-consumer DNA test) that I have the BRCA2 mutation, which puts me at up to a 60% lifetime risk of developing prostate cancer. That’s five times greater than men in the general population, who have a 12% lifetime risk. Because of this, I qualified for a NIH/National Cancer Institute (NCI) clinical trial entitled “Natural History Study of Men at High Genetic Risk for Prostate Cancer.”

The prostate is, as many men know, a walnut-sized gland located below the bladder and surrounds the urethra. As men age, the prostate can enlarge. This can be a sign of Benign Prostatic Hypertrophy (BPH), which blocks the urethra and makes it difficult to urinate. Although BPH is not associated with prostate cancer, the prostate can develop cancer if its healthy cells change and grow out of control, forming one or more malignant tumors, which can then spread to other parts of the body if not identified and eradicated. People with inherited mutations in certain genes (including BRCA2) have an increased risk  of developing prostate cancer. As legendary lyricist Irving Berlin wrote in the Broadway musical Annie Get Your Gun, “my defenses are down.” In that case, however, it was about the male lead, Frank Butler, falling in love with Annie Oakley, not about me, as I try to defend against prostate cancer.

Through FORCE (Facing Our Risk of Cancer Empowered), (facingourrisk.org), an organization that promotes hereditary cancer research and supports those with BRCA and other inherited gene mutations, I learned of several clinical trials for which I am eligible. I was informed about a prostate cancer screening study by my FORCE “peer navigator,” an 11-year pancreatic cancer survivor. The study is seeking up to 500 men, 30 to 75 years old, without prostate cancer, who have tested positive for a mutation in any of seventeen genes that puts them at high risk. Applications are still being accepted, so if you qualify for the study, I encourage you to explore it.

Apparently, my prostate is a matter of national interest. As a participant in their study, the NIH calls me an “essential partner in the NIH research mission.” The Federal government pays for my travel expenses between L.A. and Bethesda, so they can interview and examine me, draw and analyze my blood and conduct an MRI of my prostate. I signed on to undergo this process every two years until I either get prostate cancer or die. At age 57, I hope that with regard to the NIH and me, as Humphrey Bogart famously said in the movie Casablanca, “this is the beginning of a beautiful friendship.”

My previous involvement in prostate health was merely to assist an older family member who had survived prostate cancer with his advocacy efforts, but now I have a more personal interest in the matter. No longer is it only about helping a family member and fulfilling the commandment of Tikkun Olam (the Jewish notion of helping to repair the world), but it’s also about prevention, diagnosis, treatment and a cure for a disease that millions of men and I have a high likelihood of getting.

A second NIH clinical trial in which I am participating is entitled “Profiling of Radiological Factors in Treatment and Outcomes of Prostate Cancer.” This study investigates imaging based prognostic markers of prostate cancer. And a third one is called “Genomic Services Research Program – A Study of People with Unexpected Genetic Findings.”

According to the NIH, genetic studies play an important role in cancer research by enabling doctors and scientists to learn more about cancer biology, which may lead to new ways to prevent, diagnose and/or treat cancer. And according to Curtis L. Meinert’s An Insider’s Guide to Clinical Trials, “clinical trials are the foundation of evidence-based medicine and have become essential work for many researchers and clinicians.”  FORCE’s website includes an extensive list of clinical studies for which those of us with genetic mutations may qualify. As FORCE puts it, “the only way to improve cancer detection, prevention and treatment is through research. People participating in research contribute to medical knowledge and have opportunities to receive cutting-edge care.”

According to FORCE, every man is at risk for prostate cancer, and the risk increases with age. Those of us with a BRCA mutation are more likely to develop a particularly aggressive form of prostate cancer at a younger age. In addition to one in 40 people of Ashkenazi Jewish descent having the BRCA mutation (as opposed to one in 400 in the general population), Black men — even those without a genetic mutation — also have a much higher lifetime risk of developing prostate cancer and younger-onset prostate cancer than men of other races and ethnicities. Prostate cancer is called the “silent killer,” because its symptoms are often invisible, and delayed diagnosis leads to worse outcomes.

On my “BRCA Road Trip” between Los Angeles and Bethesda, I read the book “Man to Man: Surviving Prostate Cancer” by author and publishing executive, Michael Korda, in which he painstakingly documented his battle with prostate cancer. Although Korda survived his prostate cancer battle, he regrets not taking his cancer risk more seriously, stating that “in this age of fitness consciousness, every man knows he has to think about his heart and take responsibility for its well-being; about cancer, he doesn’t want to think at all, not just out of fear, but perhaps also because there’s no set of routines you can follow to stave it off. You can’t sweat it off, or swim it off, or prevent it by getting on a treadmill every day.” Even so, not thinking about it is not the answer!

In addition to having an incredibly informative website, FORCE has an extremely worthwhile Facebook page for those of us facing heredity cancer issues. After posting an update about my NIH travels and trials on the FORCE Facebook page, I received words of encouragement, such as “Thank you for contributing to the knowledge of BRCA” and “Thank you for helping raise awareness.” (Members of the hereditary cancer community are extremely supportive of one another, which is often not the case with litigation attorneys.) One man even responded that he participated in the same study and found it to be a “lifesaver.” Wondering if he was being overly dramatic, I followed up with him and learned that his MRI unexpectedly revealed evidence of prostate cancer, he returned to the NIH for a biopsy, had a prostatectomy, and is now cancer-free and doing fine. Had it not been for the study, he would not have caught the cancer as early and might not be with us anymore. This really is a matter of life and death, and ignorance is not bliss.

At the NIH, I felt as if I was the President and had been flown by helicopter from the White House, or I was a foreign dignitary from an important ally of the United States. I was definitely not treated like just a number; and speaking of numbers, when I checked in at the NIH Clinical Center, I was provided with a number and asked to wait until the number was called. The number was 18, which in Judaism signifies life. After dinner with FORCE staff members and friends, and breakfast with a fellow FORCE volunteer, I received the best gift of all – a phone call from the NIH nurse practitioner running the genetic study, informing me that my PSA score was normal and my MRI revealed no lesions or other evidence of prostate cancer. A clean bill of health . . . for now.

Although I still need PSA blood draws, ultrasounds and DREs each year — courtesy of my local urologist — I do not return to the NIH for another two years. Although the jury is still out as to whether I will get prostate cancer, groups, such as FORCE, and government agencies, such as the NIH, along with my hometown team of healthcare providers, are providing me with a potent arsenal with which to diagnose and treat such cancer. Additionally, diet, exercise, stress reduction and other lifestyle choices will help keep me in fighting shape and better enable me to vanquish the cancer foe if it appears at my doorstep.  Bring on the next trial!

Marc Ballon says:
What a great and important article. Thank you for writing it.