Patients and health care providers are often concerned about how exercise affects lymphedema (swelling in the arm or hand) in breast cancer survivors or other women who have had lymph node biopsy at the time of mastectomy. Research on this topic has been mixed. A new study suggests that exercise after breast cancer treatment does not lead to lymphedema or worsen existing lymphedema. However, because this study was small, more work needs to be done to understand the relationship between exercise and lymphedema in cancer survivors. (2/22/17) 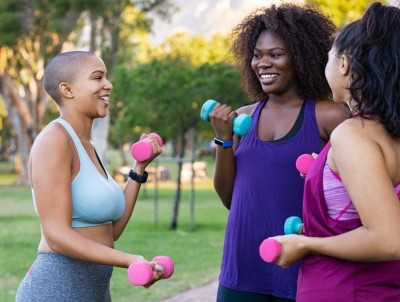 This article is most relevant for People with, or at high risk for lymphedema after breast cancer

Strength training may prevent side effect of breast cancer surgery

How exercise affects (swelling in the arm or hand) that can occur after breast cancer treatment.

Over the years, research on the relationship of exercise to has had mixed results; some studies suggested that exercise could cause cancer patients to develop or make their current worse, while other studies found that a gradual exercise program helps patients with .

After 6 months of resistance exercise training, the extent of did not change significantly.

This study suggests that women who have been treated for breast cancer can perform moderate-intensity exercise (including aerobic and strength exercises) without developing or making their existing worse. However, as other research studies in the literature contradict these findings, more work is needed to fully understand the relationship between exercise and development. Breast cancer survivors and women who have had mastectomy should report any symptoms of to their health care providers, and consult with them before beginning any type of exercise program.

People with, or at high risk for lymphedema after breast cancer

, a swelling of the arm or hand due to lymph node damage, is an adverse side effect that often occurs after breast cancer treatment. Currently there is no cure for . Patients who develop this condition can ultimately experience symptoms such as changes in sensation in the arms, a greater feeling of fatigue, and decreased quality of life. Other side effects of breast cancer treatment include decreased bone health and increased fat mass. Strength or resistance exercises can help patients to improve their bone health and weight gain that may occur.  However, some research suggests that resistance exercise may cause patients to develop or make it worse.

Emily Simonavice and colleagues from the School of Health and Human Performance in George College and State University and other institutions studied the effect of resistance exercise in women who were treated for breast cancer; their results were published in the journal Supportive Cancer Care. This is one of several recent studies that suggests that strength exercise is safe for breast cancer survivors and does not cause or make existing worse.

How does exercise affect in women who have been treated for breast cancer?

These findings are preliminary because this study did not include a control group. Although all of the women included in the study performed the moderate resistance training, the researchers could not compare between women who did and did not exercise (no information was available regarding the arm circumference changes of breast cancer survivors who did not exercise over the same period). It was also a relatively small study: just 27 women. Additionally, the study included only 3 women who already had lymphedema; too small to generalize the findings to all women with . Another reason that this study cannot be generalized is because participants had different combinations of surgery, radiation, chemotherapy, and lymph node dissection (not all women had all four treatments). Finally, the study also looked only at breast cancer survivors. The effects of exercise on previvors after risk-reducing mastectomy due to a mutation in or other gene that affects cancer risk is not addressed by this study.

This study suggests that women who have been treated for breast cancer can exercise without developing or making their worse. Because of the study’s limitations, however, more work needs to be done to fully understand the relationship between exercise and . Other researchers have explored this area—a 2009 paper in the New England Journal of Medicine by Dr. Kathryn Schmitz from the University of Pennsylvania School of Medicine showed that breast cancer patients with existing who did resistance exercise had greater improvements in the severity of their self-reported symptoms compared to patients who did not exercise. Another recent report of preliminary findings presented at the Cancer Survivorship Symposium Advancing Care and Research in 2017 found no difference in the rates of between breast cancer patients who exercised and those who did not.

All women who undergo breast surgery and/or radiation to treat breast cancer or reduce the risk of breast cancer are at risk for lymphedema; having axillary lymph node dissection increases that risk.

Current breast cancer survivorship care guidelines from the American Cancer Society and the American Society of Clinical Oncology recommend that health care providers refer patients with arm swelling or other symptoms of to a specialist who can recommend appropriate treatment. These guidelines also note that more research is required to develop clear evidence-based recommendations to prevent after breast surgery and/or radiation.   Patients concerned about should discuss symptoms with their health care providers to determine what treatment or prevention measures are best for them.

The National Comprehensive Cancer Network has guidelines on prevention. According to NCCN:

NCCN has guidelines for people diagnosed with . NCCN recommends that healthcare providers:

The following are studies are looking at prevention or treatment of .

The following resources can help you locate a expert in your area.

The following resources focus on  and cancer.

Strength training may prevent side effect of breast cancer surgery

Breast cancer survivors may knock out lymphedema by weightlifting