Dr. Kristi Funk, Angelina Jolie's Hollywood breast surgeon, is promoting her new book about breast cancer. This article from the UK newspaper The Times includes an interview with Funk about her book, which proposes that diet is responsible for breast cancer. This XRAYS addresses scientific inaccuracies in this article. (8/7/18) 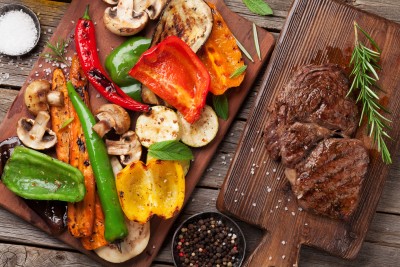 Dr. Kristi Funk, a surgeon and Angelina Jolie's doctor, who is promoting her new breast cancer book, Breasts: the Owner's Manual: Every Woman's Guide to Reducing Cancer Risk, Making Treatment Choices, and Optimizing Outcomes. We do not review the book here, but we do review an article from The Times in which she is interviewed and claims that a diet that includes meat is responsible for breast cancer. This XRAYS addresses four scientific inaccuracies in this article:

Each of these inaccuracies are discussed in detail below.

Dr. Funk is selling a book. Sensationalism and hype may help book sales and increase newspaper readership but they come at the expense of accurate scientific information.

There are medical benefits to maintaining a healthy diet particularly for heart health. Experts on diet known as nutritionists can help people improve their diet. Some lifestyle changes will have more impact on breast cancer risk than others. Weight loss, increased physical activity, and reduction of alcohol consumption provide the greatest benefit for most populations. Consult your healthcare professional about what is appropriate for you.

The American Cancer Society recommendations on nutrition and physical activity for cancer prevention include:

Other experts also provide guidelines for nutrition and health, including:

IN DEPTH REVIEW OF ARTICLE

Breast cancer, like all cancers, is a genetic disease

"Funk says that up to 90 percent of the risk factors for the disease lie in our control, “Not your doctor’s, genes or fate.”

This is incorrect for several reasons.

It is true that most breast cancers are “sporadic,” meaning that they are not due to a gene mutation you inherited from your mother or father. Inherited mutations, such as those in BRCA1 and BRCA2, are associated with about 10% of breast cancer cases. However, if you do not have an inherited mutation that does not mean that you are in control whether or not you will develop breast cancer.

Mutations are a natural part of our genes’ life cycles. DNA in cells randomly mutates throughout our lives. Some of these mutations disrupt normal cell function. Cancer develops when these random mutations prevent genes from controlling cell growth. That is why even if you have not inherited a mutation and make the best possible lifestyle choices, you still are at risk of getting cancer; no one’s risk is ever zero.

"When polled, most [women] say that breast cancer is down to genetics, when in fact 87 percent of women diagnosed do not have an immediate relative with the disease.”

Women diagnosed with breast cancer who do not have an immediate relative can still have an inherited mutation. Nearly 50% of women who test positive for BRCA genes do not have an immediate relative with disease. This may be due to chance (her relatives got lucky and did not develop cancer). It may also be due to inheriting a mutation from your father (men with a BRCA mutation have a lower cancer risk than women), small family size, or early death of female relatives for unrelated reasons as shown by Walsh and colleagues and reviewed by XRAYS.

Breast cancer is neither a result of personal choice or fate

In her article, Rumbelow states:

"Breast cancer: act of fate! It never once occurred to me that it was the other way around. That I was responsible. That I was poisoning my boobs daily, or at almost every meal."

This statement is misleading.

It implies that breast cancer is actually dependent on dietary choices. This is not true. Indeed, the whole article reads as if scientists and doctors have been “hiding” the truth about breast cancer being in patient’s control.

Although some people—especially those with a family history of breast cancer—may feel like they are destined to develop the disease, no one, not even individuals with inherited mutations, is “fated” to develop breast cancer.

If a person carries a mutation in a hereditary breast cancer gene, as Ms. Jolie does, they are not guaranteed to develop breast cancer, but their risk is certainly higher than someone without that same mutation. Researcher Mary-Claire King and colleagues observed that the lifetime risk of breast cancer among women who inherit a BRCA mutation is 82%, whereas the lifetime risk for women in the general population (without a BRCA mutation) is about 12% based on recent data (from National Cancer Institutues 2013-2015 SEER data.

Everyone’s breast cancer risk is different. Some things, such as inheriting a mutation or age of menstruation, cannot be controlled. Other things, such as exposure to agents that increase mutations (e.g., chest X-rays, the miscarriage drug DES), excessive body weight or lack of physical activity are controllable. For high-risk women with a BRCA or other mutation, risk-reducing bilateral mastectomy reduces breast cancer risk by 90 %.

It’s important for women to discuss their personal breast cancer risk and options for managing their risk with their health care provider.

This article suggests that the largest lifestyle risk for breast cancer is:

Among things that a person can change or control in their lifestyle, those with the largest impact on breast cancer are:

A life history of obesity impacts both women with and without BRCA mutations. This impact is small compared to how much inherited mutations increase lifetime risk of breast cancer.

The majority of evidence indicates that diet does not affect breast cancer risk. While some studies have had varied and inconclusive results, a meta-analysis (Hunter et al.) of 7 large studies found no association between dietary fat intake and breast cancer risk. The Women's Health Initiative conducted a randomized, controlled study of diet modification among postmenopausal women, comparing those who reduced fat intake by 20% and increased vegetable, fruit and grain intake to those who did not. Researchers found no statistical difference in invasive breast cancer rates between groups.

What about meat in diet? The article quotes Dr. Funk:

"The studies on vegans and breast cancer risk are, she concedes, somewhat muddy. The numbers of vegans have just been too low in the West, although it is worth noting that populations with low breast cancer rates typically eat little meat or dairy. The largest study on vegans and breast cancer is the Adventist Health Study, in which vegans (as opposed to vegetarians) showed a 44 percent drop in breast cancer rates compared with meat eaters, or, as the researchers wrote in the journal Cancer Epidemiology, “vegan diet seems to confer lower risk for . . . female-specific cancer than other dietary patterns”.

Kane-Diallo and colleagues conducted a large prospective trial of over 42,000 people in France, comparing how a pro-plant diet versus an animal product-based diet impacts cancer rates. They found that a pro-plant diet resulted in fewer digestive and lung cancers but saw no correlation with breast or prostate cancers. Similarly, Anderson and colleagues conducted a prospective trial looking at breast cancer and eating processed or red meat. They found no change in risk with red meat and a modest risk increase with processed meats.

What does modest mean? For processed meat, they observed a 1.21 relative risk, and combined with several other studies, a 1.09 risk in postmenopausal women (a risk of 1 is no change and 2 is twice the risk). Risk in the general population of women for breast cancer was projected to modestly increase from 12.5% to 13.5%.

In summary, no evidence has shown that meat or animal products alone lead to breast cancer. In contrast, it is clear that there are benefits to a meatless diet on cardiovascular health and risk of stomach and colorectal cancers.

There is also some evidence that dairy consumption is beneficial. A meta-study reviewing results from 22 studies with over 1.5 million participants saw a slight reduction in breast cancer risk among women who consumed modest to high amounts of dairy- in particular yogurt.

Studies that look at dietary differences are often confounded by the impact of overall weight. Some women who eat meat are heavy and others are not, just as vegan or vegetarian women can be heavy or not. Obesity impacts overall health and breast cancer risk, regardless of diet. Dr. Funk’s claim that women can avoid breast cancer by controlling their diets is false. Some dietary changes might help to modestly reduce risk if they also reduce obesity, but none will have as great an impact as the presence of an inherited mutation—something that no one gets to choose.

"Her book is full of facts I didn’t know. If you are tall you should be aware that you are more likely to get breast cancer. This means that the nations with the tallest women, such as Denmark and the Netherlands, overlap pretty heavily with the nations with the highest breast cancer rates (and the reverse goes for countries where the women are short, such as Japan). Why? Theories abound, but for Funk the clue is in the growth factors in dairy and meat, which are loved by the tallest nations."

A correlation of a trait with breast cancer does not prove that the trait causes breast cancer. People of specific ethnic groups have many genetic differences that are common within that group (genes for height, genes for hair color, genes that increase cancer risk); to equate one with the other is incorrect. Studies that have looked carefully at height and breast cancer risk have shown either 1) there is no correlation, or 2) the study was conducted within only one ethnic population (which share many genes and lifestyle traits not just diet).

When there is no scientific evidence, despite testing, to support an idea, the simplest conclusion is that the idea is wrong

"Research UK website advises women that research on the link between diet and cancer is “inconclusive and inconsistent.” The medical establishment believes it is too soon to advise women on meat or dairy."

"If the medical establishment feels the case on diet and lifestyle is still too unproven to advise women, who is left? Us?"

Scientific data does not support this premise.

It is not too soon to conclude this; this idea is incorrect. Funk's idea that eating meat or dairy causes breast cancer is false.

Dr. Funk implies that the medical establishment is being wishy-washy. Not so. This is a scientist's way of saying that diet does not cause breast cancer. Some diets seem to be very slightly associated with breast cancer in one study and then not associated in another study. These inconsistent results are expected statistically if something does NOT cause an effect and is simply occurring randomly.

The National Cancer Institute lists diet as a factor for which there is "adequate evidence of little or no association" with breast cancer. More studies will not suddenly prove that something that is untrue is now true.

Academy of Nutrition and Dietetics

Kane-Diallo A, Srour B, Sellem L, et al. "Association between a pro plant-based dietary score and cancer risk in the prospective NutriNet-Santé cohort." International Journal of Cancer. May 11, 2018. doi: 10.1002/ijc.31593.