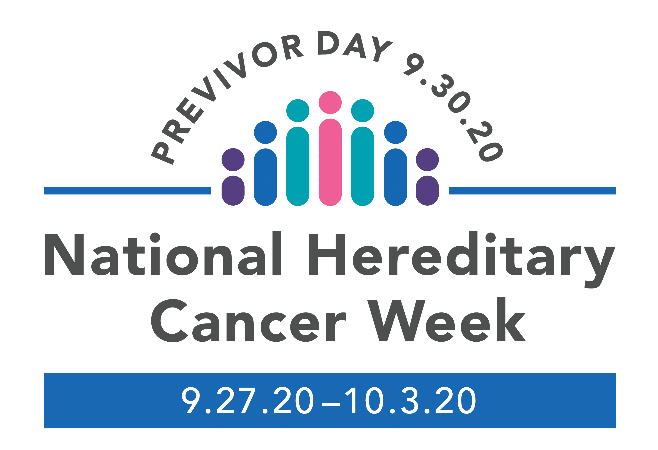 National Hereditary Cancer Week is an opportunity to shine the light on hereditary cancer, impart knowledge and save lives. Let’s join together to make a difference!

On September 15, 2010, history was made with the unanimous passage of H. Res. 1522, the Congressional resolution declaring the first-ever National Hereditary Breast and Ovarian Cancer (HBOC) Week and National Previvor Day. Ten years later, FORCE is renaming HBOC Week to recognize and honor all people affected by hereditary cancer.

September 27 – October 3 is now National Hereditary Cancer Week 2020, which includes National Previvor Day on September 30. As research in cancer genetics has progressed, FORCE has grown to support not only the hereditary breast and ovarian cancer community, but also the millions of individuals and families facing hereditary colorectal, endometrial, melanoma, pancreatic, prostate and other cancers.

National Hereditary Cancer Week is a time to recognize and honor those who have been affected by hereditary cancer. This includes people with Lynch syndrome or an inherited mutation in BRCA1/2, ATM, BRIP1,CHEK2, PALB2, PTEN, RAD51C/D or other gene associated with hereditary cancer. It is also an opportunity to acknowledge hereditary cancer survivors, previvors, caregivers and their families.

You can help us support those affected by hereditary cancer by informing others about hereditary cancer and the steps they can take to protect their health. As many as 90% of the millions of people who have a genetic mutation that causes or predisposes them to cancer are unaware of their risk. Spreading awareness will save lives.

Collectively, we can honor and remember all who have been impacted by hereditary cancer and, most importantly, spread the word so that others can learn as well. Knowledge is power! We hope you will join us in recognizing these important days.